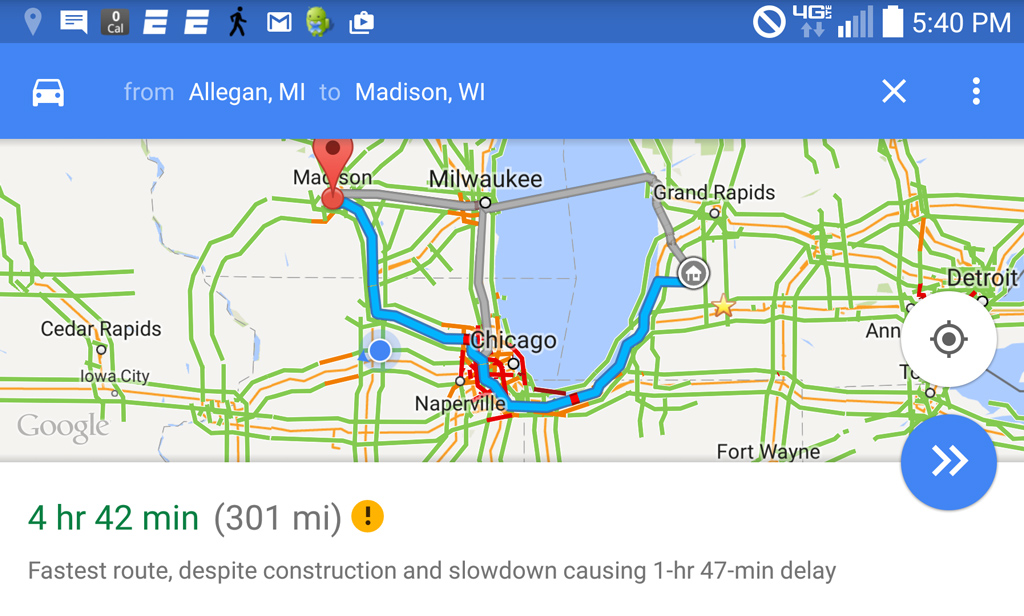 The very first day of our sixteen-month-long roadtrip started with a bang, or more of a knocking, some rain and remembering how little we missed living in the city.

To begin, the decision to embark on our journey sooner than later was hurried by a new tenant. We had been staying at Triponds Family Resort in Allegan, Michigan, and had extended our stay twice so that we could wrap up our storage unit and last minute errands before going full-time. We decided too late to stay in our first slip; someone was moving in on that Saturday, forcing us to move to a new location if we wanted to stay longer. So we did, scheduled until that Wednesday.

Then we thought that we needed more time and extended our stay a couple more days until Friday, which is all that was available, because new tenants were moving into that slip on the coming Saturday. Thus began the sculpting of a timeline. We would have liked to have stayed longer, but it wasn’t in the cards, and the stars were aligned for us to move on. Time to start this Life Untethered for real: no more practice runs, no more camping and moving out of our old life. Let’s make it happen!

Packing up went smoothly this time, or more smoothly. We had a few new items from Camping World that we needed to fit into the storage areas, but Liza had a place for everything. She even made a doughnut run in the morning and topped off the fuel in the Yukon. Brilliant. Do you like doughnuts? We do. It’s starting to become a thing.

The rigs were in good shape: we have new tires on the camper and just had a pre-trip engine check with a flush to replace all the fluids on the Yukon. I lubed up all the things needing to be lubed before gearing up, which paid off, because the hitch and sway bars were silent as we pulled out of the winding road of the campground. It was a huge improvement from the squeaking and screeching we normally hear as the metal parts get to know each other again. It was just what we needed to have a good start on our journey. And so, we were off.

We are officially off on our 1.5 yr US camping adventure, headed to Madison, WI. Peace, love, family. #LifeUntethered @srumery

We pulled out of the campground headed to Wisconsin. Woo hoo! Despite the rain, driving through Michigan was smooth sailing. The Yukon was running well and pulling the trailer with ease. Shortly after entering Indiana, however, the roads started to get bad: potholes, buckling road joints and ribbed roadways for miles. The summer construction season surely would be in full effect.

A quick road trip to Indiana may change your perspective about terrible roads in Michigan.

It was still raining as we drove through Indiana. I-94 was severely backed up, so we hopped off and headed south to 30 via the 49 to Valparaiso. From there we headed west through Merrillville, Schereville and Dyer. This stretch of the road was all start-and-stop — not really bad overall, but very, very slow. The stress came on when we approached Chicago Heights. It immediately reminded me how horrific it is to drive in and around the city. The roads were a disaster, and there was constant stopping. Nobody lets you in when you indicate your intention to change lanes, and I mean nobody. An extreme example was one fellow so set on getting in front of me that he was driving halfway in the lane of oncoming traffic as I was attempting to merge. Side by side we went until I conceded the madness and let him through to victory lane.

We continued on our adjusted route and hit the 355 Toll Road. Yes, a (another) toll road. As much as we had hoped to avoid the tolls and take more scenic routes, we felt like we had to pay our way out of this mess. There was less congestion and we did hit a good pace again. We paid the first toll, then the second and then a third. We weren’t familiar with the new toll rates, especially rates with a two axle trailer. It felt like we kept throwing money out the window. We were — we were literally throwing money out the window. Not knowing if we had enough “walking around money” was a little nerve-wracking. We kept going. Stay the course.

The 355 toll road was lined with large warehouses and office buildings without an end in sight. And, oh, the rain. The on-and-off downpouring and borderline deluge continued to follow us all the way from Allegan. I almost pulled over once, but it let up and we kept going. With nerves building up and white knuckles, Liza gave me a back rub that saved me from massive head trauma, relieving the pressure. A music change to Red Hot Chili Peppers helped, too. Onward!

From one toll station to the next, we kept on going. I started hearing a noise from the engine compartment and I wasn’t sure what it was. At the same time, Luna was playing a game on her iPad with crazy sounds, so I dismissed the engine noise. As we went through some more start-and-stop traffic, I heard the noise again, but intermittently. Without a pattern, it was hard to tell what might be going on in there. I had full engine power, breaking was responsive, all dashboard gauges were well within range and nothing was reporting on the Message Center. Liza thought is sounded belt-ish to her. We were close to the campground and just wanted this travel day to come to a close. We would investigate further after we were all settled at our new destination, rested and more alert.

When we finally made it to our new campground, we were exhausted and stressed, and it was raining still. It rained for three more days, but it allowed us to rest in our camper and familiarize ourselves with our new setting. When the sun came out, we swam in the pond and went to town to have the Yukon inspected and get to know our new town. We would settle in just fine.

Our maiden voyage (so to speak) was a bit of a mess. It created a lot of stress. Our anticipated six-hour travel day turned into just over an eight-hour day: the roads were often terrible, the rain consistent, the Friday traffic ever present, and then the engine noise. I don’t know that we will always write about our travel days specifically like this, but this one was noteworthy for sure. Hoping for more smooth sailing toward our next destinations.