At first glance, the tires on our Salem camper looked alright. After all, the trailer is only one year old, so how could they be bad already? It wasn’t until after we arrived at our second destination/practice trip that I noticed the walls of the tires were dry and cracked. Now, that was bad. Further investigation revealed that they likely would need to be replaced — all four of them!

How could this be? The trailer is used, but, really, could they be this damaged only after one year? The sun is powerful for sure, but these tires either were older than the trailer or severely neglected. It didn’t matter; we bought them and we needed to replace them.

We returned to home base in West Michigan late on a Sunday night. As per our routine, I unhitched the trailer, because we needed the truck in the morning. I took photos of the damaged area of a tire along with the specs and took them down to Ken’s Tire in Allegan for a look. The guys immediately confirmed the damage and recommended a new set. They confidently stated that the cause was sun damage (dry rot), and likely a combination of storing the trailer and tires dry and with full weight on them over the winter. Perhaps they were under-inflated as well.

We didn’t have a spare yet. That’s right, we took two trips without a spare. (Don’t try this at home.) D’ Oh! I ordered five new tires and a rim and made an appointment to get them replaced on the upcoming Friday. Even with a long trailer, the folks at Ken’s made it very easy for us. Jeff, the owner and chief operator, said to call just before coming over and they would clear a spot for us right in front of the shop. He said they would take care of it upon arrival, so we wouldn’t even have to unhitch and leave it behind. They just brought out the tools and got it done right away. We were only there for about 30 minutes. 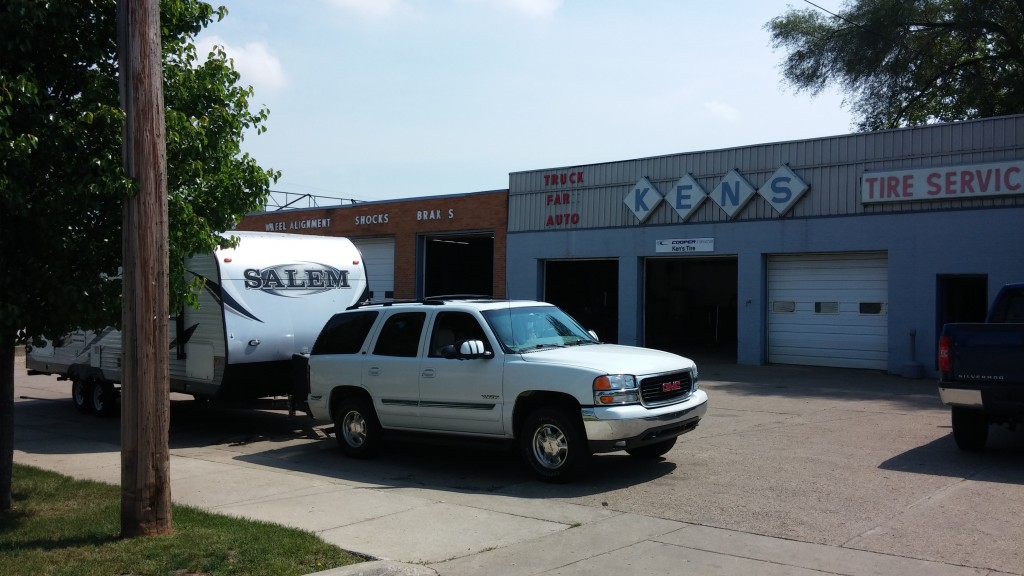 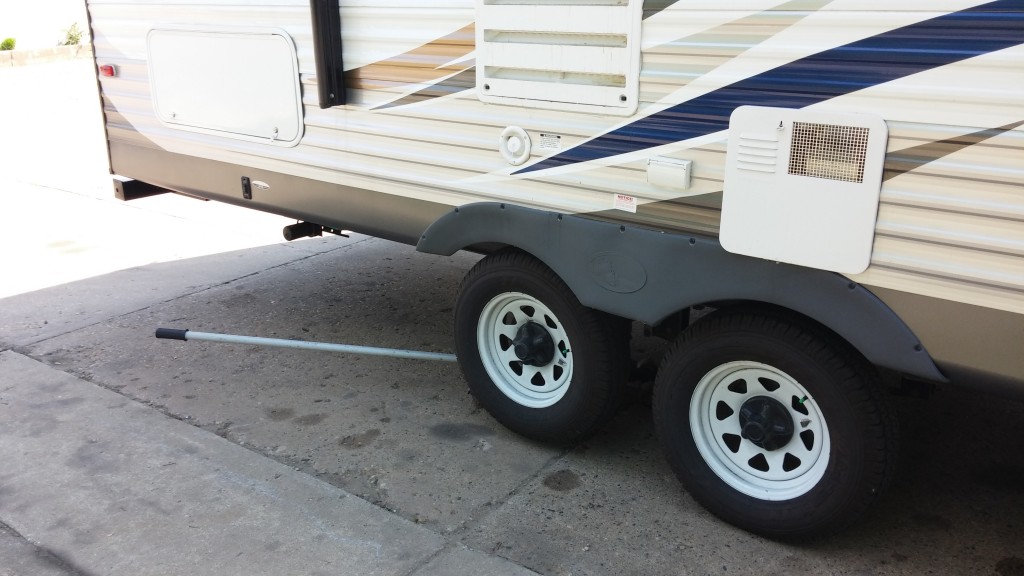 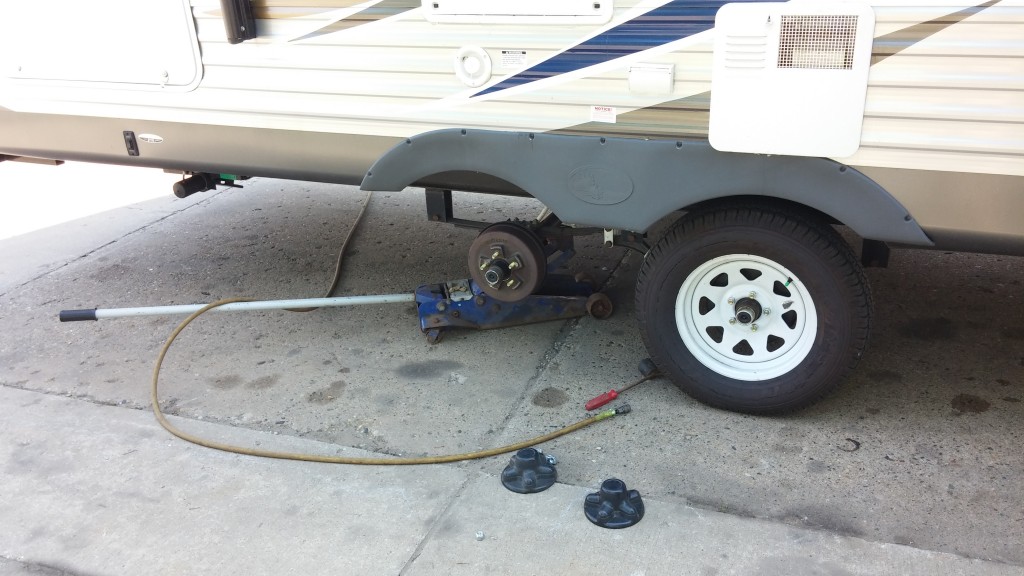 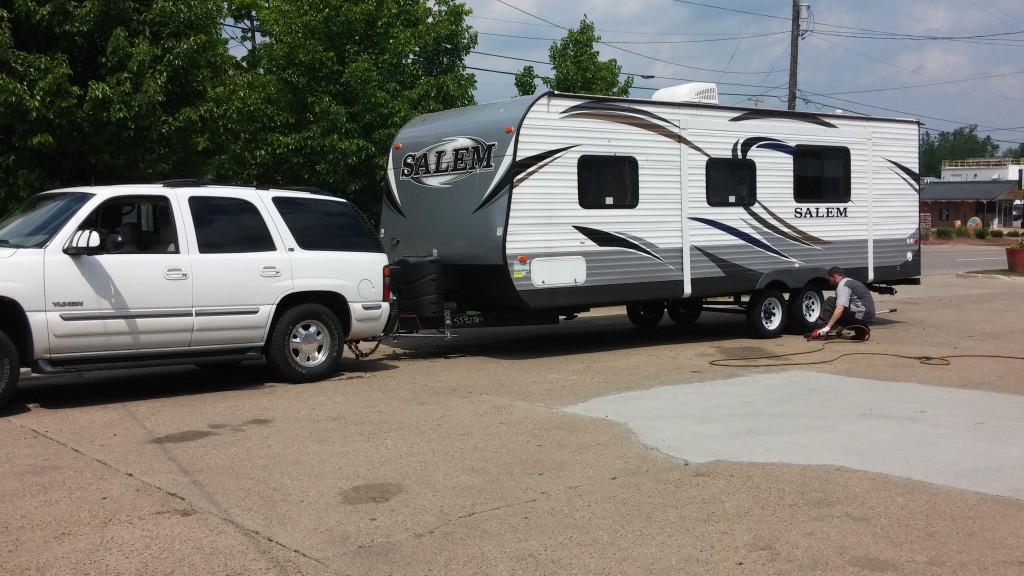 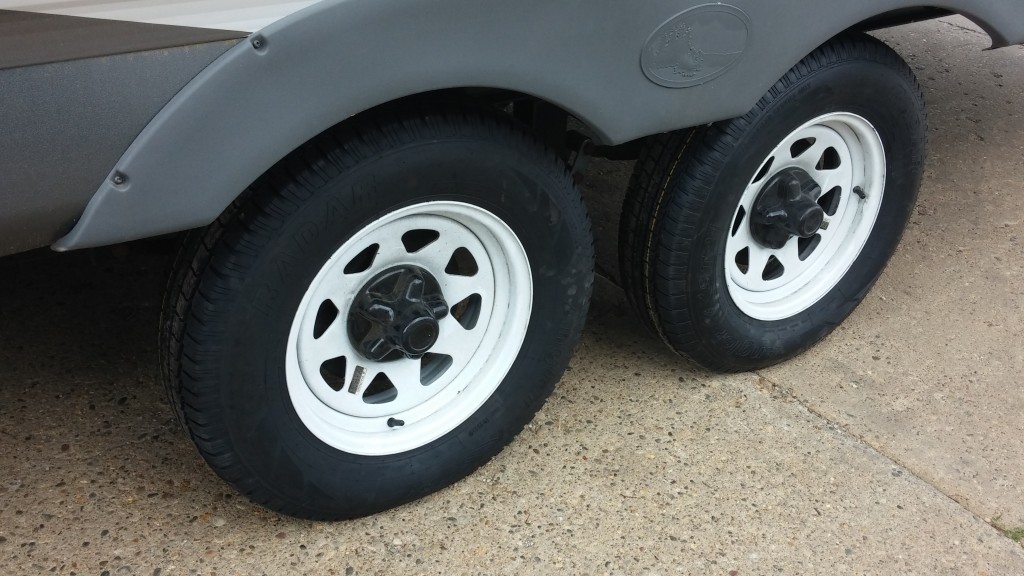 The date worked out very well, because, as it turns out, we decided the night before that we were going to stay at a local campground for a week, rather than in the very busy driveway at the house, while we all were moving out of it. It felt like running a simple errand on our way to the next destination — a very short destination — about 5.6 miles to the next campground. No hitching and unhitching necessary.

So anyway, we’ll be picking up some wheel covers and ArmorAll, and taking our spare tire along with us, too, as we travel along on our new, crack-free tires. Thanks to the great mechanics down at Ken’s!