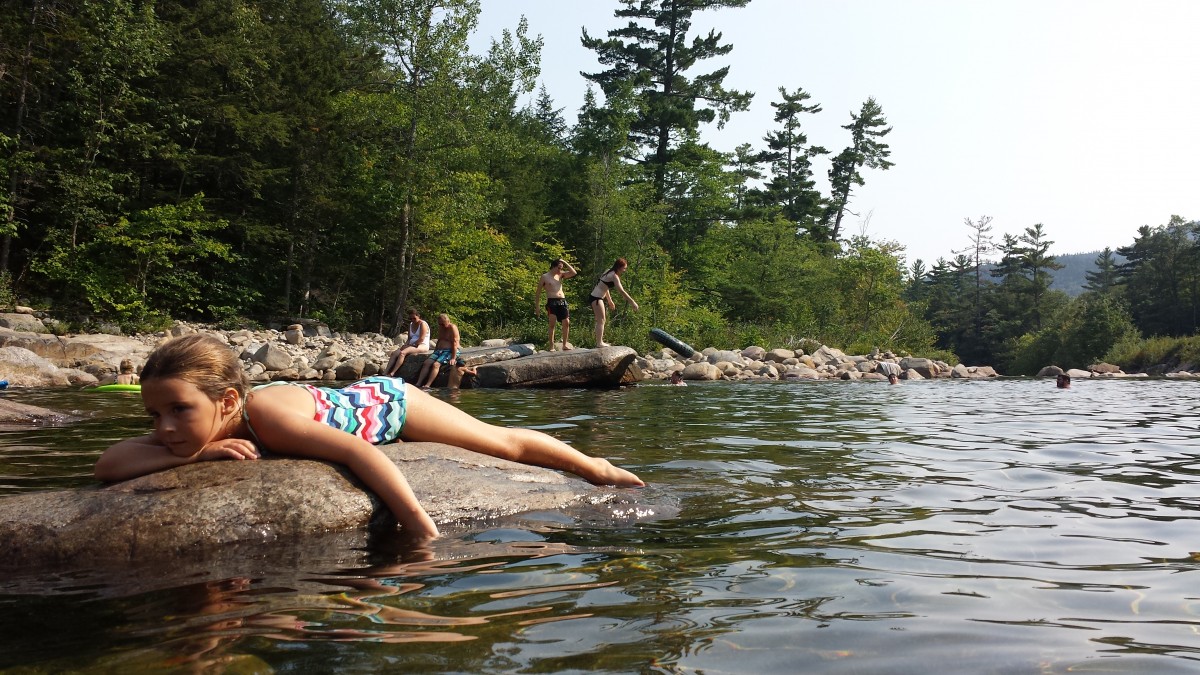 It was our new friends from Oklahoma, Mike and Patty, who told us about the Kancamagus Highway in New Hampshire. We met while camping in Sodus Point, New York, as our paths were crossing: They were heading to where we had just been in Niagara Falls, Ontario, and we were heading further into their recent territory New England. We gathered one night to swap stories and investigate road maps, taking in the lovely view of Lake Ontario from their luxurious, multi-windowed fifth wheel, sipping on local wine. “You have to take the Kancamagus Highway,” they said. Such easy-going, highly likable people, emanating vast amounts of warmth and love from their hearts. How could we say no? They knew — give yourself the gift of the Kancamagus in the White Mountain National Forest of New Hampshire and you shall receive. And so we did. And we did.

What is the Kancamagus?

The Kancamagus (Kank-ah-MAH-gus) Highway, or simply “The Kanc” or Kancamagus Scenic Byway, is a more splendorous name given to New Hampshire Route 112 that runs east to west between Bath and Conway through the White Mountain National Forest. Most of its thirty-two miles are considered a National Scenic Byway. Folks love it because it is beautiful and, well duh, scenic, especially during the fall. There also is all kinds of gorgeous camping and a plethora of things to do. (Wikipedia, KancamagusHighway.com)

Opened in 1959, the Kanc connects two formerly dead end roads between Lincoln and Conway, New Hampshire. It was named after Algonquian Chief (more appropriately sagamon, sachem or sagamore) Kancamagus, “the Fearless One,” of the Pennacook people of the Wabanaki Confederacy, the all-encompassing confederacy of the five nations of this region and their people. Kancamagus was ruler of what is now southern New Hampshire. He was the grandson of the famous and revered Passaconaway (“Child of the Bear”), “sachem of the Pennacook people of what is now northern New England,” and nephew to the Wolanacet, who was Passaconaway’s son and whom Kancamagus succeeded. After peaceful attempts at living harmoniously, his people were decimated by war and disease brought by white folks. Tired of fighting and dying, he moved them north, mostly to Quebec. His legend, as well as the legends of his famous grandfather and uncle, lives on in these woods and along this highway. There is no doubt that we felt their spirits. (Wikipedia, WMNF)

New Hampshire has many important characteristics. It is the fifth smallest state in the U.S. Most of us know that New Hampshire was among the thirteen colonies to rebel against Great Britain and that it was the first to form a government free from them, making this region fiercely independent and proud. It was a “Jacksonian stronghold.” It is known as the granite state. It has the highest percentage of “timberland area” in the country. Tourism plays a dominant roll in the state’s economy. (Wikipedia)

New Hampshire, like most of New England, experienced significant damage and loss from Hurricane Irene in August 2011. We have seen pictures and heard about it throughout our time in New England. The event is still very recent in the memories of New Englanders.

We know that New Hampshire is an important election state. Its almost instant prominence for early primaries began in 1952. Along with Iowa, New Hampshire garners half of all attention paid to the primaries in this country.

Most famously, New Hampshire is known for its state motto “Live free or die.” In 1971, it replaced the standard license plate state motto which read “Scenic.” The interesting story of the New Hampshire state motto was born from a toast written on July 31, 1809, by General John Stark, New Hampshire’s most famous soldier who fought in the American Revolution. Due to poor health, he declined “an invitation to an anniversary reunion of the Battle of Bennington” and sent a note instead, which read “Live free or die: Death is not the worst of evils.” However, it is likely that Stark was not the original author, for the phrase probably originated from “Vivre Libre ou Mourir,” “Live free or die,” popular during the French Revolution. (Wikipedia)

Nevertheless, New Hampshire is most definitely still scenic. The White Mountains are a continuation of the Appalachian Mountain chain and cover one-quarter of New Hampshire and a little bit of Maine. Home to the highest mountain in the Northeast Mt. Washington, the White Mountains are considered the most rugged in New England. Because of its central location to metropolitan areas and its rustic, natural setting, the White Mountain National Forest is a highly visited national park due to all that it offers up. (Wikipedia) We caught the drift.

This was going to be a quick trip for us. Drive through the Kanca-what is that called?, camp rustic-style, hike for a minute and then head to Maine. We didn’t have far to go: The west side of Vermont to the east side of New Hampshire is less than a two-hour drive. We could see it all and keep truckin’ for our future in seafood on the coast. But we’d heard so much about it. My sister-in-law in Vermont said, “OhmyGaaaaaawd, you haaaave to drive the Kancamagus.” Then we saw the pictures, and I kept studying the map. There was a campground called the Covered Bridge Campground with a picture of an actual covered bridge; we were going to stay there. We began realizing the majesty of White Mountain National Forest, so let’s make it two nights we thought — that’s what we’d do. Then it was off to all-you-can-eat lobster rolls in Maine.

It all became clear once we hit the Kanc: New Hamshire is even prettier than Vermont. Boulder-filled streams and rivers line the entire byway. Up, up, up you go over the high peaks and then down toward Conway. We saw so many places we wanted to stop, but we kept going so that we could figure out our camping situation.

Covered Bridge Campground is all the way on the east side of the White Mountains, part of the Saco River area in Conway. There is a road that leads to the campground just off of Route 112, but it’s easy to miss and it doesn’t support rigs higher than seven feet tall. Campers with bigger rigs must go to Conway to the use the back road, appropriately called Passaconaway Road, which turns out to be a beautiful, long, engaging and quiet drive anyway. There you will see the sign.

For twenty-two dollars a night, one can camp in the deep woods. We selected — or rather our camp host strongly suggested — site number thirty-eight, a secluded, large campsite tucked in the woods on top of a small hill at which we would camp for one night. Scot backed the rig into our site and we began to set up camp, which wasn’t much as we were off the grid, which also is the point we decided that we’d better stay for two nights. After the second night, we booked two more nights and called the White Mountains home.

We hiked — and Scot ran — the not-so easy Boulder loop trail adjacent to our campground. We rested in the hammock under the tall trees. We built early fires before the dark, dark, dark of night set in, and then roamed into the back woods to the open field behind our campsite to look at the stars. We jogged, walked and scootered our way through the meandering, well paved campground road. We slept in darkness and silence I have never known, so quiet I could hear my ears ring. We heard hoots from very large owls, following the nocturnal roaming as their calls faded and swelled. We searched for moose, but still saw none. However, they are very prevalent on the Kanc: We learned that there were eight fatalities already this year as a result of vehicles hitting a moose. Drivers beware.

Scot worked in town with some of the best 4G we’ve experienced since beginning this trip, and Luna and I swam — boy, did we all swim! — and boulder-hopped and sunbathed just up the road at the Lower Falls Scenic Area, home to the Swift River’s super cold, super clear water. It was some of the most exhilarating swimming we’ve ever experienced. Surrounded by rocks and boulders big and small, cascading water, the beautiful mountains and pines and all varieties of people, we visited three times, until I could take no more — not just because we needed to gear up for Maine, but also because, well, my fingertips were becoming numb. But it was so much fun.

The only downside to our rustic camping experience in the White Mountains was that we had no form of communication whatsoever with Scot while he was working in town — no cell, no text, no flares or signal fires. Without electricity, we keep our devices off at the campground — any campground without hookups — in order to conserve battery life. Normally, that’s fine, because we like to be off the grid; we use candles and water from our storage tank and we are nearby one another. However, by late morning when Scot was away, we found the lack of communication to be bothersome and frustrating. We have Walkie Talkies that we will try to use. Otherwise, we don’t have a real solution to that yet except to limit our rustic experiences to when we are mostly all together. 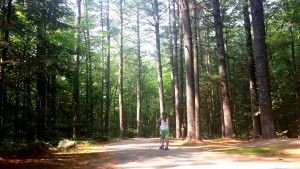 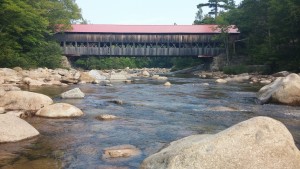 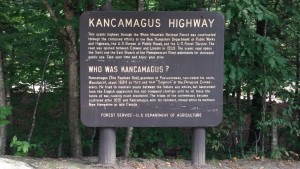 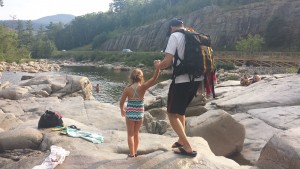 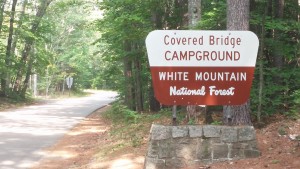 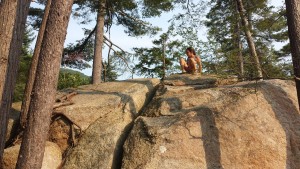 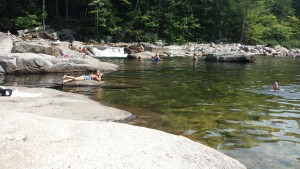 My Basking Sunbather Warming in on the Hot Rock. 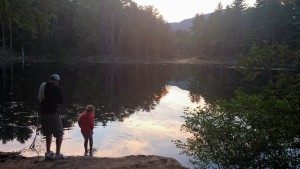 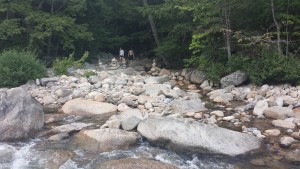 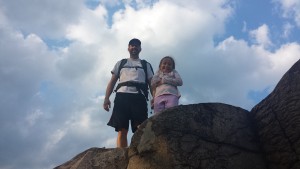 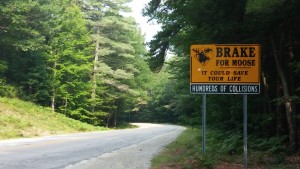 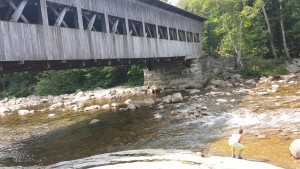 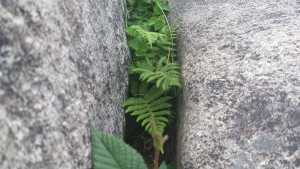 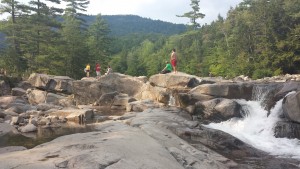 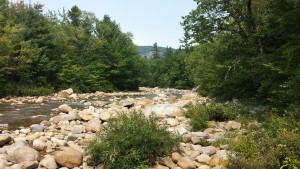 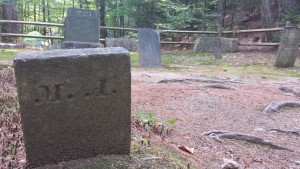 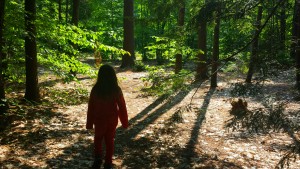 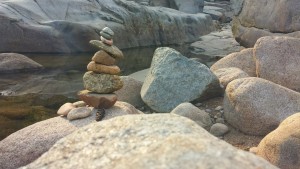 Our experience in the White Mountains was simply refreshing and invigorating. It’s funny what begins to happen to one’s brain when every sound is turned off, every normal or general or unknown stimulation, whether from outside or within, is extinguished — there is uncharted territory. In a way, it is like meditation in that we tune out in order to tune in; we go to it, and it is already there. When nature provides a setting that removes certain senses often taken for granted, we move into a place that always exists, that constantly exists, if we are open to meeting it, to entering it, to engaging with it. The heart opens, breathing is larger, everything is wide awake and vast and generous. It makes room — lots of room — for the soul to speak.

If you travel to New England, drive along the Kancamagus Highway. Spirit is calling. You will find your way.