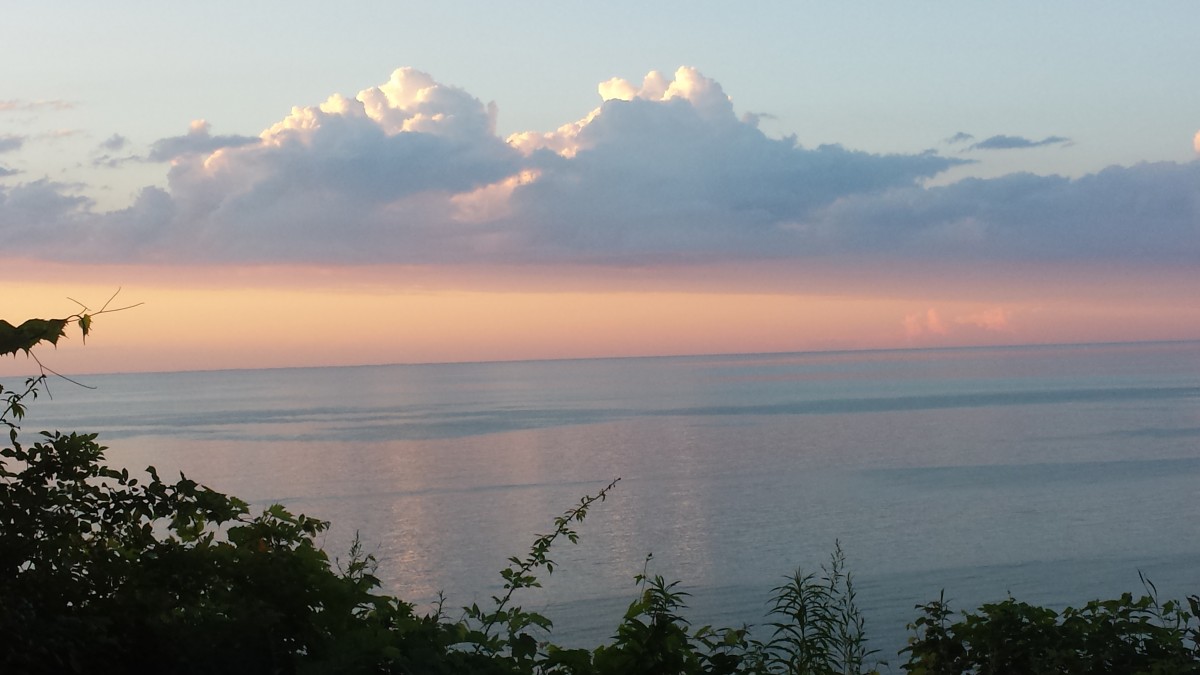 We have written in detail about many of our destinations so far. We also wrote our first “cheater” post, to quote my friend Jim, by combining a few campgrounds/destinations as we teleported through Niagara Falls east. Now on the other side of the portal, we have been spending time on Lake Ontario, and we have driven around just about half of it. To our surprise, it’s kind of quiet around here, and peaceful. Quite naturally, Lake Ontario speaks volumes in light and in winds, in waves and from the horizon, in rolling hills and vineyards and orchards, in passing rain clouds, from sunset to sunrise, west to east. It made us relax and rest and breathe deeply. It was a soft landing after plowing KOA-style through northern Michigan and southern Ontario. Lake Ontario — the Iroquois’ “beautiful great lake” — and its landscape are subtly powerful and grounding.

Lake Ontario was the fifth and final lake on our Great Lakes tour. Scot and I arrived with anticipation as we had never visited it previously. Nor did we imagine how restful it would be. Immediately we were taken aback by its vastness, which seemed even larger than Lake Michigan, which it is not. Perhaps it was just an illusion this west-east (or east-west) expansiveness having  grown up in the long state of Michigan and its surrounding lengthy waters. Even so, we were moved by this glacial gift of beauty and serenity.

Lake Ontario is windy and sailing is common. Fishing is common, too, but only for sport or recreation. Lake Ontario was overfished and poisoned long ago, and the industry and its respective bustling died along with it, making for sleepy towns and villages all along the lake. But the wind — an almost constant wind — helped to create other industries, specifically made up of vineyards, orchards and farms. Lake Ontario is the only Great Lake that does not share Michigan’s shoreline, but its coastline certainly matches that of West Michigan. White wines, fruit farms, farm stands, artists’ lairs, cozy inns and recreational mariners make it a Lake Michigan sibling. The wind also creates natural barriers, wetlands and lagoons, which offer up ideal settings for city establishments, such as Toronto, as well as havens for migratory birds and thriving ecosystems. (Wikipedia)

Although the smallest Great Lake, Lake Ontario has more volume than Lake Erie. Fed by the Niagara River, which drains Lake Erie, the waters of Lake Ontario find their way out to sea via the St. Lawrence River. The volume of Lake Ontario and its seaward destination have an interesting history. When the Wisconsin ice sheet, which carved out and filled the Great Lakes, tore through ancient Ontario, it left a unique drainage system made up of natural geologic landforms along its path. As the glacier retreated, it yielded to these landforms, which slowed the glacier and dammed its natural outlet, the St. Lawrence valley, filling it to above sea level. When finally the ice melted, the outlet fell below sea level, creating a temporary bay of the Atlantic Ocean. Eventually, the land recovered from the pressure of glacial ice and is still bouncing back today at “about 12 inches per century in the St. Lawrence area.” This rapid rebound forces the Lake Ontario lake bed to tilt southward ever so gently, which makes bays out of river valleys and is the culprit of the constantly eroding southern shores of the lake. (Wikipedia)

This also might explain why we were so captivated by Lake Ontario: It is active geologically and it shows. Constant weathering bangs up the shoreline persistently, but is not overpowering. The lack of fast-paced communities complemented this scene. In fact, the crazed nature of our previous stops in Petoskey, Port Huron and Niagara Falls put us on edge, so we knew that we needed to get to the other side as quickly as possible, somewhere east of Rochester, New York, but not too far east that we would overextend ourselves on the drive. Our spotty internet connection didn’t give us much time to open maps or web browsers to find our next campsite, but we were headed out on a Saturday and wanted a place to park the rig. One little map pin opened up for us just long enough to find a campground website and contact the manager through email. We awakened the next morning to learn that the South Shore RV Park in Sodus Point, New York, had a nice little spot for us to get to know Lake Ontario and Upstate New York. 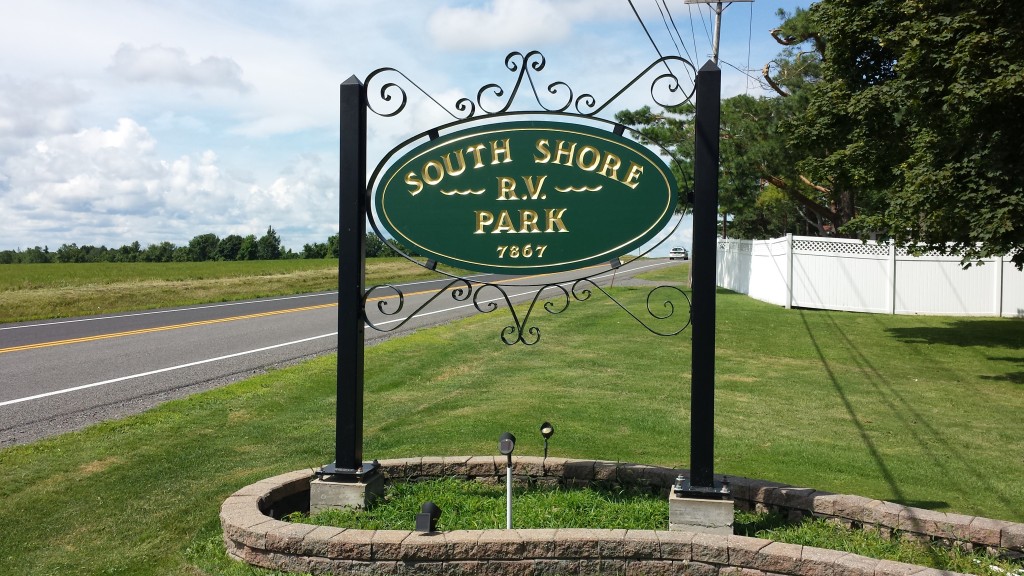 They had us at Carol. Well, they had us with a photo of Carol, one half of the managing couple at South Shore RV Park in Sodus Point. Bruce is the other half, and the two of them made us feel welcome and like family.

The South Shore RV Park sits on a bluff on Lake Ontario. It slopes from start to finish. We claimed the reserved campsite for that Saturday night, but Carol was eager for us to see the lakeside campsite that would be available for the following four nights. We wanted to unhitch and unwind, then we would go visit the other campsite and consider whether or not we would stay. At our skinny little first slip, Scot and I received our first lesson in camper cantilevering.

The right side of the WordCamper slanted heavily downward, requiring that we lift it as high as it would go, which further required almost all of our blocks and that Scot use both feet to brake and press the gas as we inched upward on the tri-level lift. Once atop the blocks, Scot put the truck in park in order to unhitch it. However, the sagging back end of the truck and the pressure from the hoisted rig squeezed the ball of the hitch into the tongue of the camper, but it wouldn’t release whether we raised the tongue jack or lowered it. So Scot moved the truck forward about one quarter inch, while I spotted with another camping neighbor. As he ever-so-slightly moved the truck forward, it moved the supporting blocks of the tongue jack forward with it, scooting incrementally like a newbie on ice skates. For a moment I was not sure what was going to happen — think lurching, lunging, crushing or cracking. Thankfully, nothing else suspenseful ensued and we were able to free the truck from the trailer. Nevertheless, I slept a bit anxiously and dreamed of wheels slipping off of supports. YIkes!

But, of course, there were no other cliffhangers (pun intended), and, after unhitching, we visited our next potential site. Oh, goodness, we laughed out loud at what we encountered — a lakeside campsite atop the bluff with a massive view. As Luna would say, the decision to move to the new site the next day was “easy-peasy lemon squeezy.” So we did and it was lovely. The breeze, the lake view, the trees, the eagles, the sailboats, the storms, the clouds, the sunsets and our neighbors made our extended stay purely blissful. Scot and I took turns napping in the hammock, while Luna relaxed on her own. For the first few days we took in the air and vista with hands on hips above the water. We felt refreshed and alive and well.

Soon afterward, I ventured to bountiful Burnap’s farm stand in neighboring Sodus, and later all three of us went to the village of Sodus Point. Sodus Point was once the territory of the Onondaga people, one of the five nations of the Iroquois. By 1794, the village of Sodus Point had been settled by European-Americans, but it was burned to the ground by the British during the War of 1812. After rebuilding, Sodus Point, like many lakeside communities in the Great Lakes, became an important shipping center. However, Sodus Point was not included in the plans for the Erie Canal and declined in importance. Nowadays, its a sleepy and fun vacation destination. We enjoyed our ’round-the-town romp.

We also visited the Chimney Bluffs State Park for a hike above the water and a view of drumlins — weathered clay spires left over from glacial movement. We were weathered, too, from the ever-present wind, but it was a fun hike nevertheless.

And, of course, we visited the local farm market. There were lots of people present for this very active farm market in Sodus, a surprisingly diverse crowd of shoppers and vendors alike. We enjoyed being immersed in mixed company after experiencing mostly homogeneous communities for quite some time.

It’s probably pretty clear that we really enjoyed our time at South Shore RV Park and in Sodus and Sodus Point. We felt relaxed and at home there. I believe that many Michiganders will find its landscape familiar and feel as we do about this part of Upstate New York. And if touring Great Lakes or wineries is your thing, this is definitely a route you should take. If you’re camping this way, call Carol. She and Bruce will take great care of you.

What We Have Learned

We’re really getting to know our rig.

Other campers are very generous with their time, tips and tools. Thanks again to those who have helped along the way.

We continue to meet amazing people. For that, we are grateful.

Keep the freshwater tank clean and ready for use on the road. It comes in handy while traveling with a built-in toilet behind you.

We’ll come back to this and update it later. Scot is building a template to track receipts that will calculate the cost at each destination, which will roll into a overall total of this adventure. Until then, the receipts are piling up, and we’d rather go swimming. 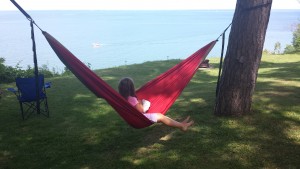 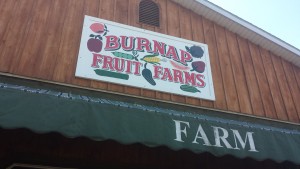 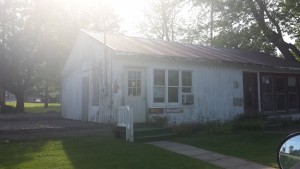 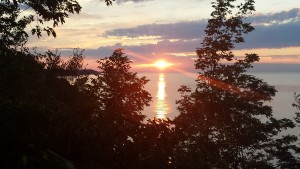 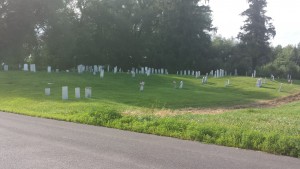 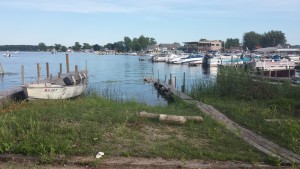 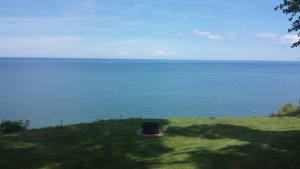 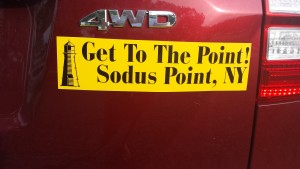 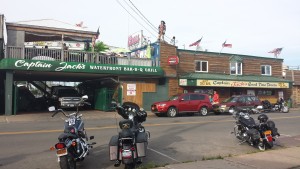 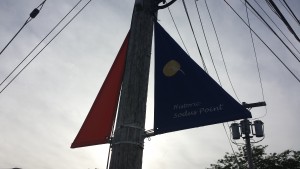 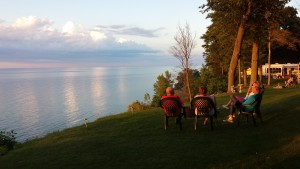 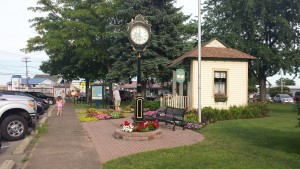 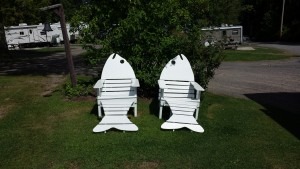 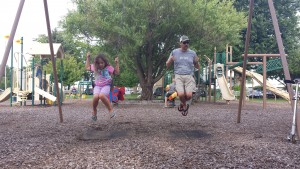 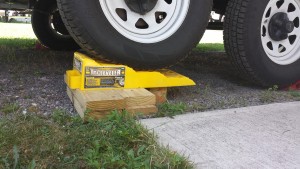