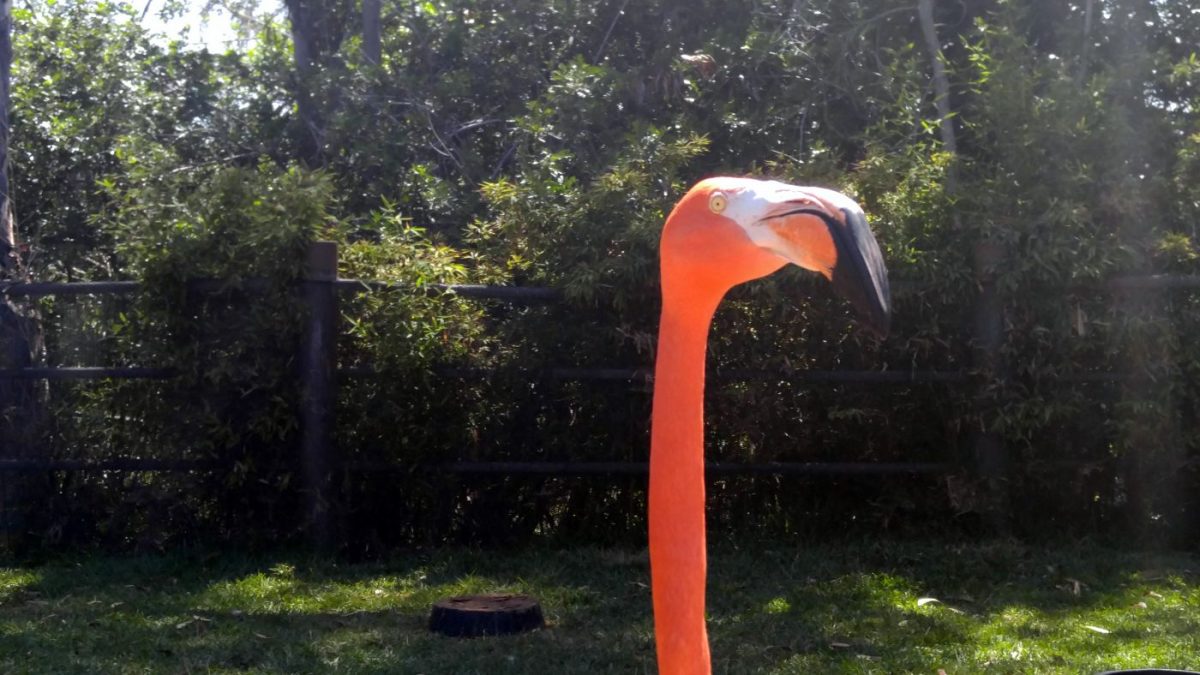 Our visit to the San Diego Zoo was always part of our full time travel itinerary, because it maintains a special place in our hearts.

When I was pregnant with our daughter, some good friends gifted to us a “babymoon,” a little holiday stay in their Coronado Island bungalow to honor our last little while as a couple, and also to celebrate our life to come as a family. It was January, and six weeks remained in my pregnancy. We hopped a plane from Phoenix to San Diego and cabbed it to the island. Their tall and narrow bungalow, framed by giant palm fronds, fit snugly on its small parcel of land among the many other bungalows and homes that are packed onto Coronado. I hobbled my way around our temporary digs, up the stairs to the bedroom and up even more stairs to the rooftop deck. There we spent many evenings watching the sun go down or observing the various aircraft that passed to and from the North Island Naval Air Station. We walked to Orange Avenue for food, as well as to Coronado Beach and the Hotel Del Mar for meandering. We talked a lot, and we adopted Jason Mraz’s We Sing. We Dance. We Steal Things. as our babymoon soundtrack. We narrowed down the names we might choose for the girl we were about to have, including the name she would receive, which was heavily influenced by the book Buenas Noches, Luna, as well as by the fullest full moon of the year in 2009, which happened to coincide with our trip.

And, of course, we went to the zoo.

Back then, it was my second trip to the San Diego Zoo and it was Scot’s first. January is a great time to visit the zoo, because the visitors are fewer and the temperatures are lower, so we kind of had the place to ourselves. We immediately took the gondola to the far end of the park and Scot helped me hobble my way around the zoo. With the exception of my feet aching, I don’t recall struggling at all with my very full belly. In fact, it was a dreamy experience for us both, adding to what I considered to be an incredibly romantic pregnancy.

Fast forward seven-plus years and we returned to the San Diego Zoo at a time when Luna could form memories of her own about this place. After packing lunch and snacks and clothing for cooler temps, we set out for an afternoon-until-evening adventure to take in one of the most amazing zoos in the world. Summertime at the San Diego Zoo meant that it was busier than ever, but it was better and even more fun than ever, too. With kiddo in tow, we made our way through the park from noon until closing, and we had the time of our lives. 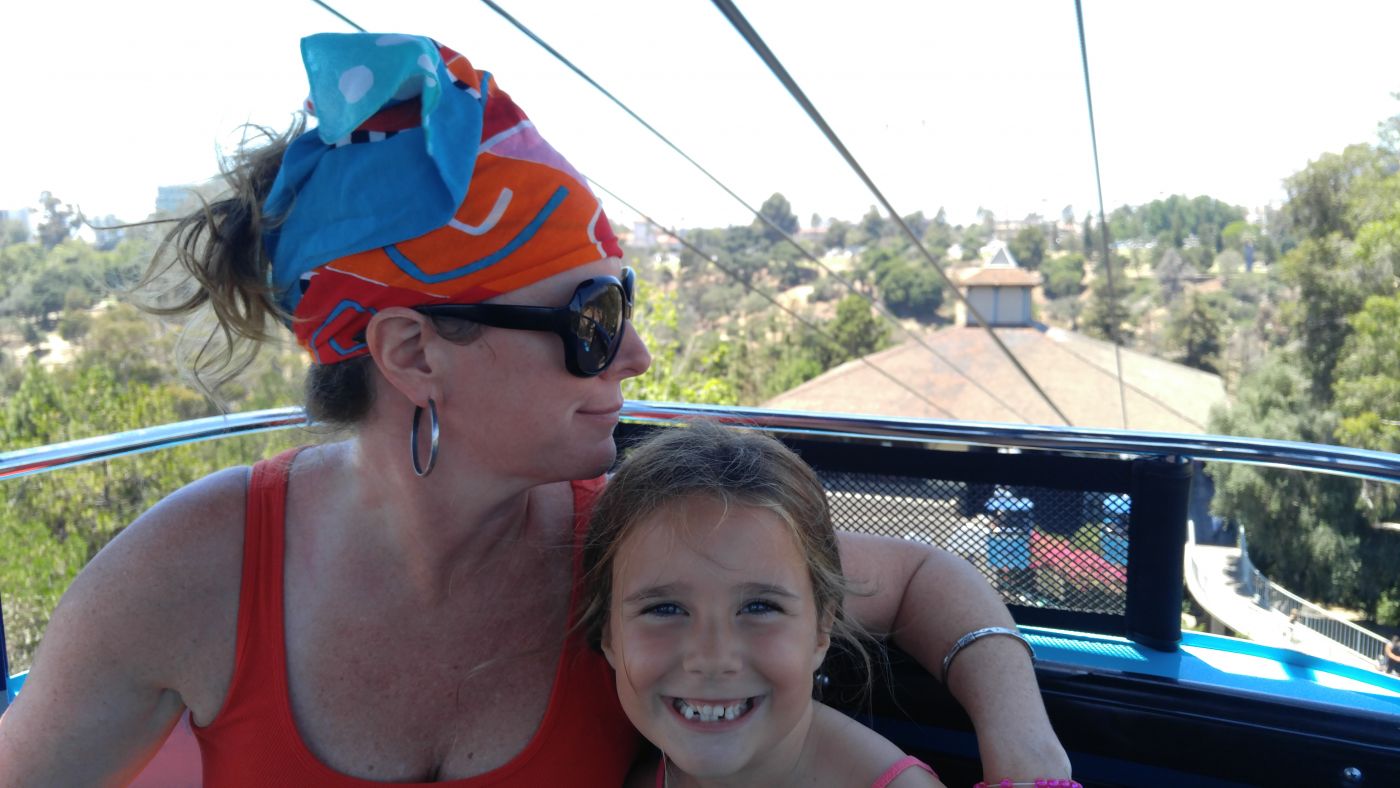 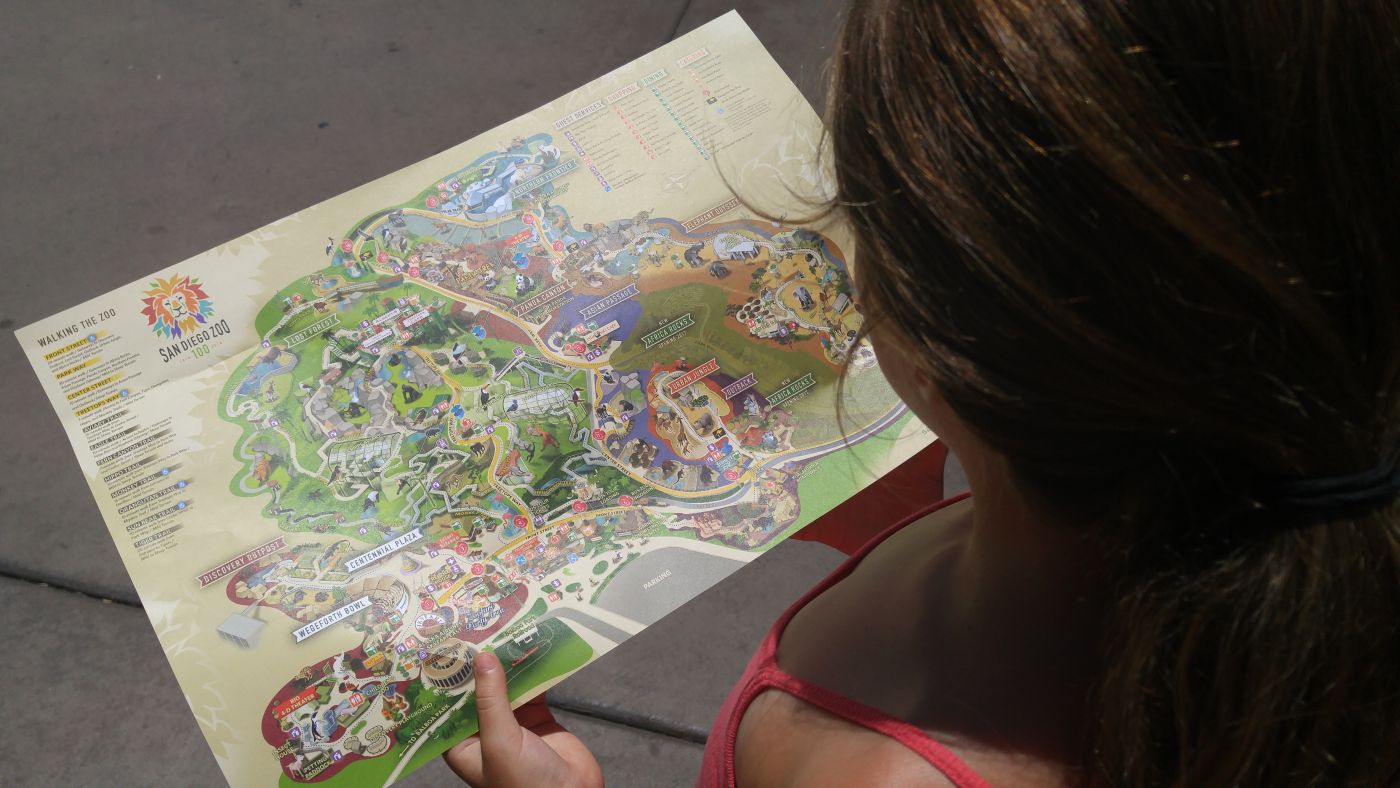 Spread over 100 acres in beautiful Balboa Park, San Diego Zoo Global — the parent company of the San Diego Zoo — “is one of the largest zoological membership associations in the world, with more than 250,000 member households and 130,000 child memberships, representing more than a half million people.” (Wikipedia) As we made our way through the zoo this summer day, we could feel it: The San Diego Zoo is a big deal and it seems to put its money where its mouth is. The zoo takes its members seriously, as well as the plethora of national and international non-member visitors it sees every year. One could visit for days and not see everything, nor taste everything, nor experience everything. Gondolas and buses can take you here or there should your feet ache or if you prefer to see the park from a different view. Food stalls of all varieties and cultures satiate the hungry visitor. Nature lovers can take in the abundant flora of this park. And, of course, animal lovers can visit beloved creatures that they likely would never see in a lifetime. We began our visit with Luna as we did almost eight years ago, with a ride on the Skyfari gondola to the end of the park to visit the polar bears. The fun was just about to start. 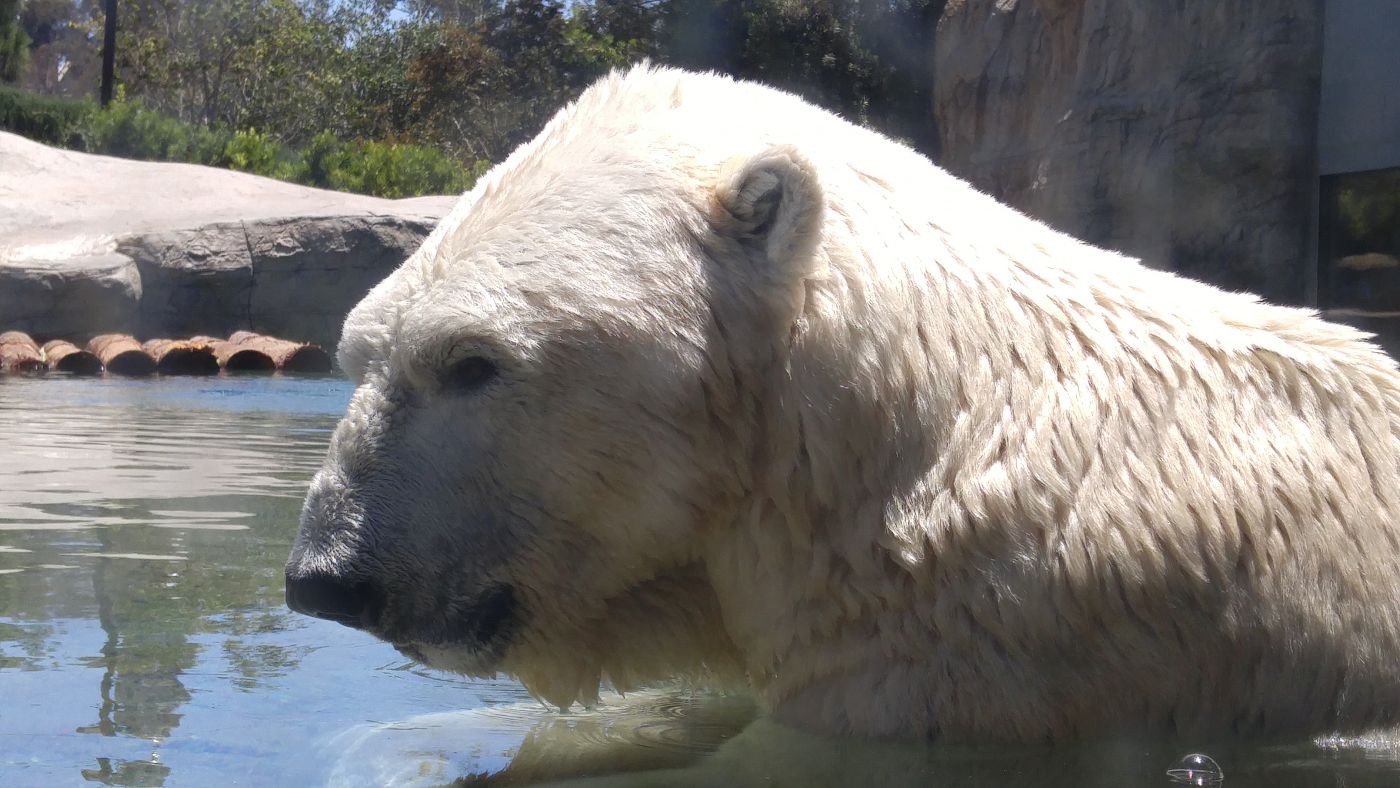 The San Diego Zoo was born from exotic animal exhibitions that were part of the Panama-California Exposition in 1915, a celebration of the opening of the Panama Canal held in Balboa Park. After two years, the Exposition ceased to continue, and the animals were abandoned. In 1916, Henry M. Wegeforth founded the San Diego Zoological Society. The city of San Diego claimed the homeless animals, and it was decided that the new Zoological Society would care for them. By 1921, land was set aside for the zoo in Balboa Park. Later, the San Diego Zoological Society took on more animals from another failed amusement park. Eventually, the zoo became a pay-to-enter zoo with the help of a California favorite lady, philanthropist Ellen Browning Scripps, who financed a fence to surround the park. (Wikipedia)

The San Diego Zoo is know as a trailblazer of open-air, cageless exhibits that closely match as much as possible the animals’ natural habitats, including grouping animals that may be found side-by-side in nature and “native plant life.” Therefore, as one roams the park, one will encounter an African rain forest that includes gorillas; an Arctic taiga and tundra, home to polar bears, reindeer and fox; many aviaries; an Asian “passage,” to visit pandas and much more. In fact, this zoo cares for “over 3,700 animals of more than 650 species and subspecies.” (Wikipedia) The abundance of animals and all that there is to know about them is dizzying … and a privilege. Despite ongoing controversies about zoos and their roles, we believe that they serve an important purpose — that is, to care for animals and educate us all about how to better protect our animal friends. 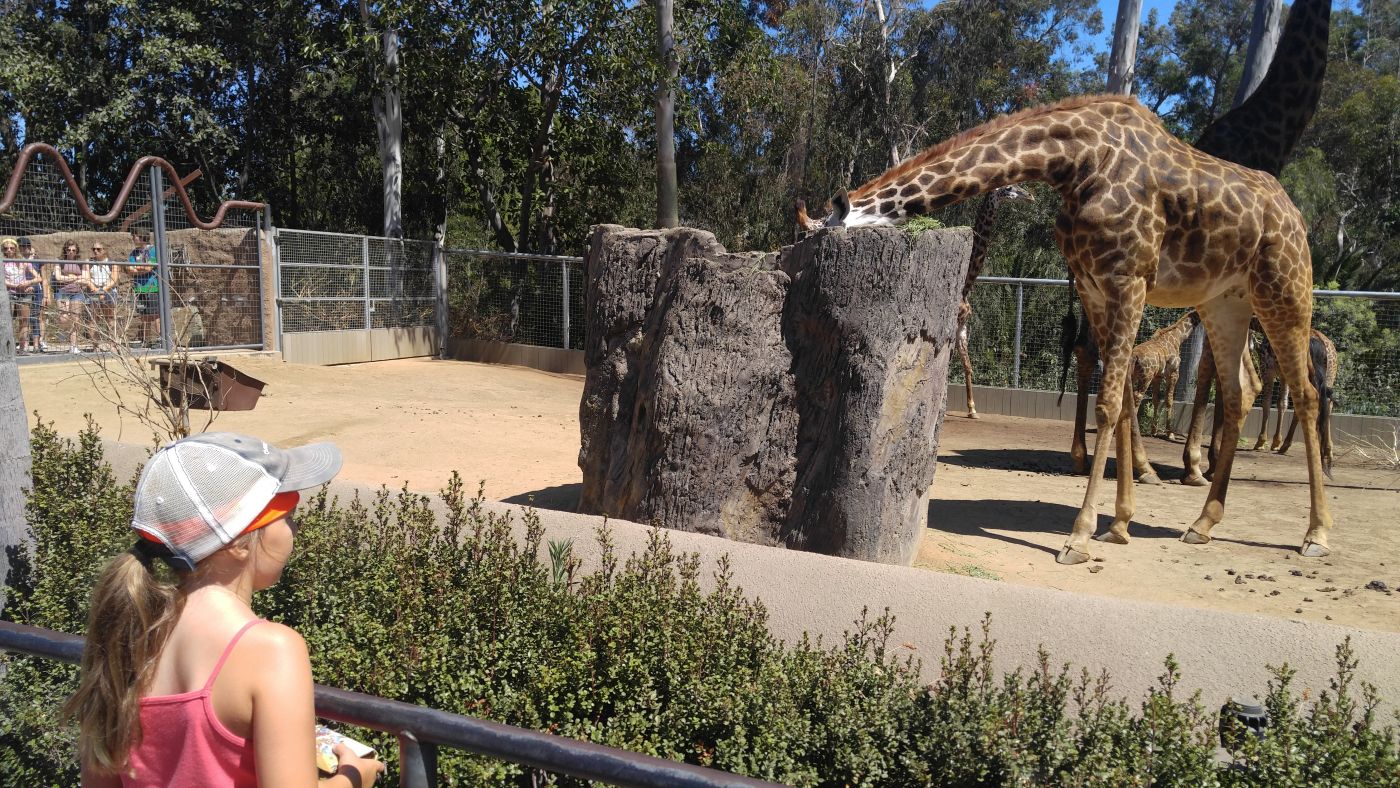 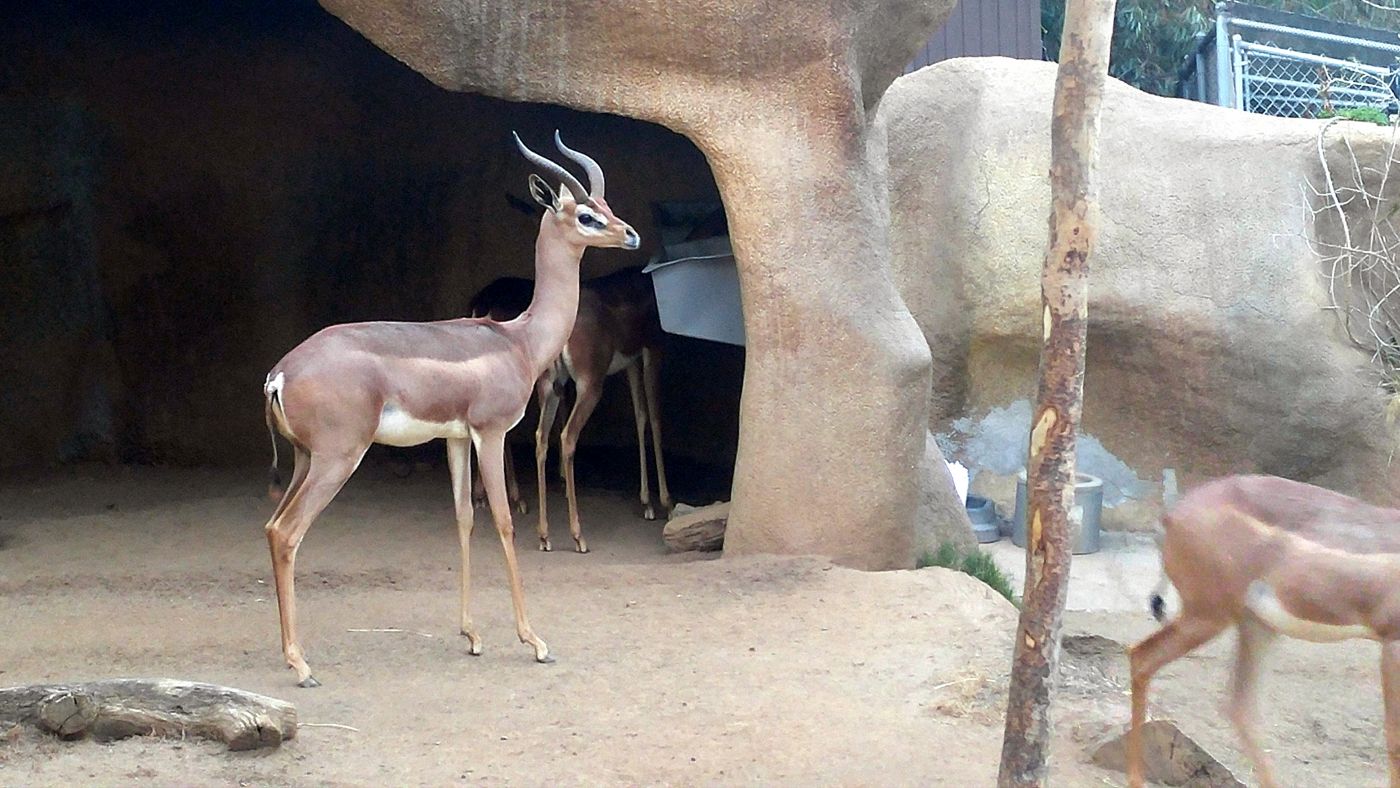 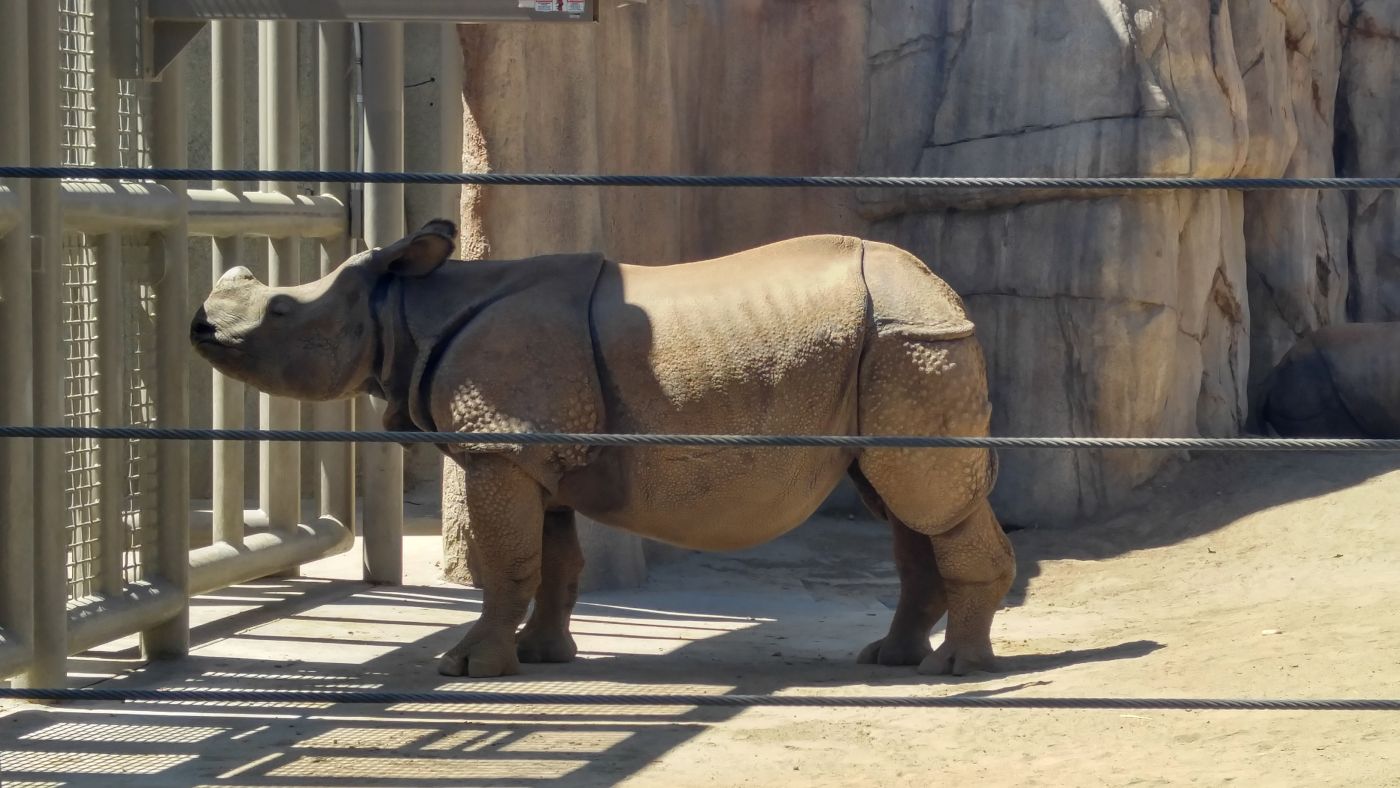 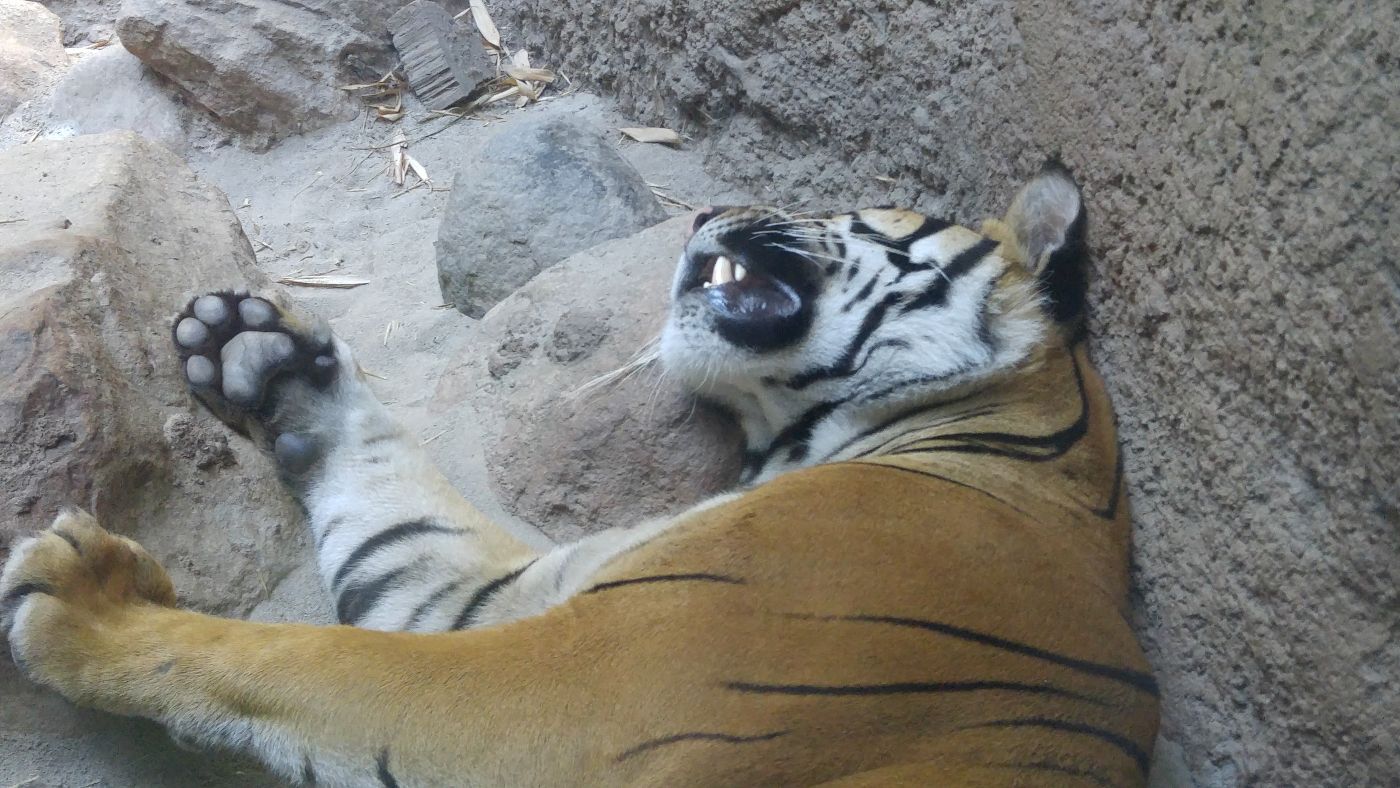 In fact, the San Diego Zoo actively participates in “conservation and species-preservation efforts.” At its Institute for Conservation Research, it “raises California condors, giant pandas, tigers, African black rhinos, and 145 other endangered species.” The zoo has reintroduced over “30 endangered species back into the wild, and has conserved habitat at 50 field sites. They also have over 200 conservation scientists working in 35 countries around the world … [and] it employs … professional geneticists, cytologists, and veterinarians and maintains a cryopreservation facility for rare sperm and eggs called the frozen zoo.” (Wikipedia)

The San Diego Zoo also is one of only four zoos in the world that keeps and successfully breeds the giant panda. The giant pandas are on loan, so the zoo does not own the panda babies; cubs are returned to China via its sister program to reintroduce them into the wild. The pandas are a very special part of the San Diego Zoo. One of the best times to visit them is later in the evening after the crowds are gone. At that time, the air is cool and the pandas are lounging, sleeping or eating in the peace and quiet. 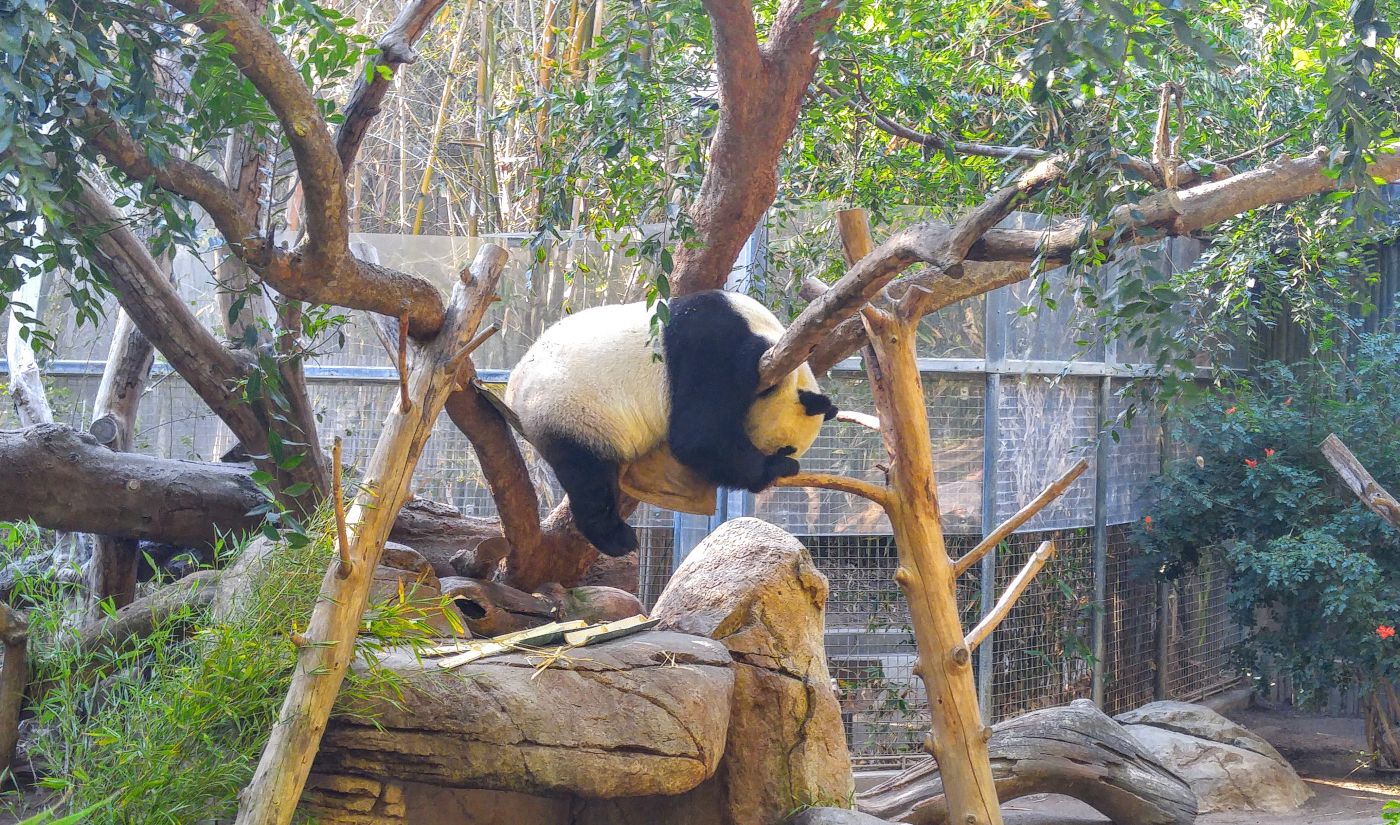 The famously temperate and sunny Southern California climate is well suited to host and maintain plants and animals of all sorts. The San Diego Zoo contains a myriad of birds, reptiles, and mammals; an arboretum housing a rare plant collection; over 700,000 exotic plants on premises, including some rare animal foods that are raised on site, such as 40 varieties of bamboo for the pandas and 18 varieties of eucalyptus trees for the koalas. Besides the rare pandas, the San Diego Zoo is home to the largest number of koalas outside of Australia. 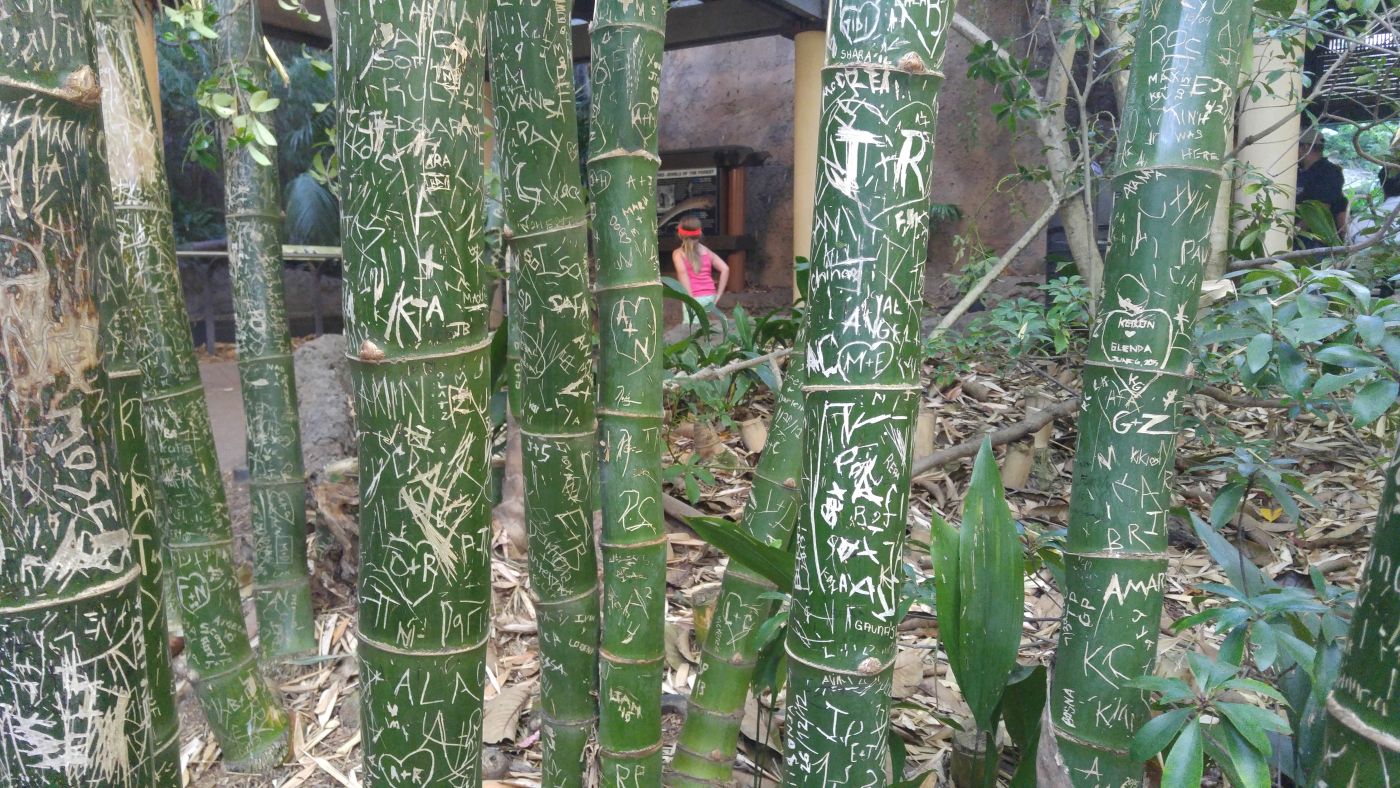 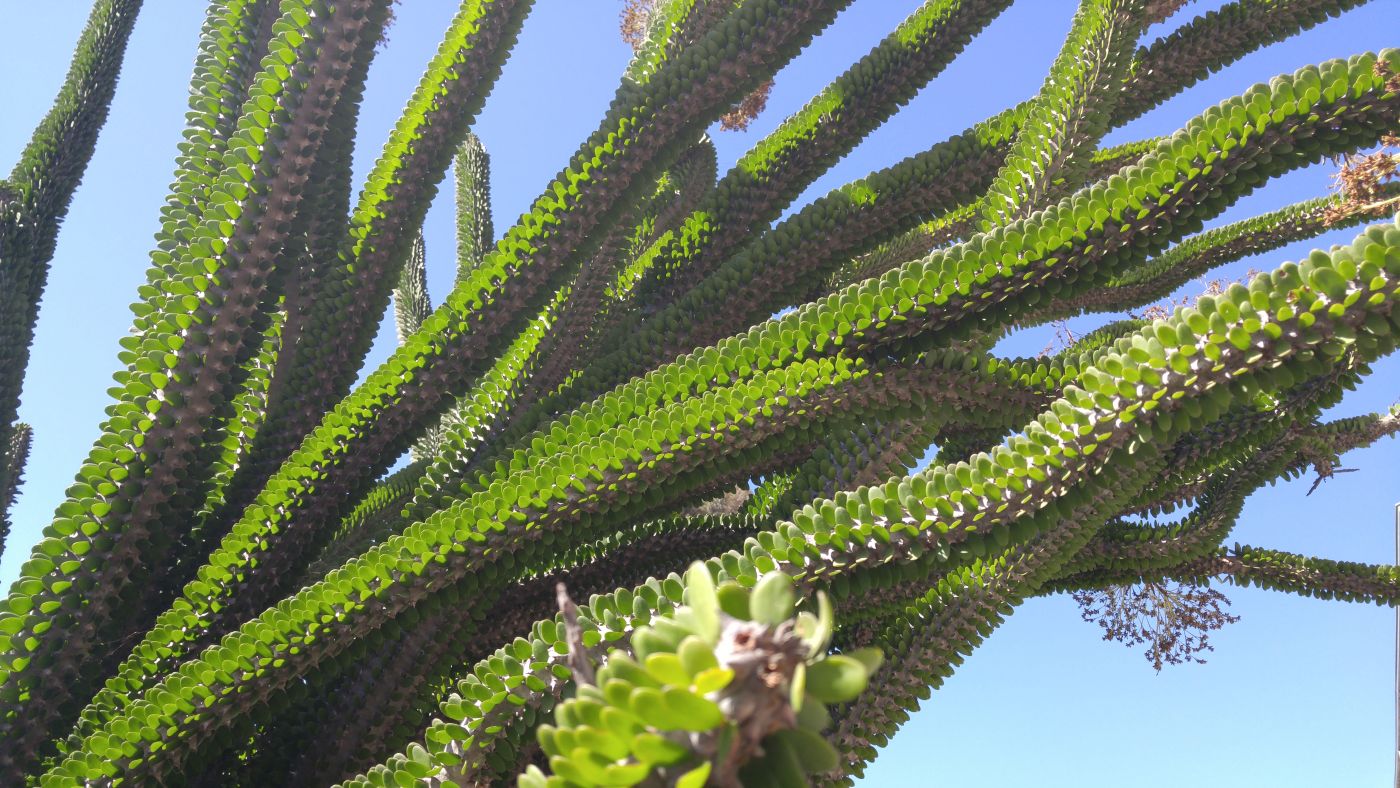 But that’s not all. One of our favorite favorite animals was the hippo. We spent a lot of time with the hippo after the crowds dispersed, and it was a highlight of the trip. 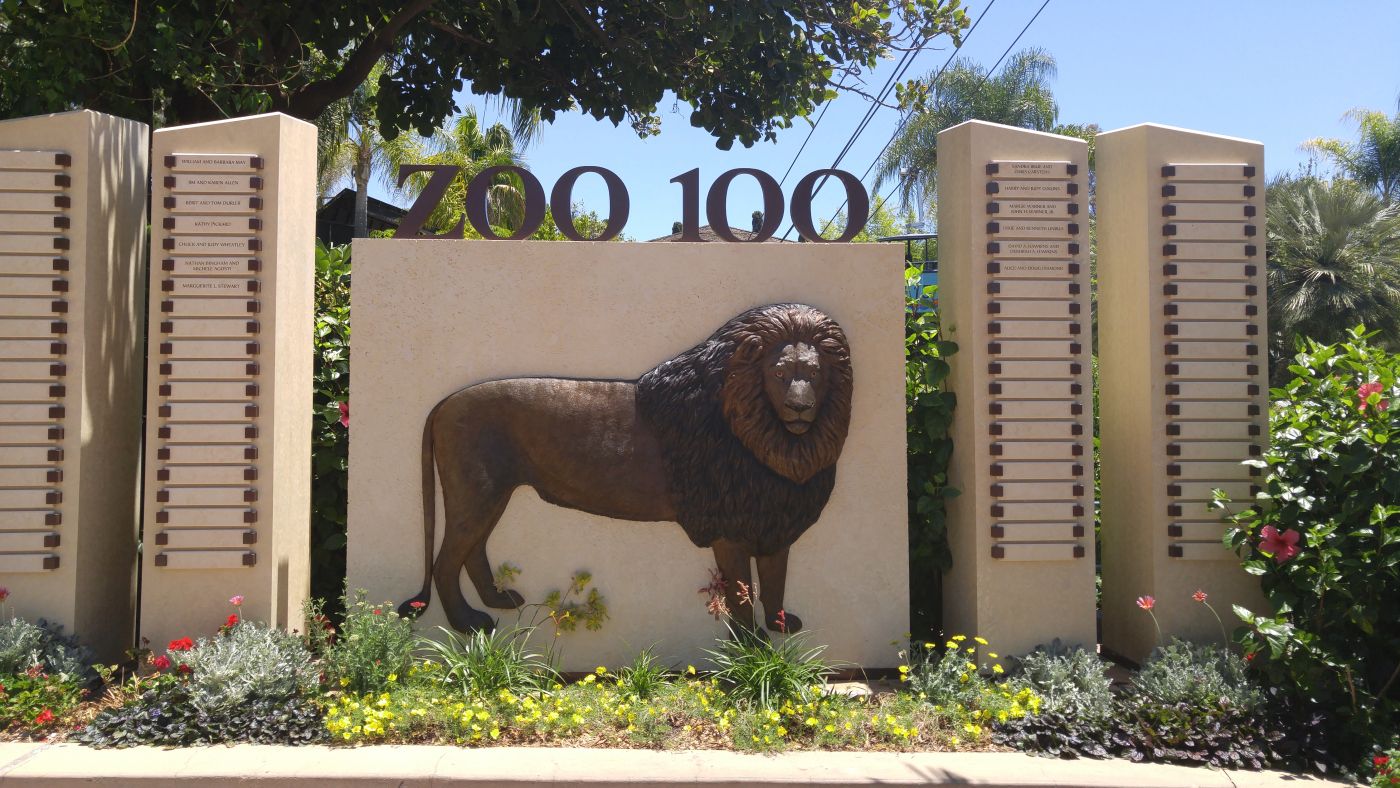 Coincidentally, the San Diego Zoo is celebrating its centennial this year, so there are many planned events, including music, tons of fun for kids and a parade. We could hear the music as we neared the entrance. We were having such a good time, so we decided to stay, have dinner and cocktails, and then head back on the gondola to see the animals as they come out for the cooler night air.

That might have been the best decision of the day, for the evening gondola ride was spectacular. The whole city was illuminated. Planes came in close to their downtown landing pad. We could see the domes of the museums at Balboa. The air smelled good and we were happy. We visited the animals one last time and took one last gondola ride to the front of the park. We had forgotten about the parade. Yet more music floated through the air as we descended, and a spectacular array of giant puppets grabbed our attention. We hustled off the gondola for a front row view of this most beautiful parade, capping off an utterly enchanting day. 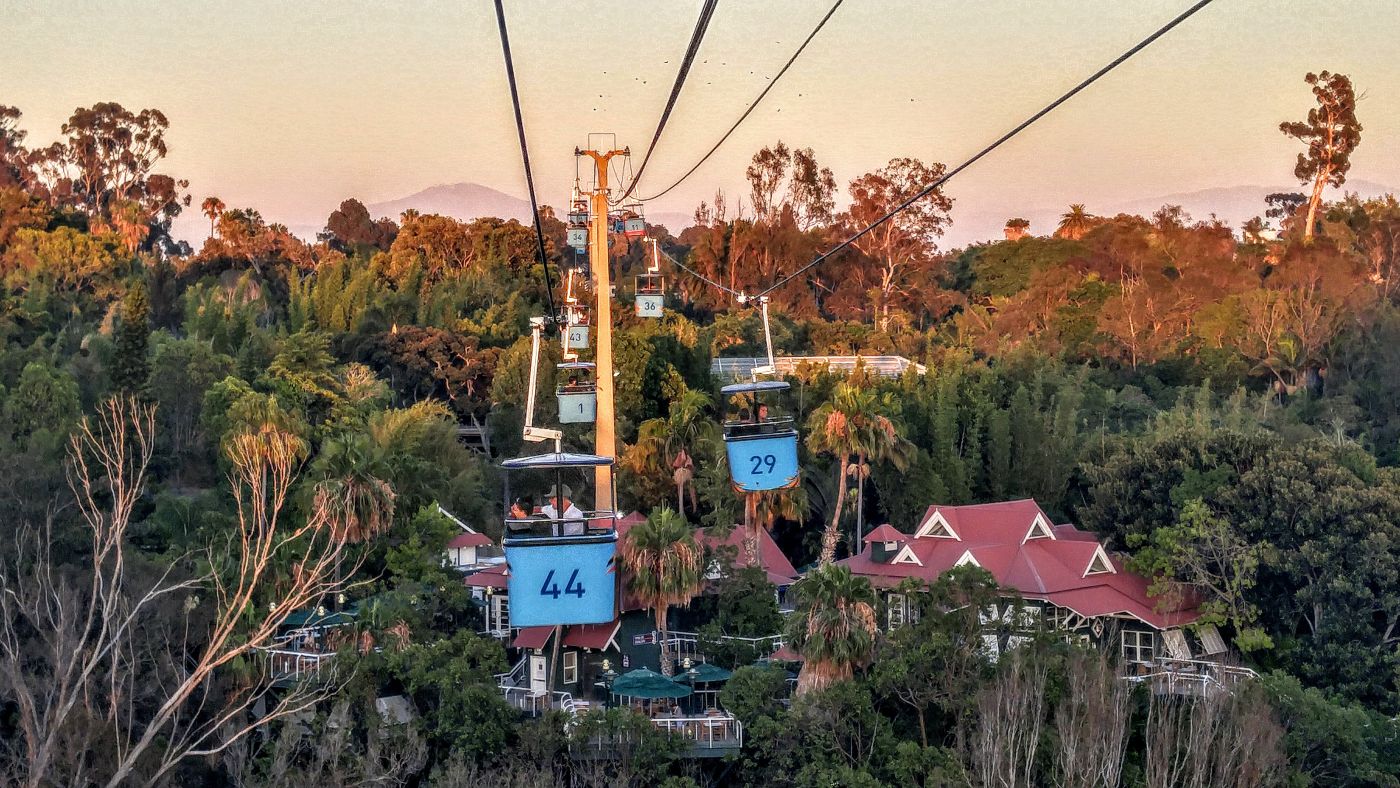 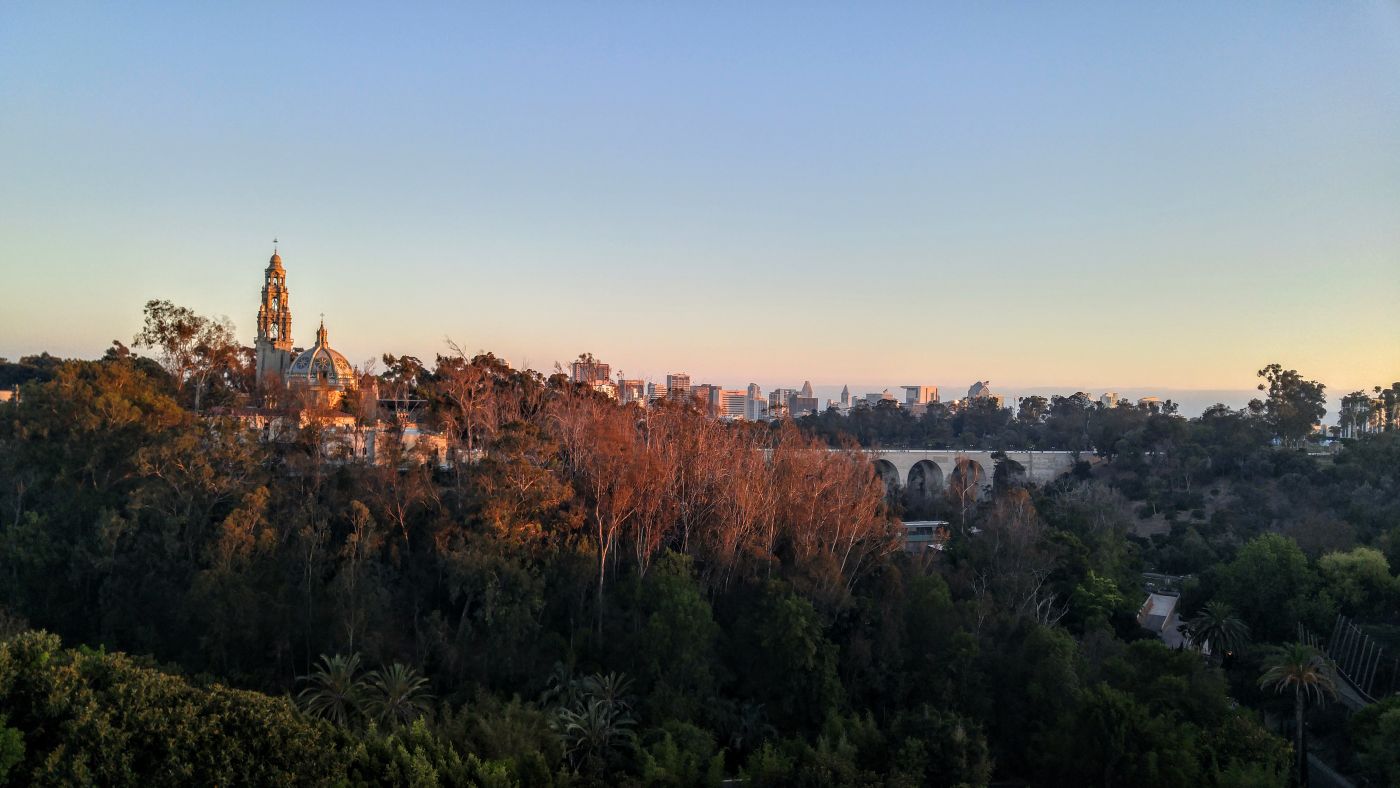 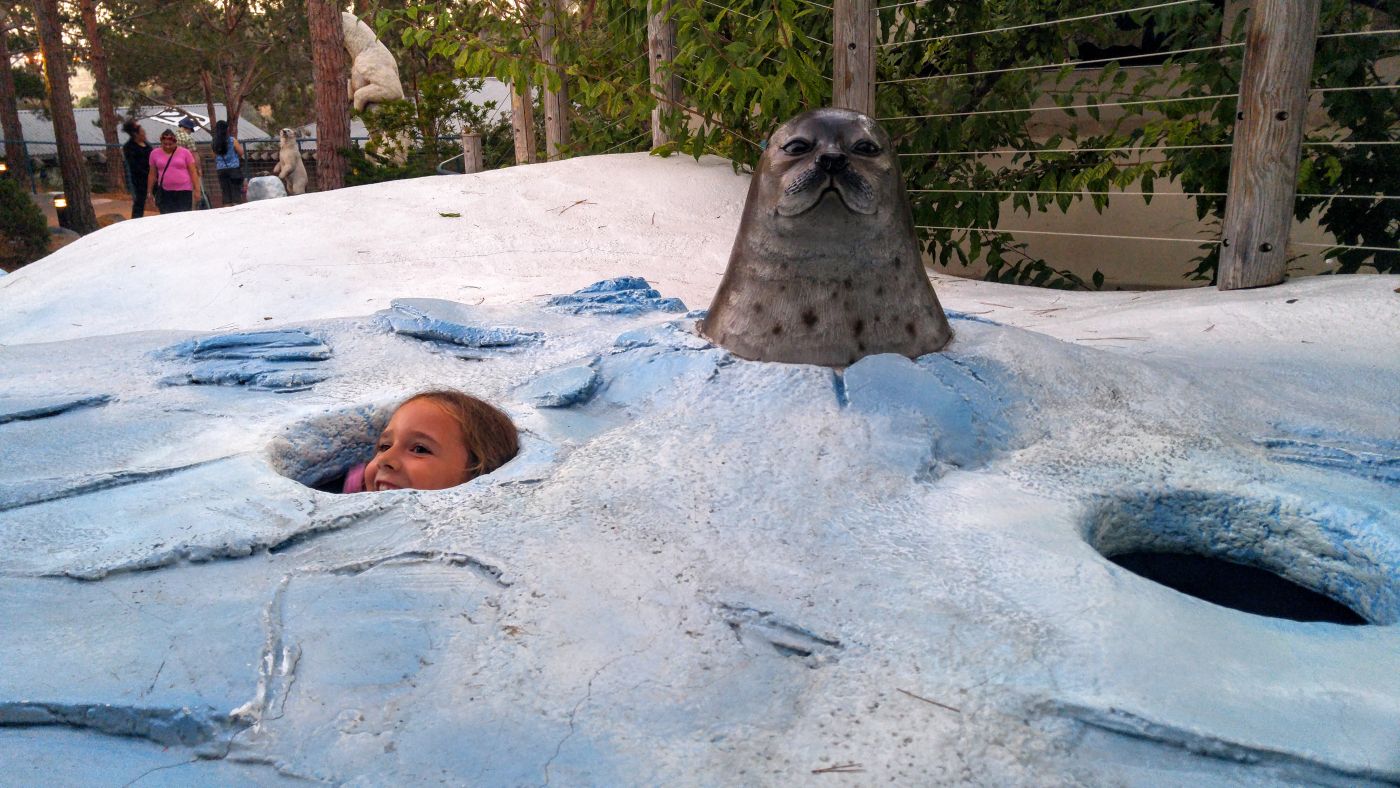 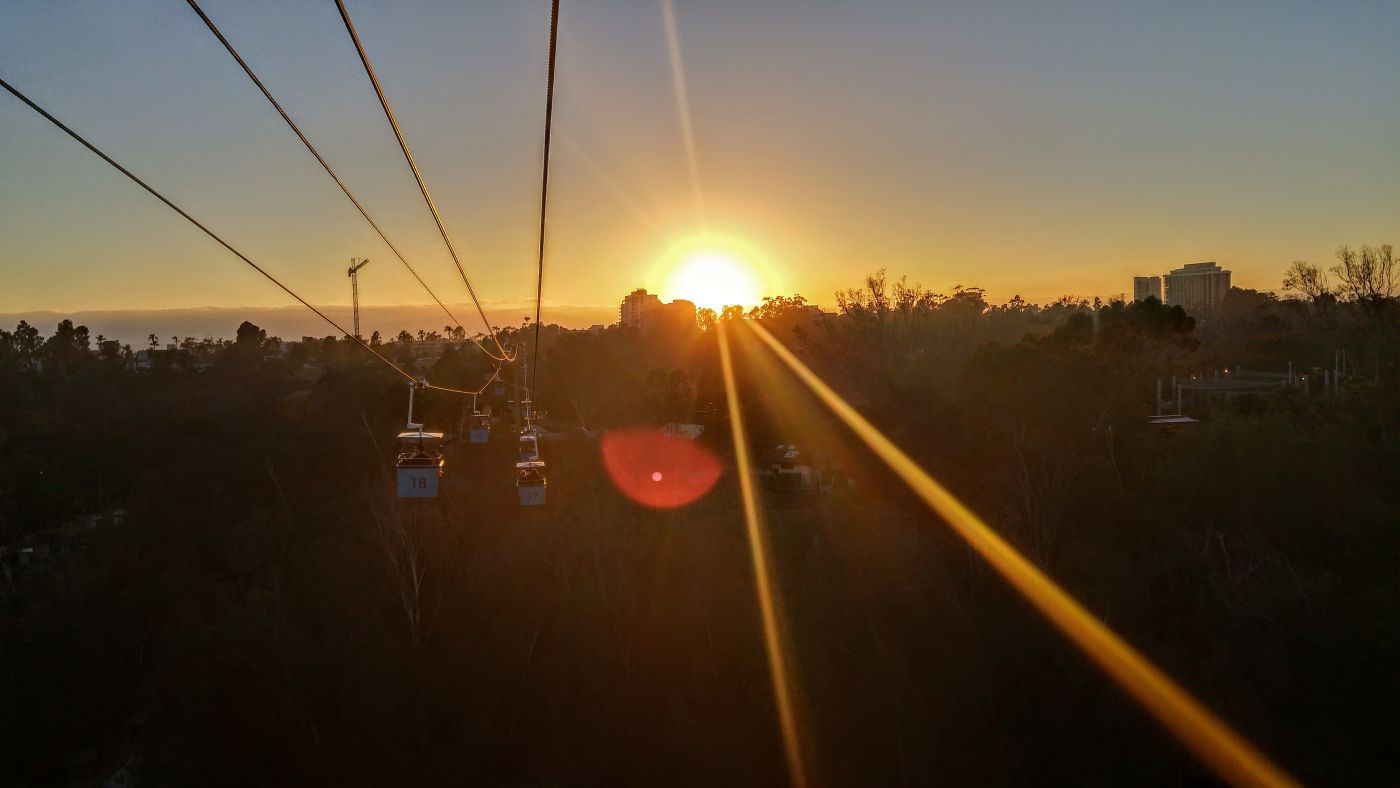 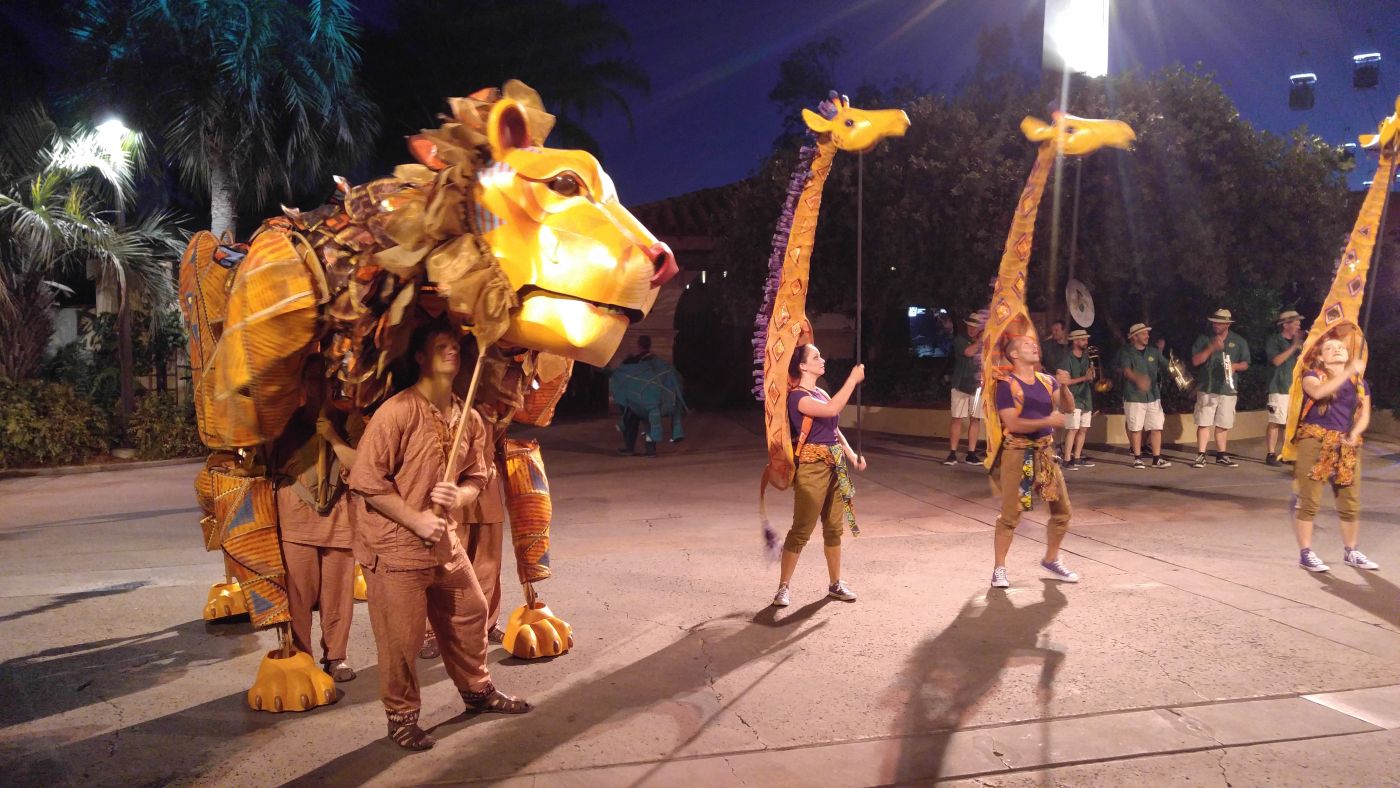 This truly amazing, full circle adventure to the zoo made for a beautiful day. It is easy to understand why the San Diego Zoo retains such high membership: It is a wonderful place to visit. A trip to the San Diego Zoo is a must-see for all who visit Southern California. We cannot wait to return.

6 comments on “Full Circle at the San Diego Zoo”