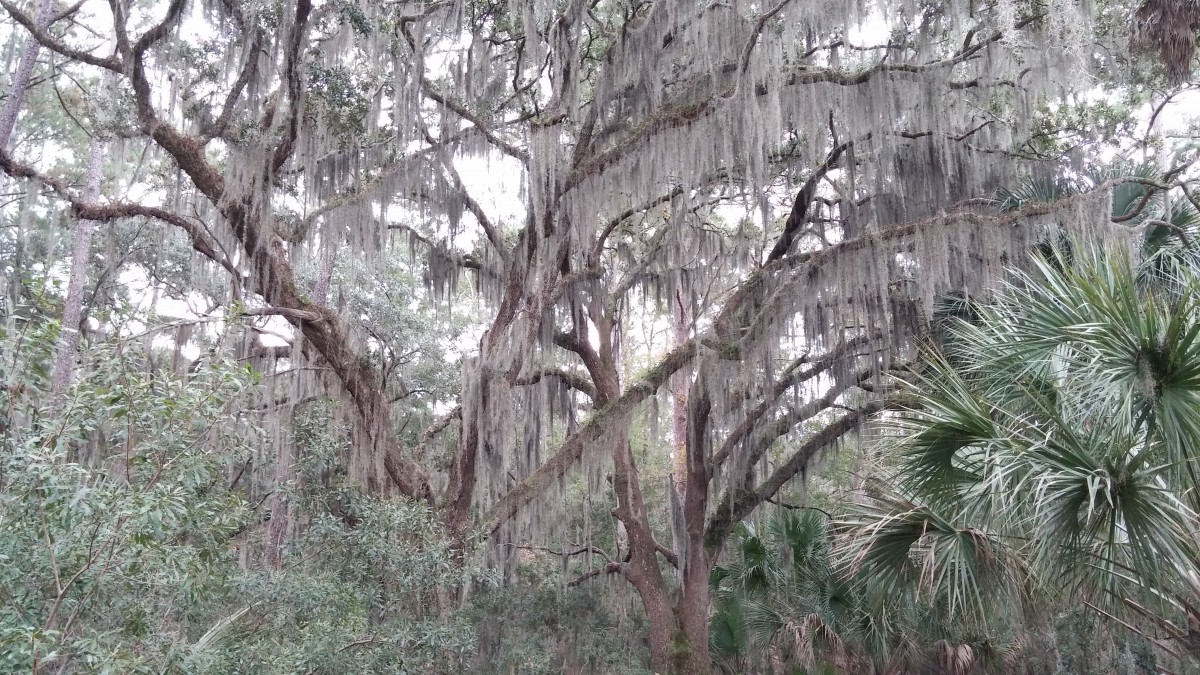 Similar to its southeastern park cousins, nature and history are united in adventure and ambiance in Georgia State Parks. Walk along a trail and you may find something of historical significance, like a Liquor Still Site or remnants of Confederate marches through the marsh. You also will navigate forests unlike any other in the U.S. Saw Palmettos, Spanish Moss, live oaks, swamps, mushrooms, pines, grasses and intracoastal waterways mark this park’s territory, while deer, lizards, egrets, alligators, snakes and crabs call it home. It is a peaceful, dreamy place full of things to occupy one’s time for a day or a month or forever. It is enchanting, and humble, and it is a perfect way to get into Georgia coasts and see them the way that they have looked for a long time.

We saw all kinds of visitors come and go at Skidaway Island State Park, many sporting bikes or kayaks, most planning on a hike. Skidaway Island State Park has four Lowcountry trails over six miles, all of which tell a story about Georgia. Sandpiper Trail, which is ADA accessible — one of the few we have seen as such on our journey — is a one-mile loop that winds through salt flats, tidal creeks, gorgeous maritime forests through and around island “hammocks,” which are raised beds that support plant life requiring higher ground. Dead trees killed by pine beetles line paths and creeks and serve as homes to snakes, squirrels, bats and more. It also includes Confederate Earthworks, structures new to us but found throughout the forest. These v-shaped mounds were created for off-duty gun crews for rest during the the Civil War. 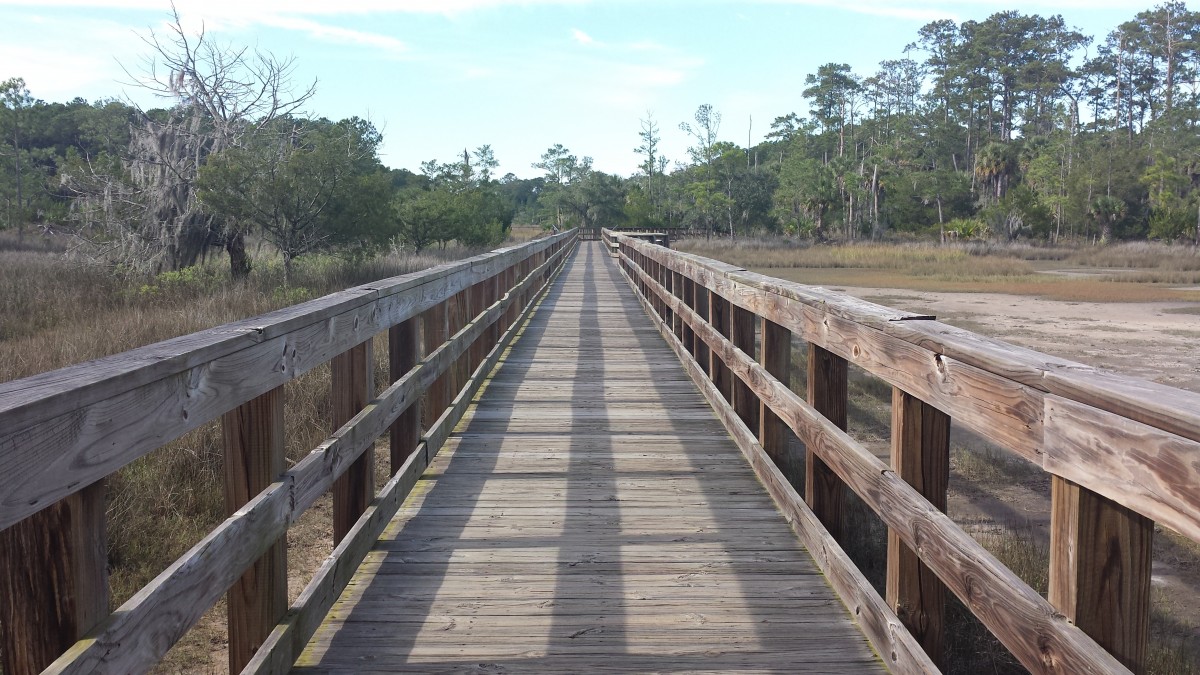 Big Ferry Trail can be a two- or three-mile jaunt depending on which way one chooses to go. Included along its path are earthworks, a liquor still, fresh and saltwater sloughs, shell middens and alligator ponds, which do provide a home for the occasional alligator, and also for birds, reptiles and amphibians. Avian Loop Trail, another one-mile trail, takes you to the intracoastal waterway, a peaceful location to watch birds or observe the tides. And all of these trails can be combined via the Connector Trail, where you can discover the unwanted, invasive Chinese Tallow forest. Efforts are underway to exterminate these marauders of the forest and revive it to its original splendor.

Areas of Skidaway Island State Park are marked by other informative quips about its role in various wars. Skidaway Island is difficult to navigate and was often used as a hideout or for sneak attacks. There is also an observation tower on the intracoastal waterway, which makes for a great place to observe the Georgia coast, to meditate or for a picnic. The campground is quiet and all of the sites are enormous. Many of the campsites now accommodate rigs requiring fifty-amp service and full hook-ups, and there were old soul tenters and hammockers, too. The entire campground is ADA accessible, and even offers well-marked campsites and facilities indicating so. Finally, it offers a sweet little Interpretive Center on site for up close and personal visits with stuffed birds and live snakes, turtles, alligators, lizards and other creatures of this forest. It also has a replica of a giant sloth. Ten feet tall and really, really old, the giant sloth roamed this area of Georgia over ten thousand years ago.

In the words of Pi, “The presence of God is the finest of rewards.” (Life of Pi) The Divine can be found here. 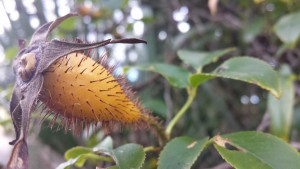 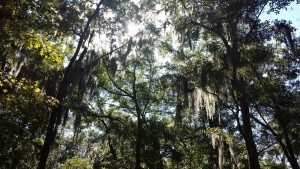 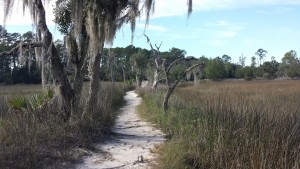 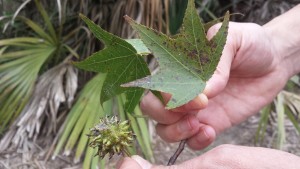 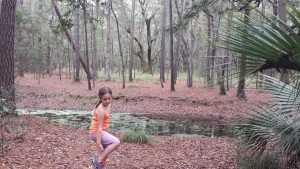 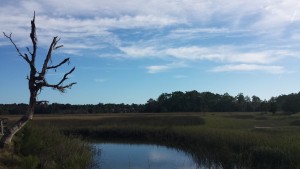 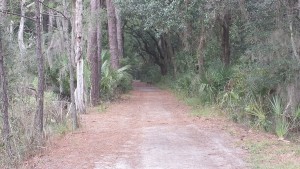 A Young Buck Stares Back. 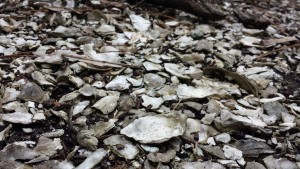 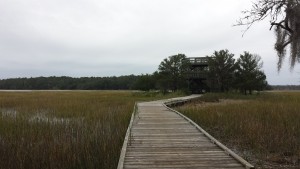 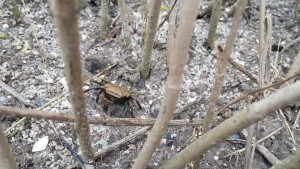 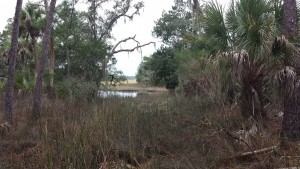 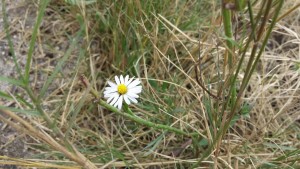 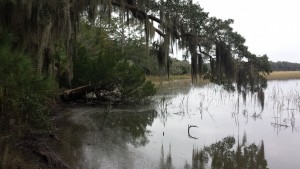 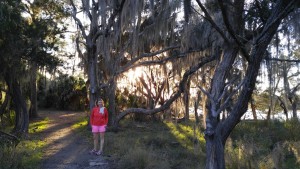 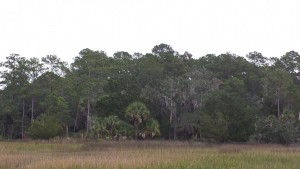 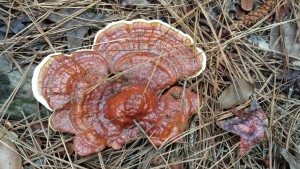 One of Many Mushrooms in the Forest. 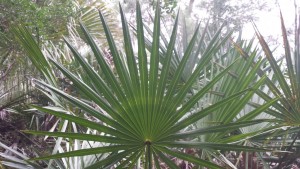