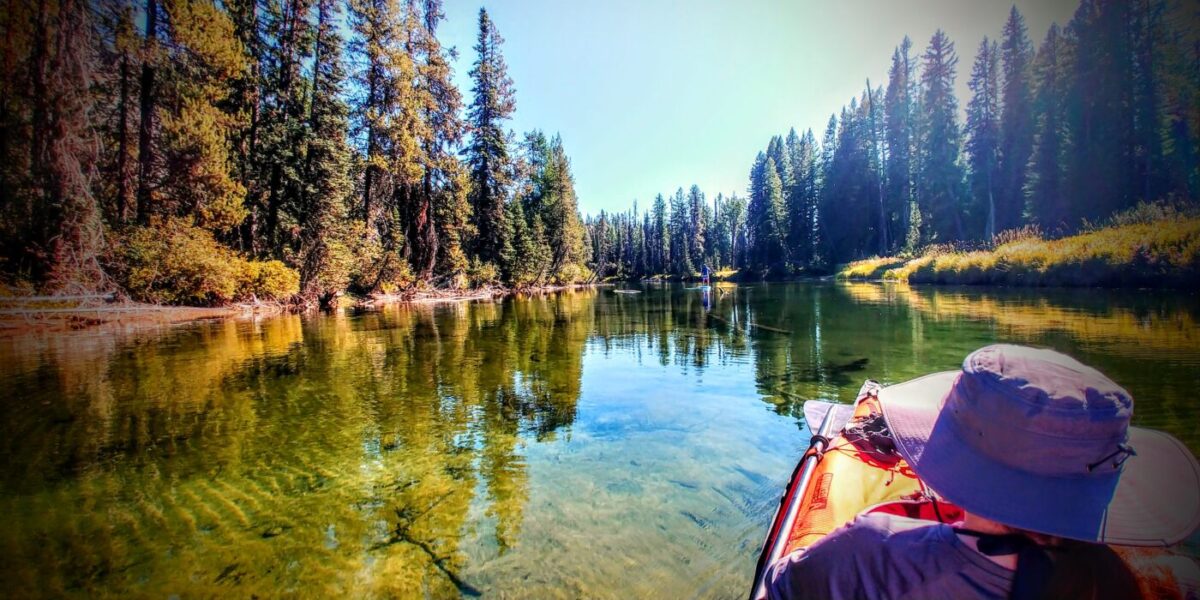 Our first proper destination outside of Metro-Boise was McCall, Idaho. Typical — probably — for many new to the area, or for those who really don’t want to travel very far, McCall is a relatively short drive and, thus, easily accessible — just over two hours — from Boise. Construction, kayak unloading backups, falling rocks, game crossing, or an accident would be your only hinderances up I-55, but that can all be managed as you meander a beautiful, scenic journey alongside the Payette River. Gorgeous pines, cliffs and rock formations, winding roads, a few charming towns, and lots of horse and cattle ranches — samplings, really, of the majestic variety of landscape that is Idaho.

Situated on the shores of 10,000-year-old Payette Lake, surrounded by Payette National Forest and Ponderosa State Park, McCall at 5,000 feet was a perfect start to our life of “recreating” here in Idaho. Generous friends loaned us inflatables — a paddleboard and two-person kayak, plus gear — to test the waters and natural playground of greater McCall, which we did to our heart’s content. We swam, kayaked and paddled in the refreshing, choppy, chilly waters of glacial Payette Lake, as well as up the calm, clear, pristine winding Payette River. We hiked up the low mountains surrounding Payette Lake to observe the beautiful surroundings from where the ospreys fly.

Peoples inhabiting this place before us include Native Americans Tukudika, Shoshone, and Nez Perce — a federally recognized Tribal Nation of over 3,500 in Central Idaho — who were here mostly during summers, and then migrated elsewhere during the very long, cold winters. Others who followed include French Canadian fur trappers, and later miners. McCall, as we know it now, eventually was establish by Thomas and Louisa McCall in 1889, who set up a school, saloon, hotel, a post office, and a sawmill.

A winter carnival and a turn toward tourism in the early 1900s set the trajectory to what McCall has become — an all-season, year-round resort town and recreation destination.

McCall is notoriously busy during summer, so, as usual, we chose to go during the off-season, which worked out well for us, as we felt that we had McCall mostly to ourselves. There were a few hikers and kayakers, but foot and paddle traffic was low overall.

Noteworthy to us as well, of course, was a lure to dark skies. Although McCall is not a Dark Sky location proper, it still offers little light pollution and, thus, a clearer dark sky.

At about 1:30 AM, we all were awake — probably some internal call to go out, the amateur astronomers that we are — and so we bundled up and headed out to the lay on the dock just outside of the condo. As we stretched out under the stars, the dock gently bobbing from the easy ripples of Payette Lake, we put our heads together and looked up. Shooting star after shooting star soared into and out of view. The Moon said hello, Arcturus and Venus were present, and then the Milky Way appeared. It was Luna’s first glimpse of the Milky Way, and so made for a precious a moment for all us. It is like falling in the love for the first time, no? Something delicious and delightful and full of wonder, but also an awareness of that feeling of immediate, momentary flutter.

So there we were, cold but amorous, and together, under the stars, being, doing … just that. It is why we do what we do, to be present in peace, harmony, and abundance from place and space, made up of beautiful moments. Just love.

McCall was — is — great. We will return for sure, probably to the cabins of Ponderosa State Park, where we can build a fire and be further under dark sky, as well as the canopy of 300-year-old pines that smell of cedar, and caretake birds and stoats and the forest.

Ah, we are in love — in love with the Pacific Northwest. It has our hearts.