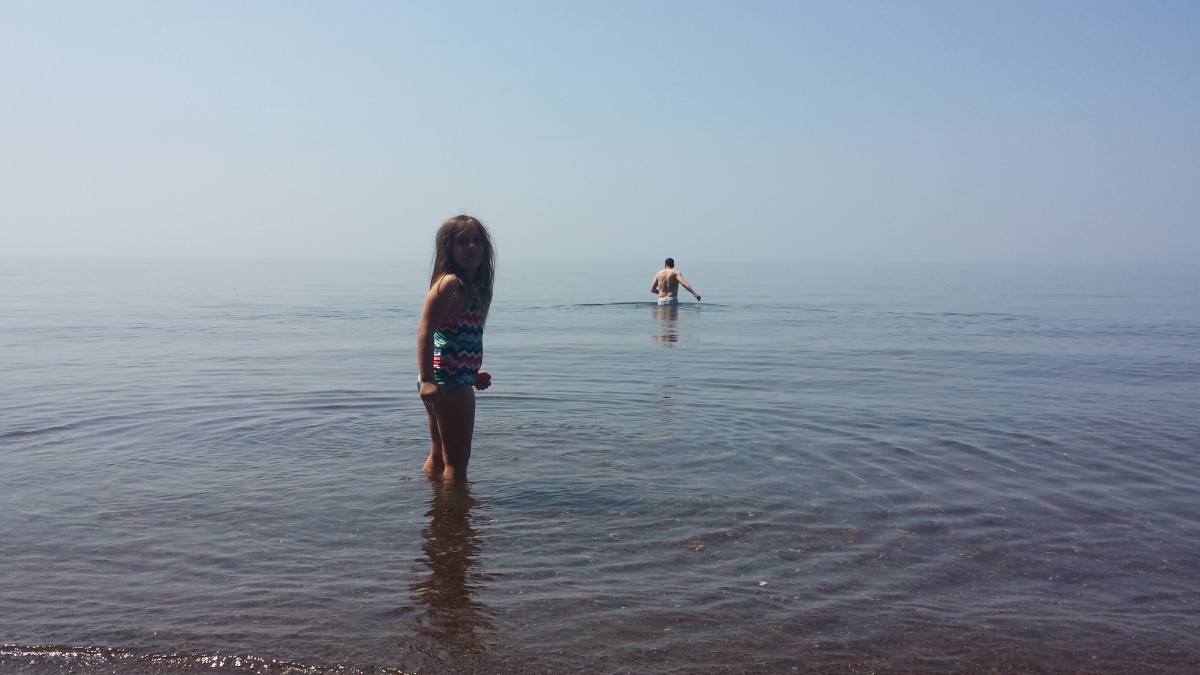 The Porcupine Mountains of the Upper Peninsula of Michigan are one of those special places that everyone should try to see just once in a lifetime. I realize that there are millions of places that one should try to see one’s a lifetime — pyramids, canyons or maybe some coral reefs — but I think that the Porkies should make the cut. I have been fortunate to have visited the Porcupine Mountains twice now — once on the first epic roadtrip that I took with my best friend twenty years ago, one which I have discussed so often, and now with my husband and daughter. It is a place that I wanted to experience with them, because it is so beautiful, so remote and so special. The first time I entered the Porcupine Mountains Wilderness State Park, I remember thinking, So THIS is what a forest looks like. But then we discovered the waterfalls and river, and then we found Lake Superior. I am a Great Lakes girl, and I became enchanted by Lake Superior, humbled by its chill, its storms and its surprising personality changes. It did not disappoint this time around as Luna, Scot and I entered the great forest, then the campground and then its wilderness and waters. The Porcupine Mountains Wilderness State Park is one of my favorite places on Earth. We’d like to share it with you.

Yes, there are mountains in Michigan — old, worn down small ones called the Porcupine Mountains, whose profile resembled that of a porcupine to the residents of the region, the Ojibwa. Covering 60,000 acres and surrounded by the Ottawa National Forest, the Porcupine Mountains Wilderness State Park “is one of the few remaining large wilderness areas in the Midwest” and includes virgin timber, lakes, rivers, waterfalls, escarpments … and bears. (Wikipedia, Michigandnr.com) Approximately 18,000 black bears live in Michigan, about eighty-five percent of which live in The Porkies. Bear sightings are very common in the State Park. Sadly, we did not see one, but I still have hope.

We have become fond of wilderness areas. What makes the Porcupine Mountains Wilderness State Park so unique is that it is the only one in Michigan, designated so by the legislature in 1945 to protect what is the largest collection of “old growth northern hardwood forest in North America west of the Adirondack Mountains,” abundant with “sugar maple, American basswood, eastern hemlock and yellow birch.” (Wikipedia) The park is not just rich in old growth forest. It also encompasses vast amounts of secluded Lake Superior shoreline along the Upper Peninsula’s northwest banks, gorgeous geologic representations, cascading waterfalls, rapid rivers and loads of wildlife. One or two very long, winding roads can take you deep into the forest, which is a haven for hiking any of the eighty-seven miles of trails; or camping, skiing, swimming, backpacking, cycling, fishing, kayaking, canoeing, rock hunting or climbing; to watch dreamy sunsets or to stargaze; or simply just to be, smell, wonder, experience and become with nature.

Typical of most of the Michigan’s Upper Peninsula, the Porcupine Mountains have a copper mining history. The region is loaded with ores, particularly iron, copper, nickel and silver. Moreover, other beautiful and significant geological formations are present, specifically basalt and conglomerate escarpments and bedrock loaded with copper. When river levels are low, especially those of the Presque Isle River, it is easy to walk on and along the escarpments, surrounded by their copper-colored waters. Lake Superior itself is a geologist’s dream with its history of rifts, magma, diabase sills, amethyst fields and ice sheets. The shoreline of Lake Superior at the Porcupine Mountains is quite simply an awesome example of Great Lake’s rocky story. One can walk out waist-deep into the chilly waters on flat sheets of shale as far as the eye can see. There is so much to experience at the Porcupine Mountains. Who wants to sit and read a book about the forest, the lakes and geology when one can go to The Porkies to experience it first hand?

Well, for many, including this author and her family, the many facets of the Porcupine Mountain Wilderness State Park are the very reasons we ventured into it, especially for Luna. The small, ancient mountain range that is The Porkies, the tangible escarpments of the Presque Isle River and their falls, the old growth forest and the stunning water and shores of Lake Superior are absolutely what a child learning naturally needed for a hands-on experience, and what her parents needed for serenity. To enhance our exposure to this wonderful place, we went off-the-grid, camping at the Presque Isle Rustic Campground. No electricity, no full hookups, just a little help from the sun and water from the deep. 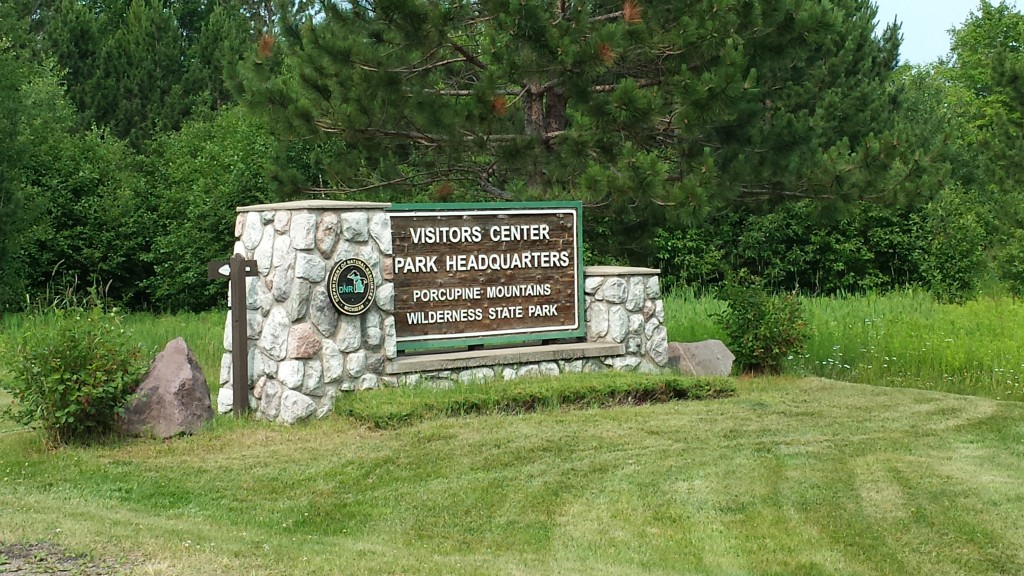 Going off-the-grid is not for everyone, but it is for us. We consciously chose to expose Luna to camping — and living — off-the-grid without any of the luxuries, amenities, habits and assumptions that come from daily living in abundance. We understand that camping in an RV is fancier and a little more luxurious than tent camping, but not much. It really just has harder sides than a tent, and it is warmer. Our experience at the rustic campground took us back to those days when we were tenting, unplugged, candle-lit and washing our dishes in a bucket filled with pump water. We loved every minute of it.

The Presque Isle Rustic Campground is the western-most campground in The Porkies. It is accessible from the western edge of the mountains, or can be found taking the long and incredibly beautiful twenty-five mile drive through the forest that begins at the entrance to the State Park near Ontonagon. And when I say rustic, I mean that there is no full hookup service — no electricity, no running water, no sewer. There is a vault toilet or two, and a handsome, dependable old hand pump that draws delicious, super cold water from below the ground. There are no electrical boxes or street lamps, just the sunrise, sunset and the stars. And there are very sturdy, bear-proof garbage and recycling containers for those nuisance bears that want to hang around the campground. Sounds fun, no? It is!

We camped on a large site, which offered just enough midday sun for us to utilize our portable solar panels, which we used for our twelve-volt overhead lights and running the freshwater tank that we filled with water from the hand pump. We also used the sun’s energy to open and close the slideout of our camper. We do not have a generator, but one side of the campground is designated for generator use for those who need to know. 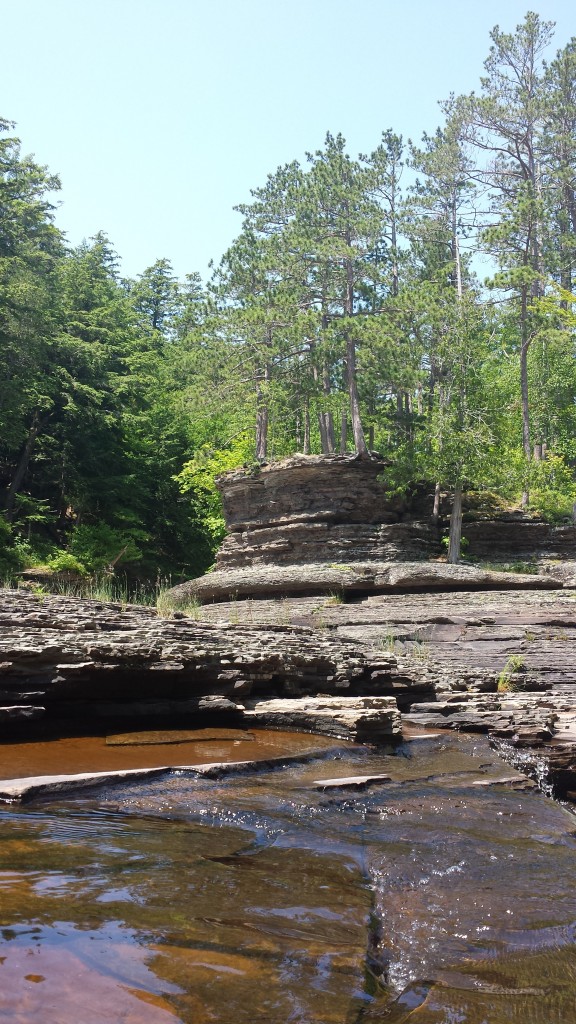 The fire pit was huge and incredibly durable. Campers are allowed to gather downed or dead wood from the forest for kindling or firewood. The hand pump is on the west side of the campground way back in the forest. Be sure to bring containers for transporting water to your campsite and head gear of some sort as the mosquitos thrive in the stagnant water. There are four vault toilet houses total, two on each side of the campground. We tended to use our in-house toilet, which enabled us to learn more about how to maintain it. Plus, I really don’t like vault toilets, and neither does Luna.

But the best part of all is that the rustic campground is next to the Presque Isle River, the falls that follow it down river, the hiking trails surrounding it, the escarpments atop and along it, and the Lake Superior shoreline that receives its waters — a plethora of astounding natural activity. I simply had to show Luna and Scot all that I love about it.

There is a staircase that leads down the bluff to the lake, and Luna wanted to venture to it right away to collect rocks. We were all surprised by the shale-covered shoreline, the cold and utterly clear water, and its endless magnificence. For most of our visit there, the horizon was invisible. It was as though one could walk into eternity, consumed by the infamous lake and its mysteries. But it did not make us afraid. We were instead humbled by it. It was — is — breathtaking, quite literally and figuratively. One must venture to the rustic campground or the accessible hiking trails near it in order to see this part of Lake Superior; very few were there and it was very quiet.

Then another trail took us through the woods to the first half of the fork in the river, where stagnate water lay, copper in color and warm. Closer to lake level, it is easy to walk back and forth between it and Lake Superior. We continued on through the woods until we heard rushing water. Soon we were on the suspension bridge and over the first series of falls, where intimidating, swirling eddies continue to carve circles in the escarpments. The trail led onward and we followed.

Finally we came to the massive escarpments and walked across them following the blue trail markers, which were visible because the water was low. We walked and sat and talked about them. We found tadpoles in some of the pools. We noticed roots and moss and other plant life protruding from layers of shale. Then we hiked some more, ate some lunch above the falls and found our way back to camp so that we could go swimming in refreshing Lake Superior and collect more rocks, which we would have done all evening had it not been for the arrival of horseflies — the only downer of the trip. That evening the sunset punctuated the horizon with deep orange and golden-yellow stripes. That night, the stars were alive and bright and the campground quiet. We all fell asleep early in the dark of night.

There are other options for modern camping at Union Bay near Ontonogan, which offers electrical and water service and also has a bathhouse. Rustic cabins and yurts are sprinkled throughout the park, as well as over eighty-seven miles of hiking trails, including to Lake of the Clouds and a lookout tower. For the very adventurous, wilderness camping is permitted, too. Headquarters has a small education center with (stuffed) examples of some of the wildlife that live in the forest.

Two nights camping in the rustic campground was enough for us to hike the two-plus (not always easy) miles of trails surrounding the Presque Isle River and to access the calmer, more secluded side of Lake Superior. We were able to forget charging batteries, cleaning sewer lines or doing dishes. All devices were “off,” because there was absolutely no signal. Hammocks were raised, fires were built, we saw the Milky Way. Lake Superior kicks ass. Escarpments are cool. Waterfalls are beautiful and intimidating and deafening. Fire and ice make magic. The oblivion is exciting. We love nature, and we hope that you visit the Porcupine Mountains Wilderness State Park someday (if you haven’t already). We believe that you will love it, too.

What We Learned/Would Do Differently

Luna: Hmm … well … I liked the waterfalls we saw. I liked the big, big lake that was cold and clear. That’s all I have to say about that.

Scot: The Porcupine Mountains is one of the locations that Liza has been talking about for quite some time now. She wanted to share it with us and now you know why. I will follow her anywhere. 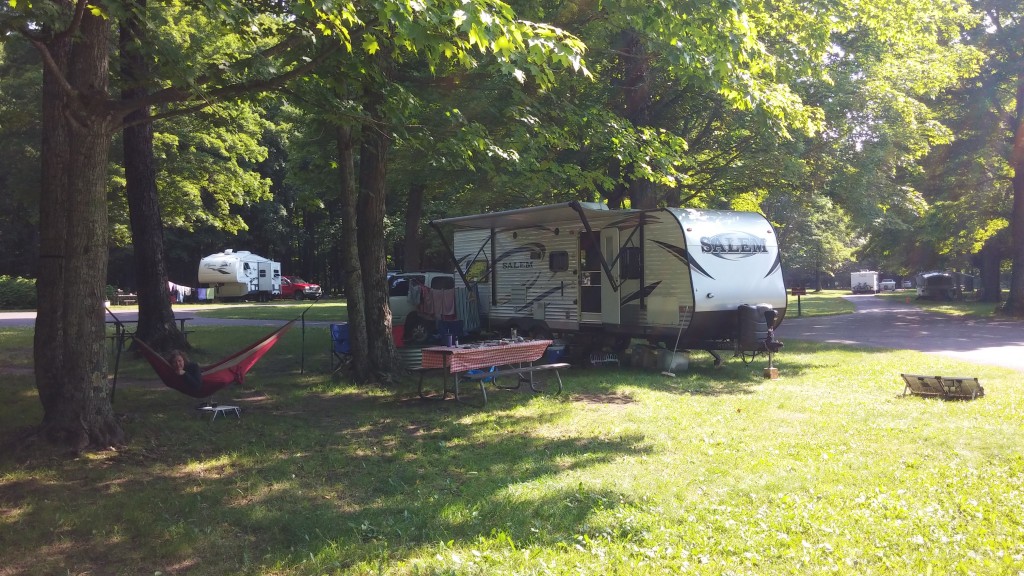 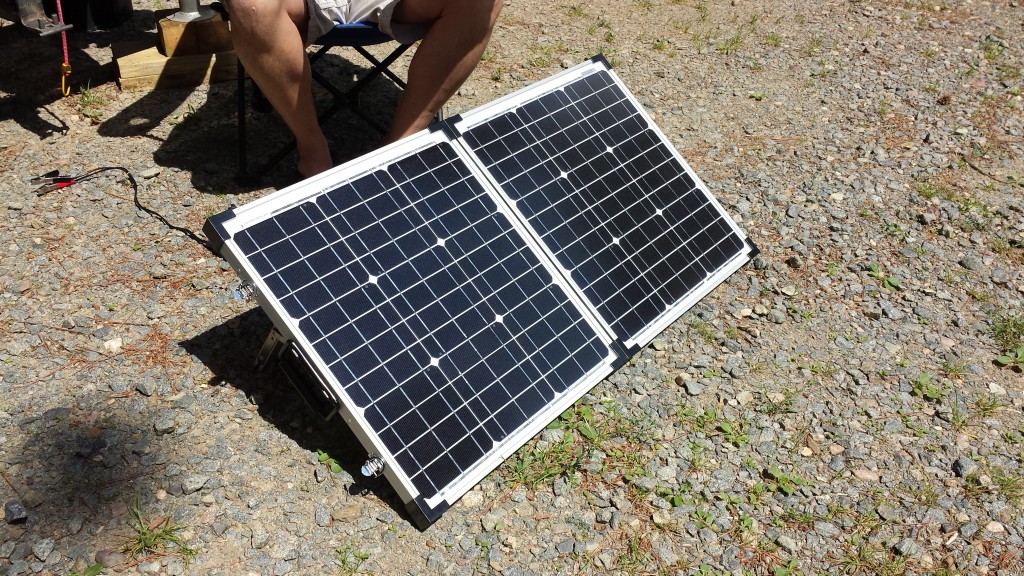 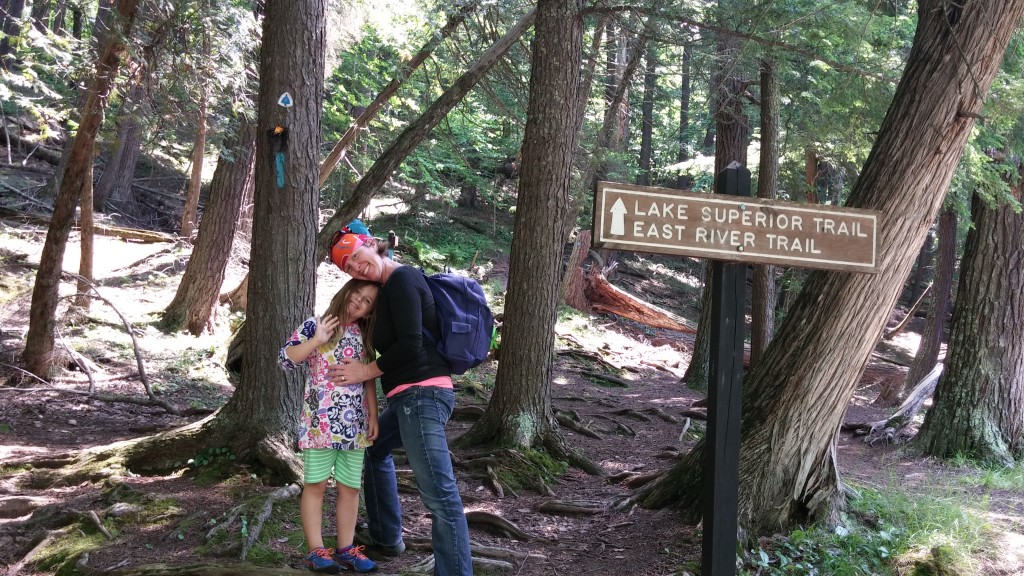 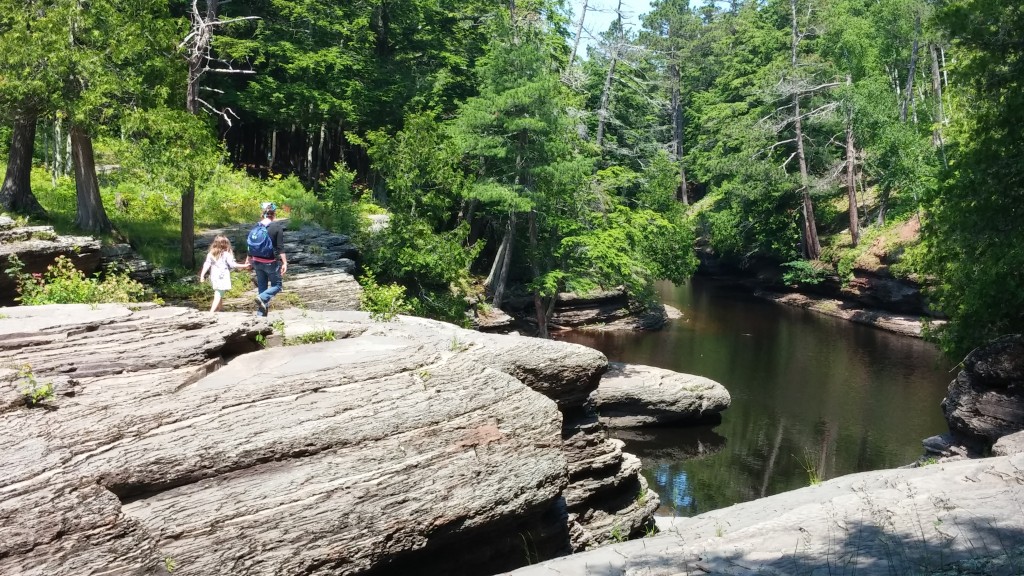 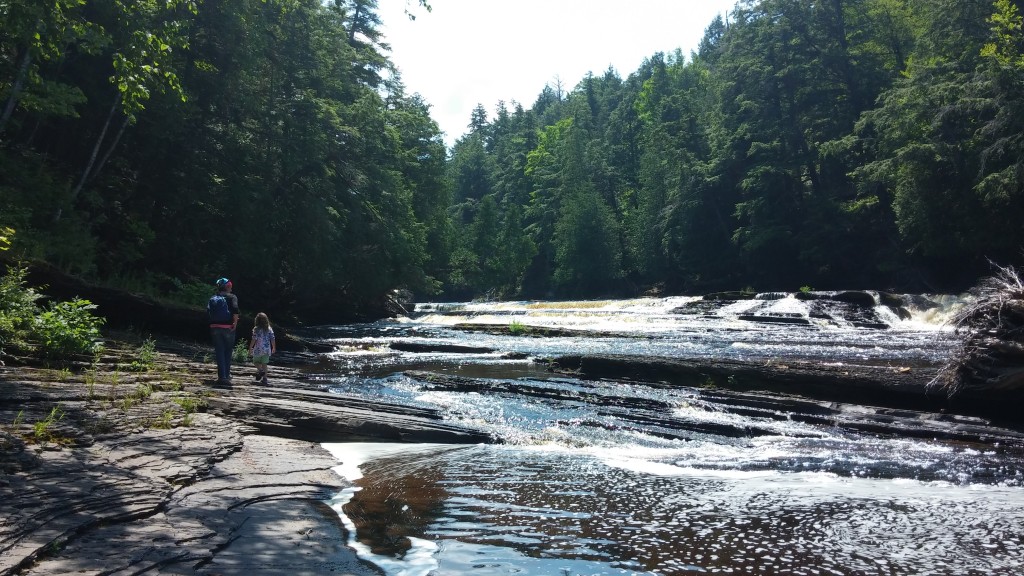 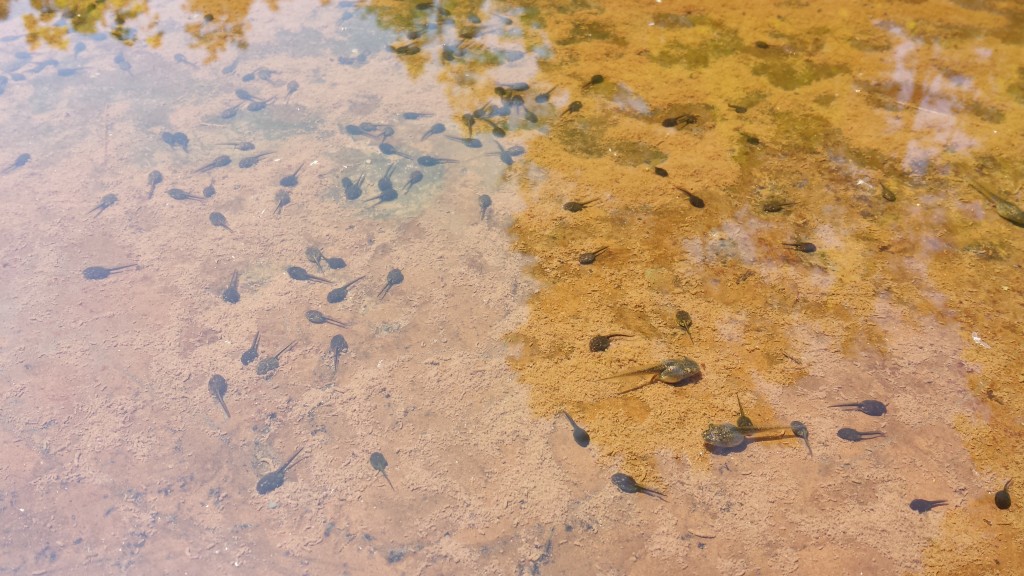 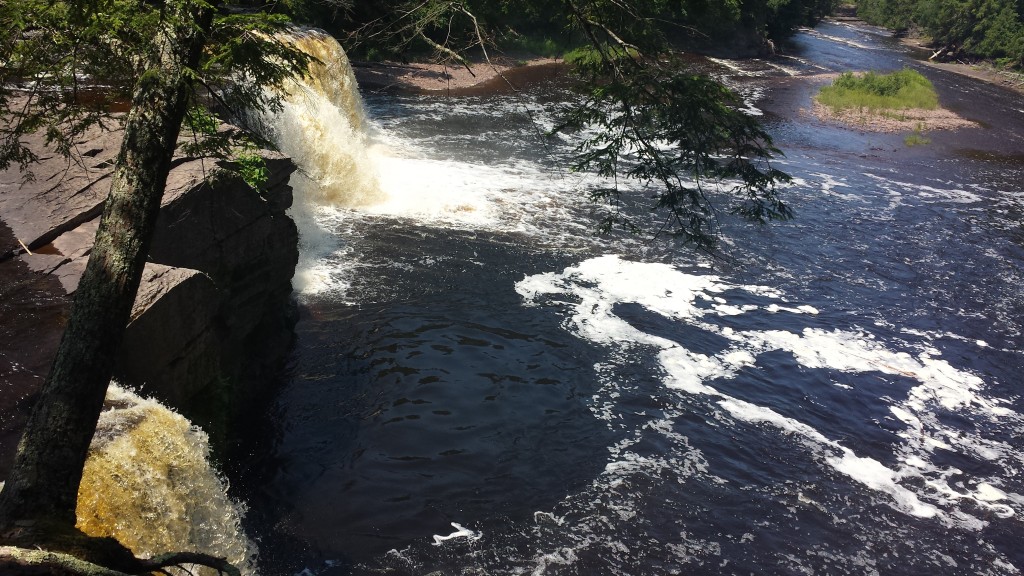 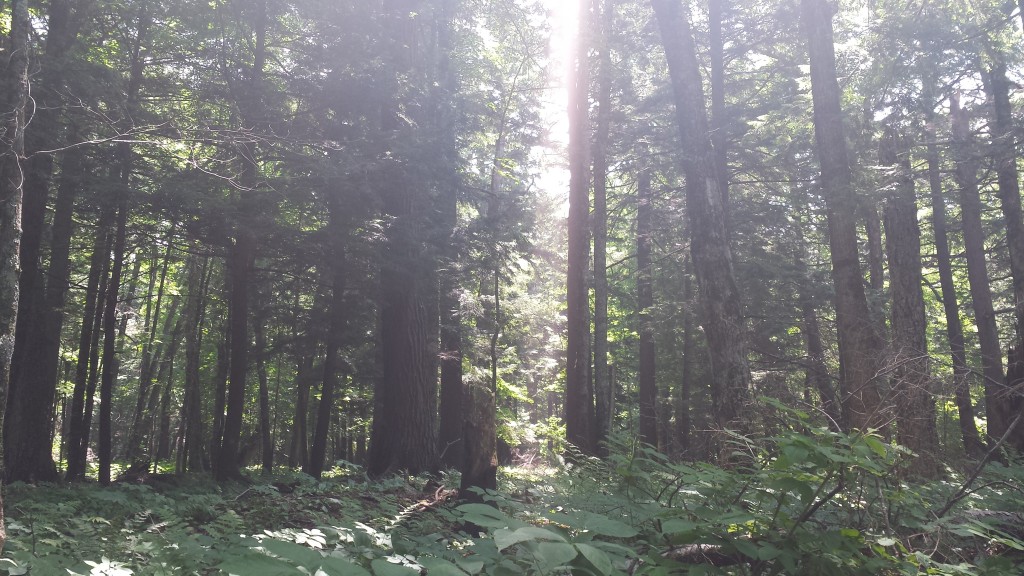 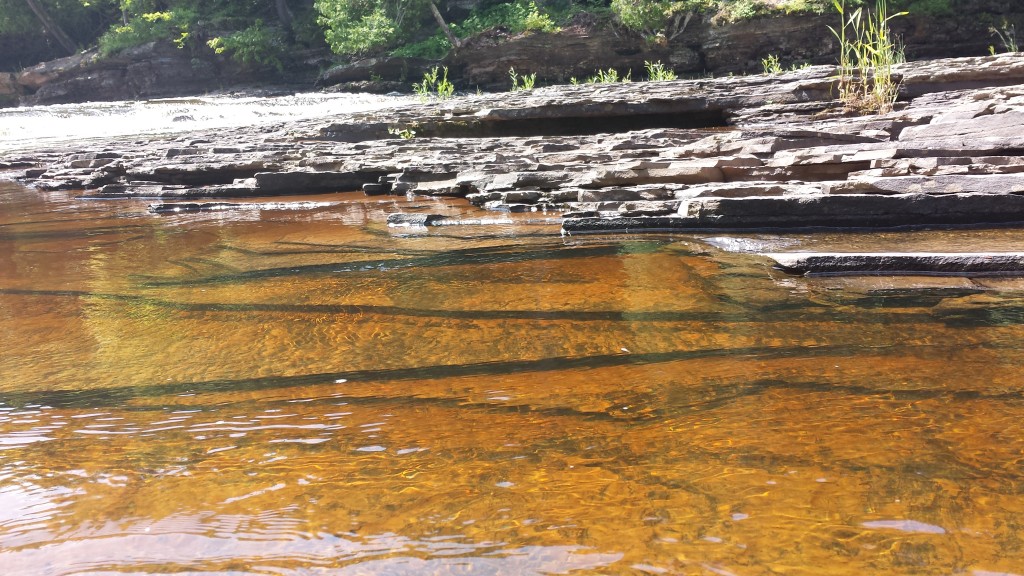 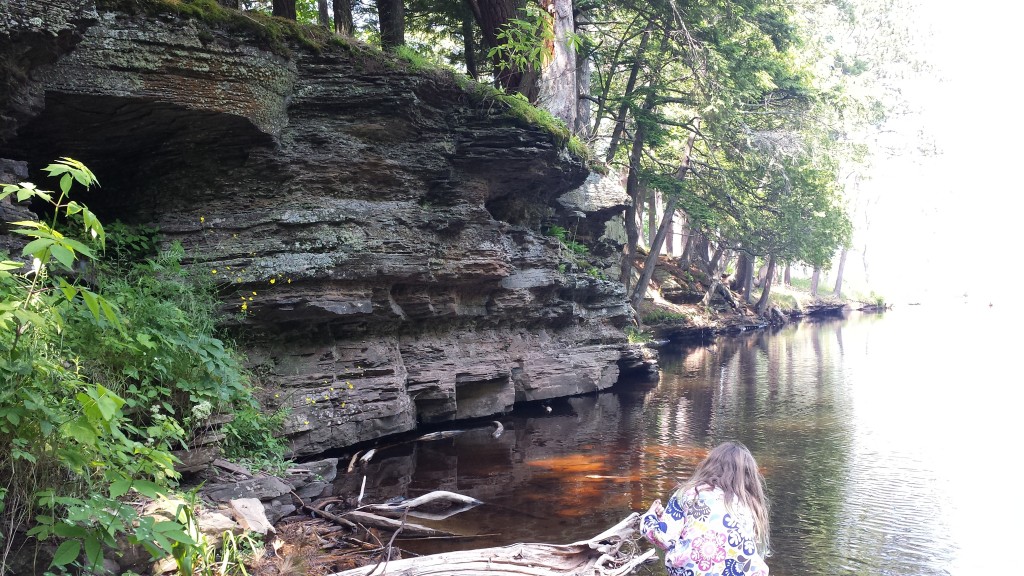 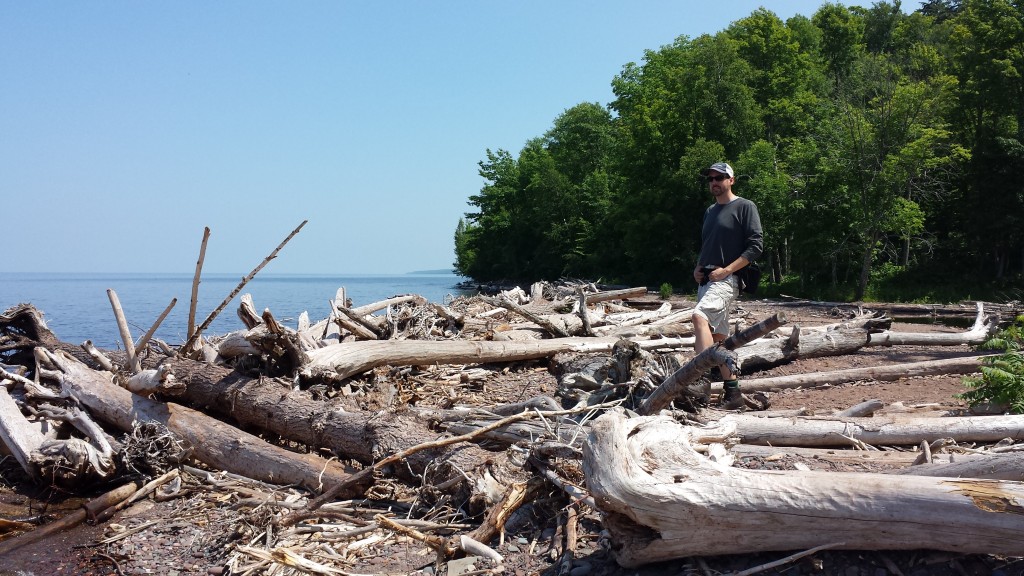 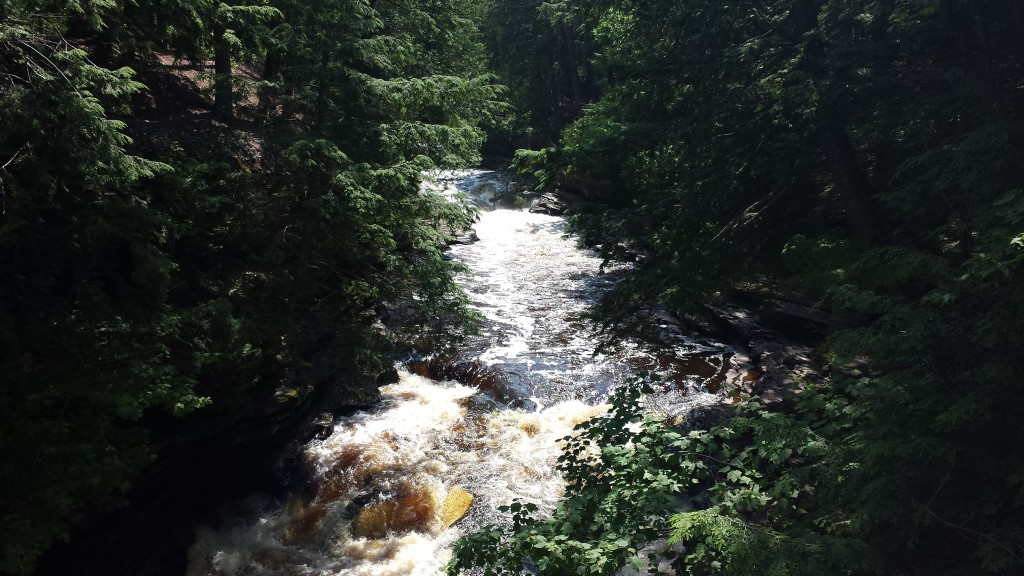 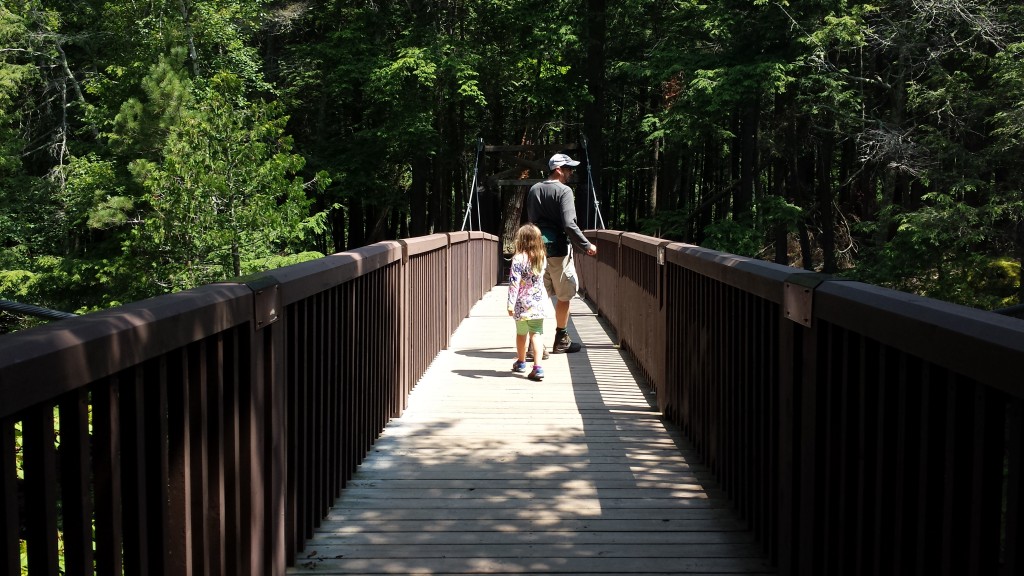 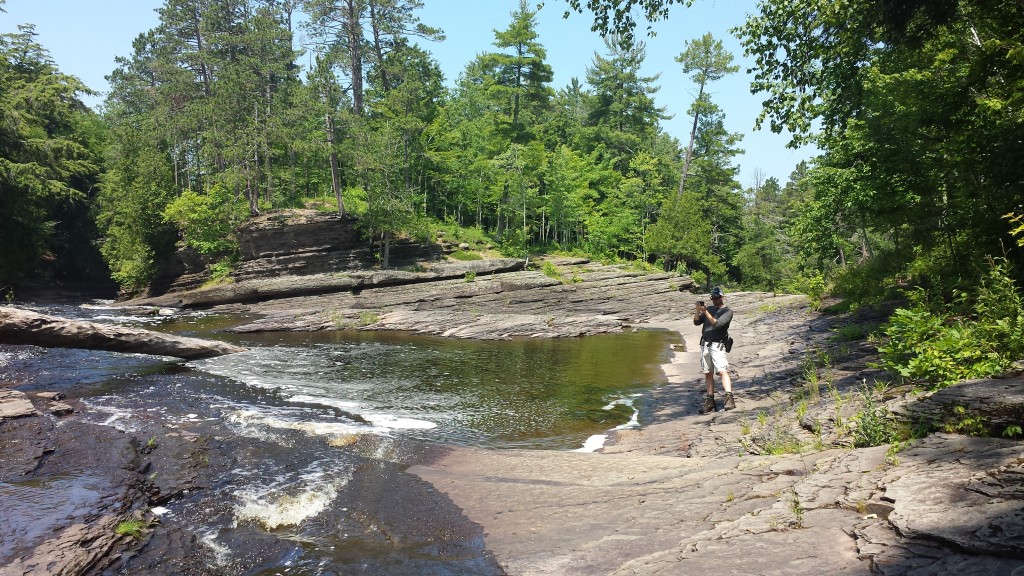 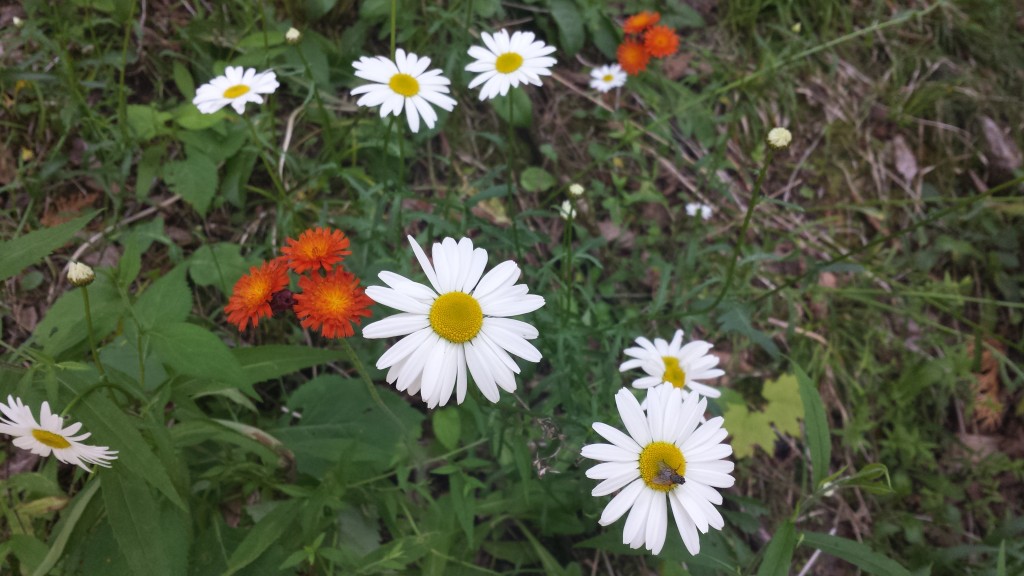 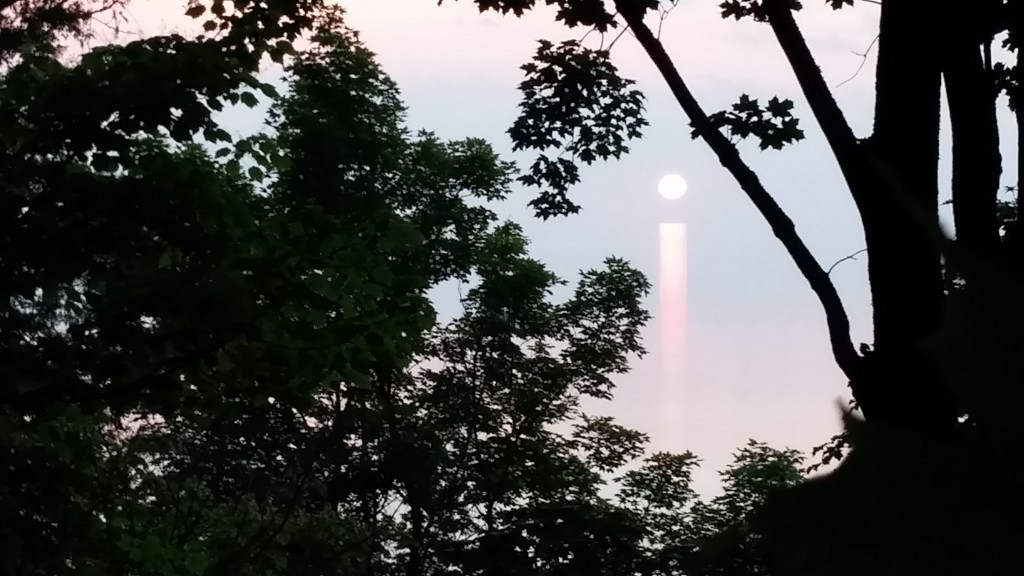 Sunset on Lake Superior from the Porcupine Mountains, MI. 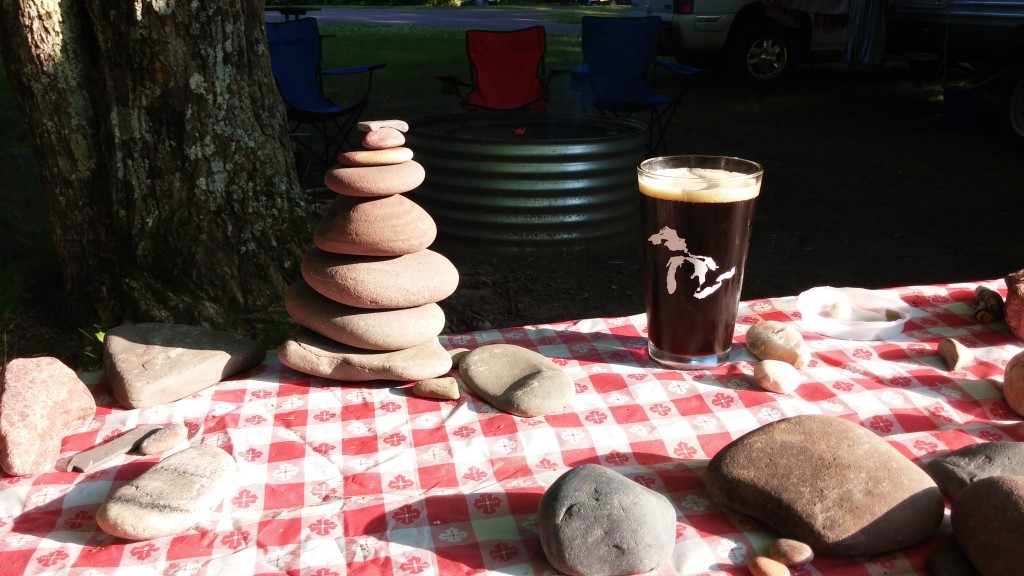 2 comments on “Camping in the Porcupine Mountains, MI”