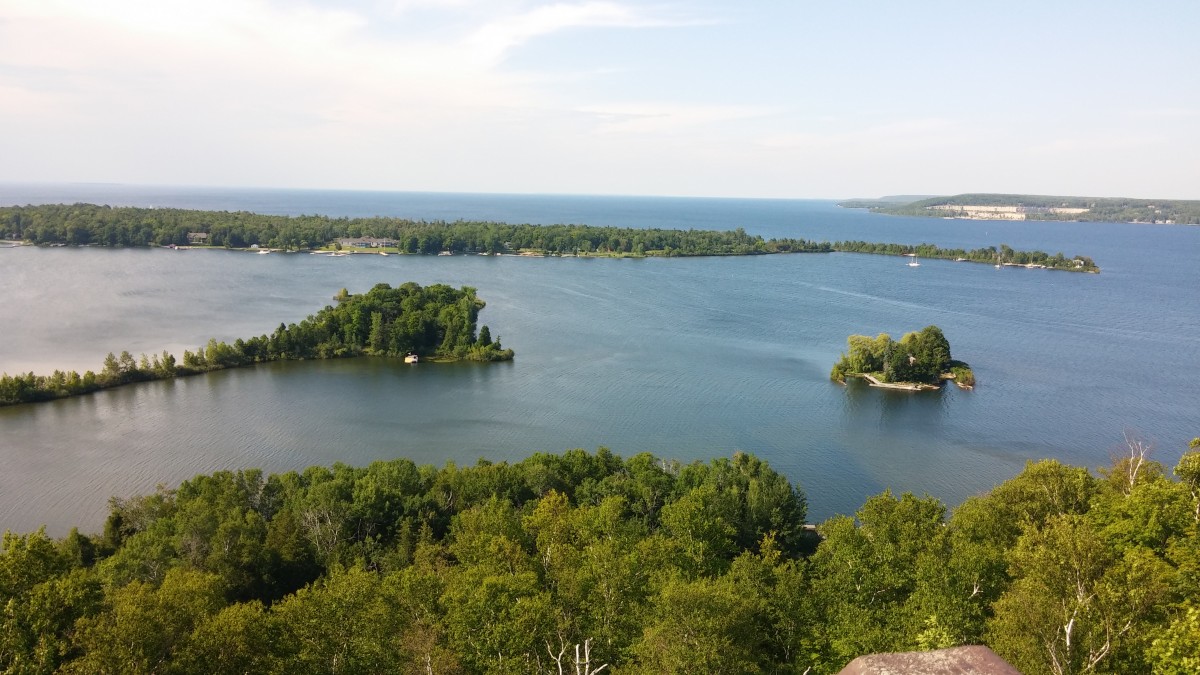 Scot and I are peninsula people. We grew up in Michigan; we have a fondness for Spain; we are intrigued by dangling Florida, hoping to camp near the Everglades, Little Havana and maybe even the Keys; I like Cape Cod; and we will make it to Italy and Greece eventually. We also have crushes on all things Great Lakes. I think many Midwesterners do. What’s not to love about a giant basin that was carved out by the icy claws of receding glaciers? There is much to love, and we love all of it. Having grown up on the east side of Lake Michigan, we always have been curious about what is going on across the lake, where other finger-like projections protrude from different parts of the scraped basin. Maybe it’s because we also have slight crushes on the Packers, or maybe it’s our love of cheese curds, or perhaps its simply because, in order to arrive at a peninsula, one must make his or her way to it, even going out of one’s way to land there. And, peninsula people do it their way, which is always interesting to us. In any case, Sturgeon Bay, Wisconsin, has been calling for a long time now. It was time we paid her a visit.

The history of Sturgeon Bay seems to go hand-in-hand with the history of Door County, which mimics much of other Great Lakes’ settlement histories and stories of the 19th century: Predominately white pioneers, farmers, loggers and fisherman made room for their way of life by forcing out much of the Native American population, specifically the Potawatomi in this region. Door County saw an influx of French mariners, who tried to navigate the treacherous strait between the peninsula and Washington Island, many of whom went down with their ships, resulting in the waterway’s aptly named Porte des Mortes or “Death’s Door.” Eventually, Belgian Walloons settled there, and, for a short time during World War II, Door County was home to a German POW camp at Fish Creek. Even so, from very early on, Sturgeon Bay was a tourist draw and continues to be so.

Sturgeon Bay and the surrounding area reminds us of our native state of Michigan’s tourist destinations of Traverse City, Saugatuck and South Haven, with marinas, shops, boardwalks, wineries and art galleries all influenced by lakes and land. In and of themselves, those aspects embody wonderful details about and offerings from the beautiful, abundant Door County region of the Great Lakes. One can stroll both sides of the canal from downtown Sturgeon Bay by way of the Sturgeon Bay Boat Bridge for window shopping and outdoor dining, such as at Sonny’s. There are beautiful downtown parks and fishing piers in between marina pockets decorated with stunning yachts of various sizes and people. One also can find cheese shops, olive oil shops, retail shops and a scrumptious handful of pastry shops. Sturgeon Bay successfully caters to the tourist with grocery stores, laundries, take-outs and other vendors in and out of town selling famous regional sundry items, such as at Renard’s Cheese, Red Oak Winery or at one of many local restaurants for a legendary Door County fish boil.

Other interests include the Door County Maritime Museum, whose whistles can be heard from afar, and the Carnegie Free Library, now an historic place. The Third Avenue Historic District is cool and pretty. A fun find was Palmer Johnson Yachts, whose facility is right downtown, up close and personal. The Palmer Johnson facility brings an awareness that yachts are big, people are little. The enormity of the requirements of shipbuilding are larger than the ships themselves.

However, we aren’t very good at being tourists. We prefer blending in with the locals as much as possible, doing what they do, knowing a little bit about what they know. So we did just that, or tried. The Potawatomi State Park was a favorite destination for us. I also hit the delightful farm market downtown on a Saturday morning. We also enjoyed some music in the pavilion one evening. There are lots of cool old school taverns adorned with Old Style and Schlitz Beer signs that we would have enjoyed visiting, but we were instead patrons of Kick Coffee Shop and a new nano brewery called Starboard Brewing Company. We also wanted to find some fish in Algoma and travel to the Peninsula State Park up near Egg Harbor, but we didn’t do that either. So much to do, so little time!

There are many places for camping in Door County. To be honest, our campground location search was driven by our want to be in a setting for around ten days in the peninsula, but also to work steadily, if possible. As July drew nearer, and more summer vacationers were coming out in greater numbers, we felt the need to secure a site for a while. The campground that gave us this opportunity in the great peninsula of Wisconsin was Tranquil Timbers on the south side of Sturgeon Bay. It was there that we called home in Door County.

Tranquil Timbers Camping Resort, concealed just south of the enchanting Potawatomi State Park and slightly northwest of downtown Sturgeon Bay, offers lots of camping in the woods. It is an Encore/Thousand Trails member whose corporate feel is present at the campground. Thankfully, the staff operates and interacts like family, extending that familiarity to those who visit. Despite its corporate umbrella, staying at Tranquil Timbers is one of only a few obvious options for long term camping in an RV in the area.

Our experience at Tranquil Timbers was an interesting one. We should have known right away that it would be quirky when the really nice lady who took our reservation told us that “the owners” (Encore) of the campground would want full payment as the deposit, rather than the general twenty dollars or one night’s stay — or often nothing — required for a reservation. Furthermore, to add to the quirkiness, we thought that we had acquired a full hookup with water, electricity and sewer access. Instead, we arrived to find that we only had water and electricity. A honeywagon is available Mondays, Tuesdays and Thursdays, but not on the weekends, and costs ten dollars each visit, which is less than what it costs at Badgerland in Stoughton, but is not nearly as readily available. As many of you may have read in The Art of (Our) Camping post, our grey water tank fills up quickly; having the ability to empty it easily is of great help as free-flowing water allows us to do dishes, wash hands and brush teeth when we need to do so over a long period of time. The lack of availability of truly full hookups at this campground is a major downer. For the record, the honeywagon man was really nice, and very helpful, offering tips for maintaining our grey and black tanks.

Another interesting aspect of this campground was its obvious shift toward seasonal camping (keeping one’s rig parked in one place for an entire season), as well as the push for zone camping (membership-based camping) in other campgrounds that fall under the corporate way of being. Neither of these ways of camping suits us. It is a clear example of the shift in camping as reported in The Art of (Our) Camping, where general, familiar “transient”/tenter camping is declining and is being replaced by standard, consistent, seasonal campers. Their way of life is much different than that of recreational campers, and it is very obvious at Tranquil Timbers.

Nevertheless, we were able to enjoy our experience there, too. Luna loved the pool no matter how many times its sandpaper-like exfoliating floor scraped our knees and toes to occasional bleeding. Pool time was really fun; it was clean, and so were the surrounding areas, including the bathrooms and showers — the latter being hot and free! The store, open only occasionally, was active and interesting, and was the source of many other activities, such as miniature golfing and horseshoes.

We met so many people there and made lots of new friends. The more empty recreational campsites became the “field” where many of the kids and adults — including mine — played tag and giggled hard and incessantly, soaked in kid sweat and sticky hair. Many of the seasonal folks were kind as well, but many of them kept to themselves or completely disappeared over the weekend as the vacationers came into camp. There was a Saturday night DJ/dance party event in the pavilion that weekend, unbeknownst to us. If I were a seasonal camper, I probably would have left as well. Thumping music doesn’t do much for tranquility in the trees.

Also, WiFi disruption was a huge issue for us at Tranquil Timbers, so we resorted to taking turns in town at Kick Coffee Shop or across the street at Starboard Brewery for better connectivity. However, there is a gated campground entrance and lots of places to take walks. There is also a direct path to the Potawatomi State Park beginning at one end of the campground, and what a treasure that is. If one needs to leave the bustle of in-season campground noise or a place to blow off WiFi connectivity frustrations, easy access to this spectacular trail and park will help.

The greatest gift that came from our stay at Tranquil Timbers came from the pressure-cooker environment it created for us. Lacking in some basics that we knew might be critical when we need to work and write more, Tranquil Timbers validated what we know to be essential for us on this journey, for, without them, there was increased stress. In order for us to maintain balance and flow to the best of our abilities, we will need to have full hookups, great WiFi or in the vicinity of it, a water source or hiking trails for play and rejuvenation and family ownership of the campground. If we are able to find these for long stretches at a time, then we will be able to go off the grid in between and more often during our travels. We are thankful that we stayed there, because it did help us figure out what we don’t want, what we do need and what we will seek as we continue on our excursion. Peaceful, quiet and more modern facilities are what we have in mind.

What We Learned/Would Do Differently

Luna: Because the pool.

Liza: I liked the farm market and found the forest enchanting. I am thankful for forest preservation.

Scot: Direct access to Potawatomi State Park right from the campground was a pleasant treat. We took a family hike there and I ventured out on a trail run two different times. I feel like a trail runner again. Oh, one more thing — the “storm” that came through was intimidating, but turned out to be a cool breeze with light rain. 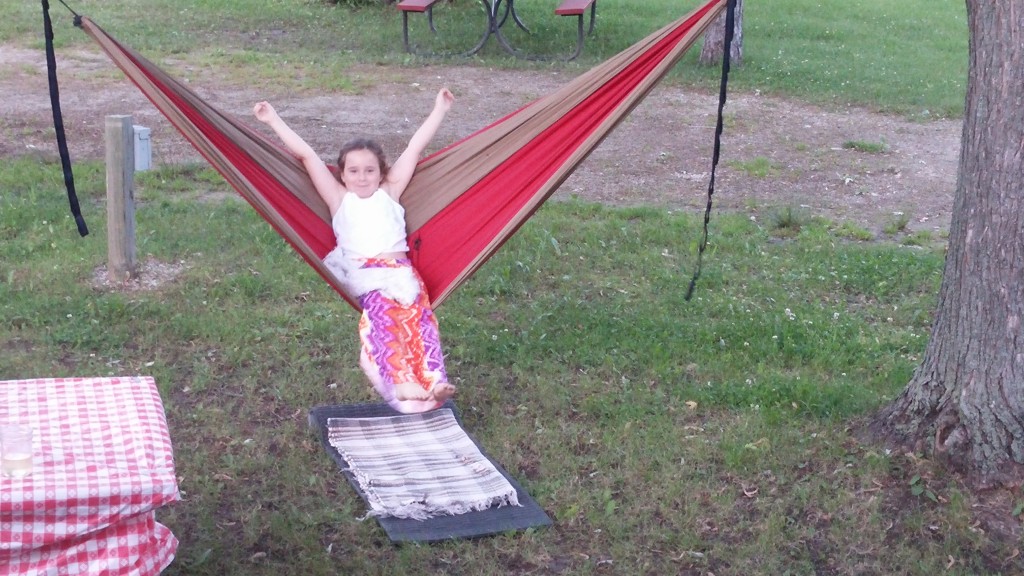 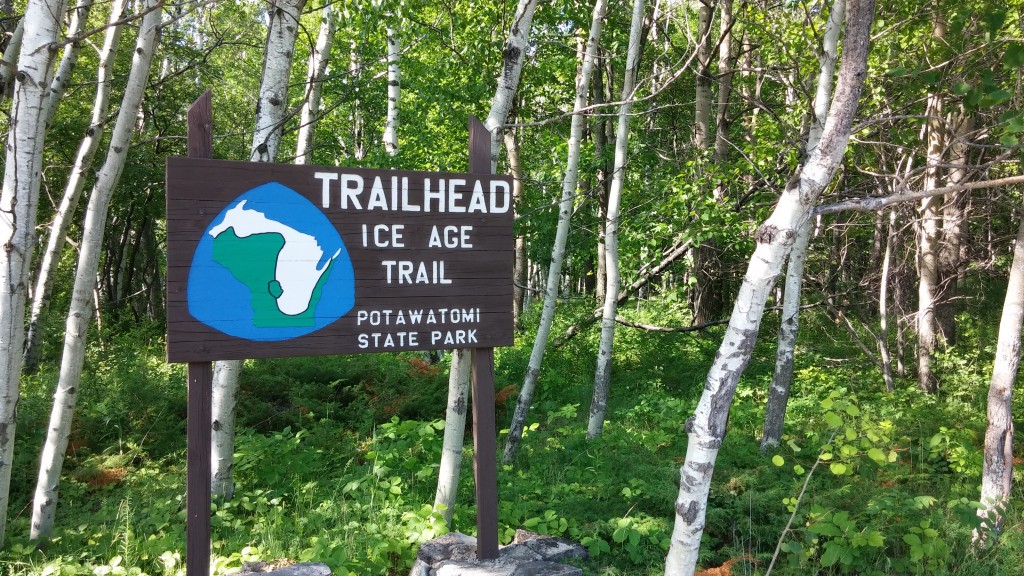 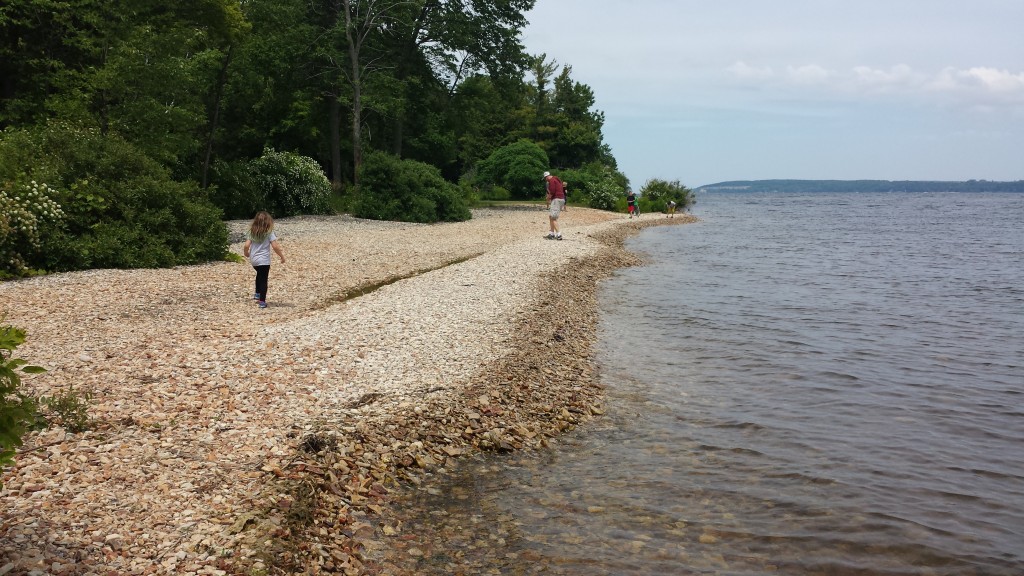 Along the Rocky Shoreline 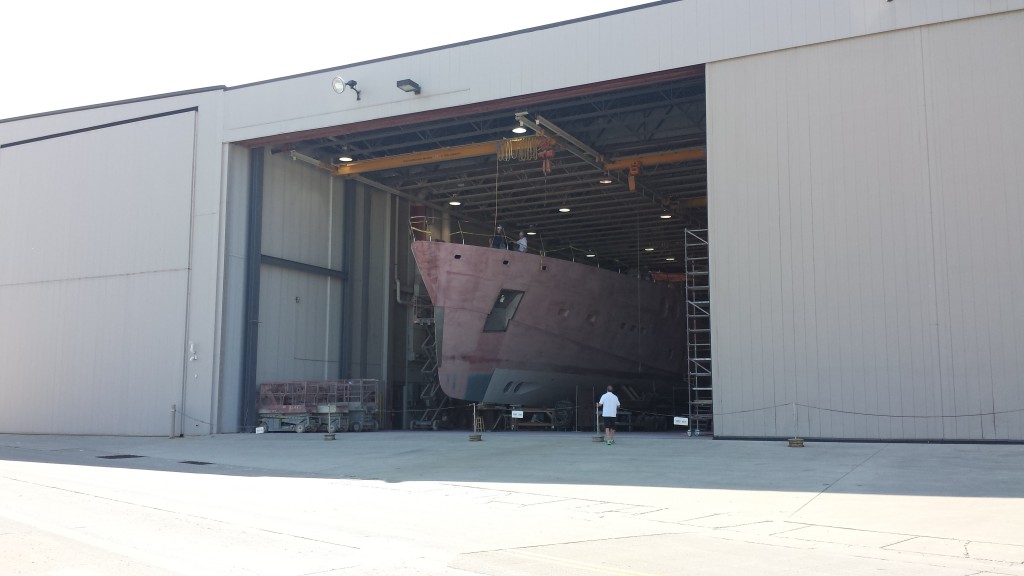 The Next Palmer Johnson Yacht. 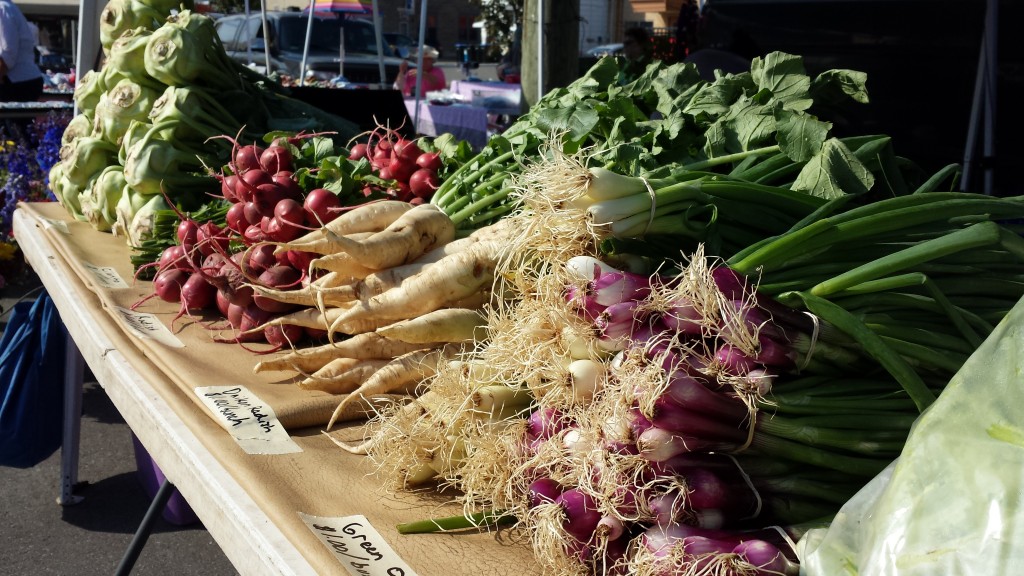 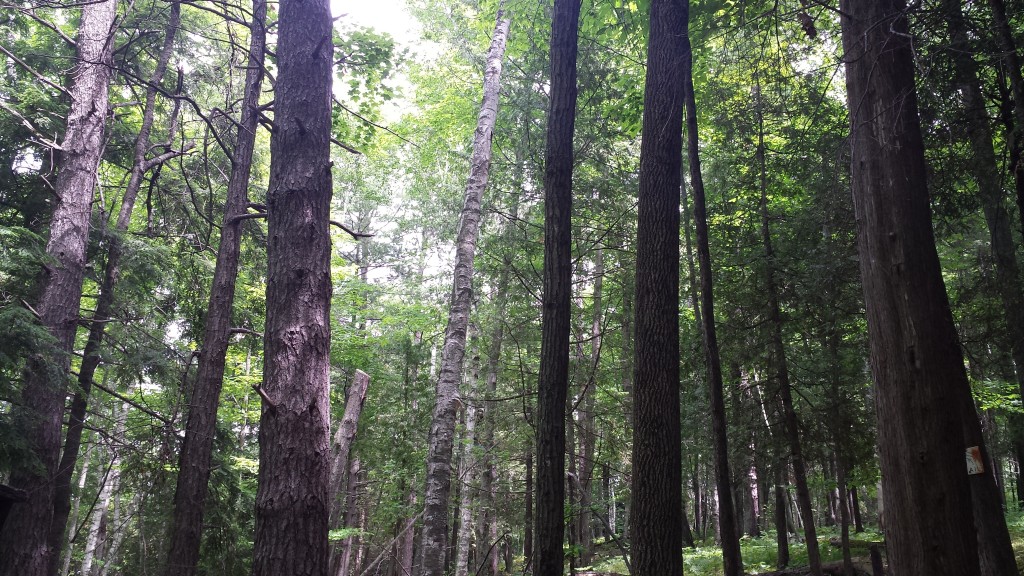 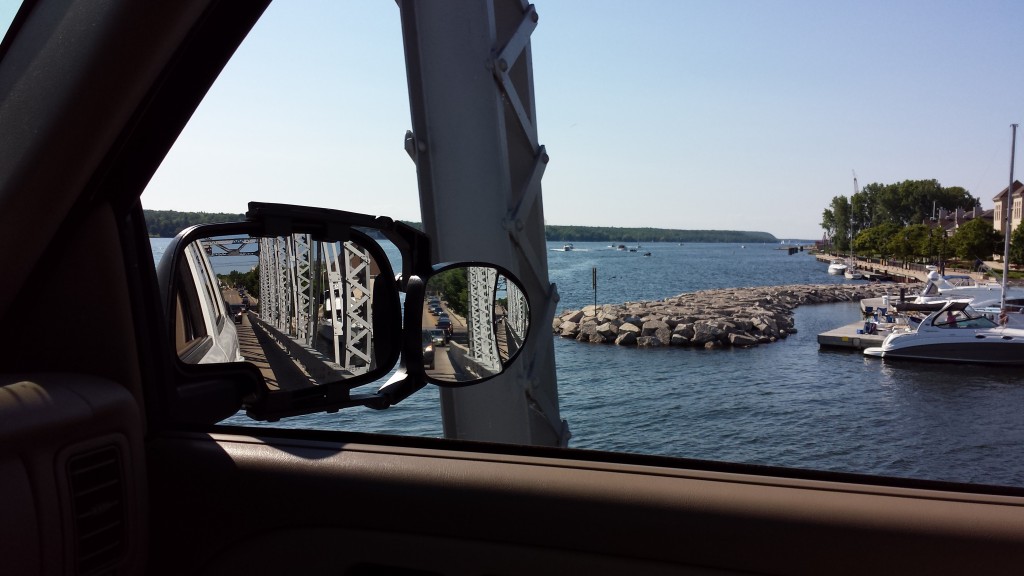 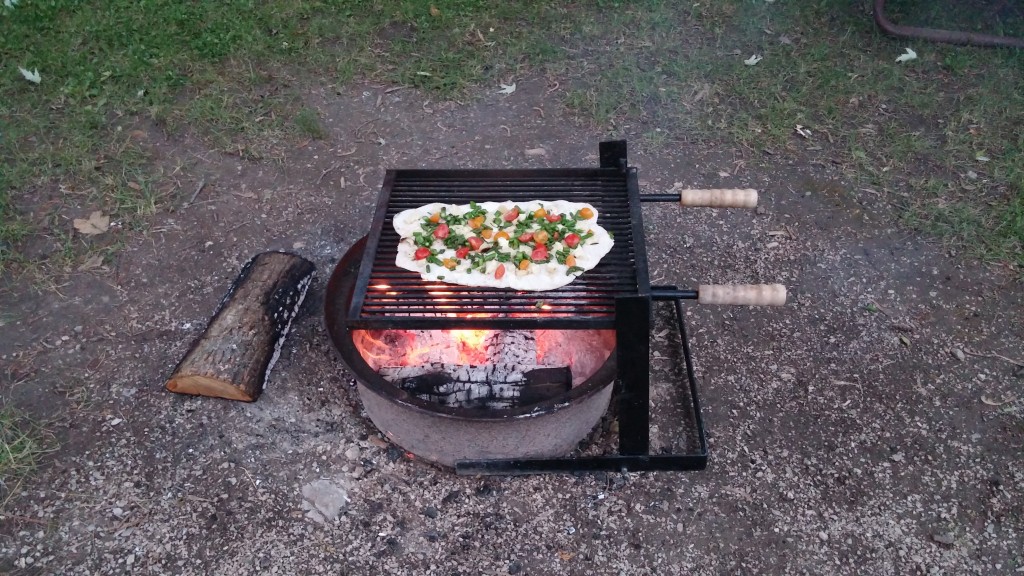 Yet Another Pizza Pic with Local Farm Market Goods Atop It. 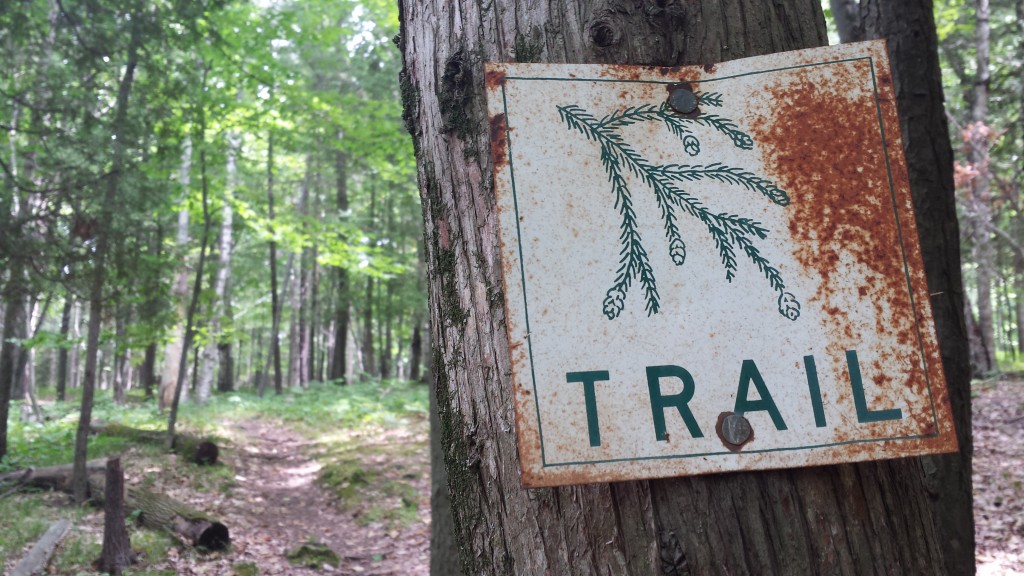 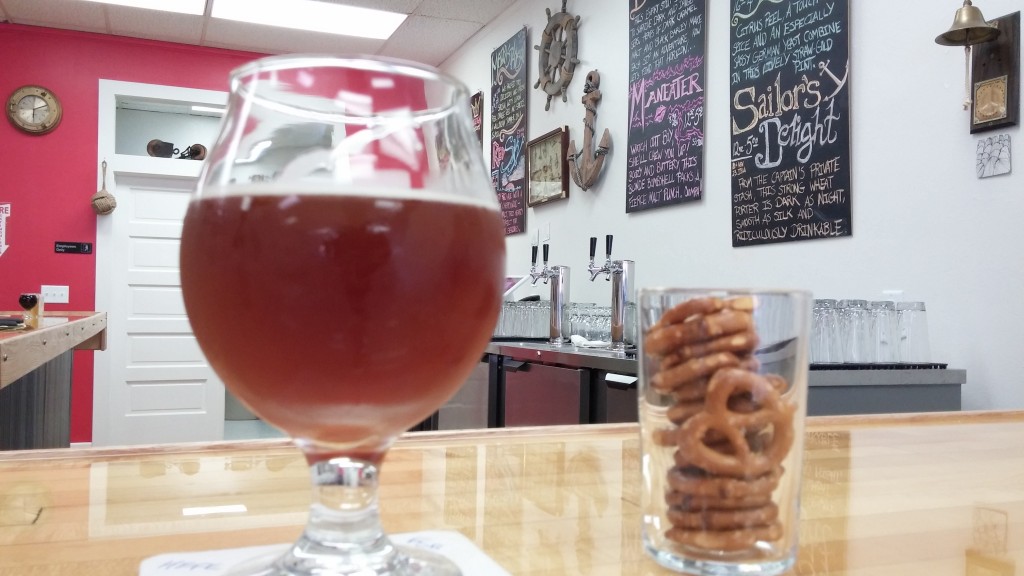 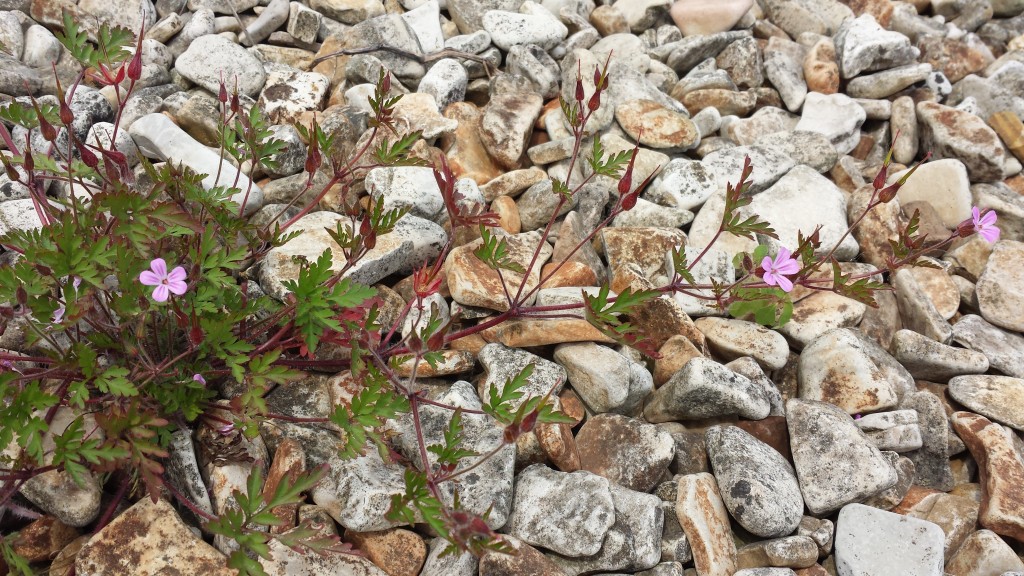