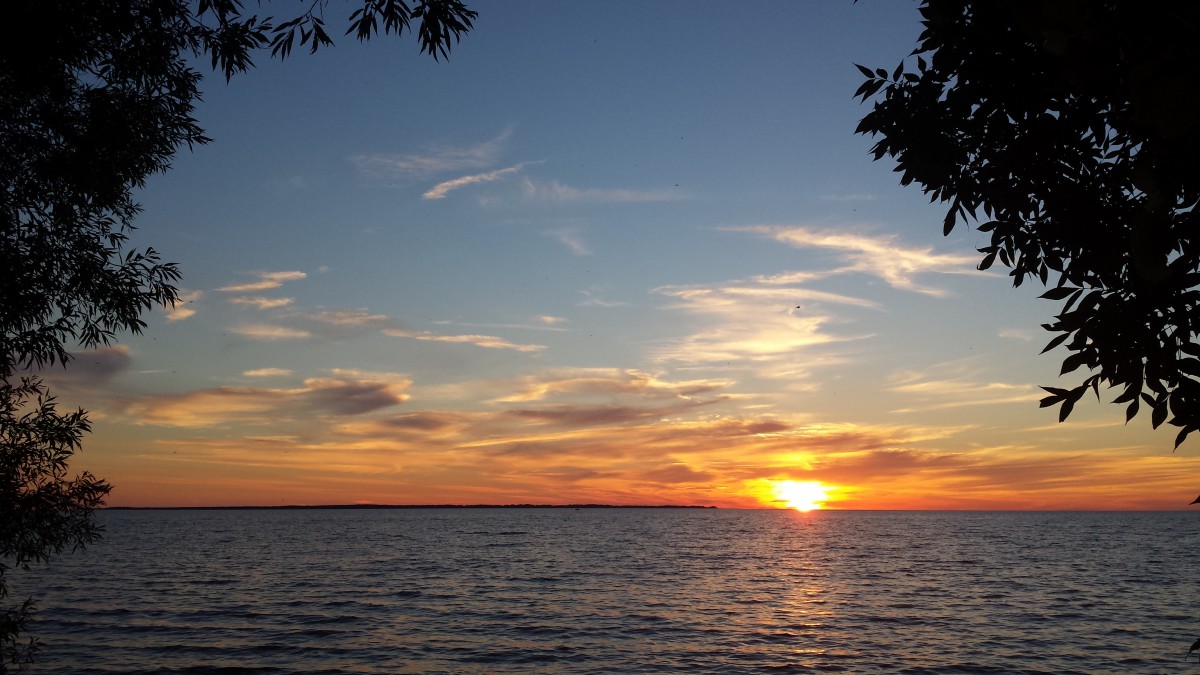 We wanted to spend a little more time on Lake Ontario before heading to the Adirondacks and Vermont, which meant that we would need to work some domestically and digitally. Staying too far north toward Canada increased our chances of decreased connectivity (we heard lots about those sneaky roaming charges). Furthermore, Scot had visited the southern part of the Adirondacks once upon a time; we wanted to visit Saranac Lake and Lake Placid, which meant that we did not want to head too far south. So we picked a place that looked pretty good and received good reviews from fellow travelers. We went to an island.

A Bit About the Region

The Thousand Islands are an archipelago of over 1,860 islands in the Saint Lawrence River at the Canada – U.S. border in the northeast corner of Lake Ontario. The chain is made possible by mostly igneous rock established by ancient volcanic activity of the Canadian Shield, a branch of which travels south toward the Adirondacks, albeit very slowly. The shield covers half of Canada to the Arctic and much of the upper northeastern United States. Once an an extremely mountainous region and containing some of the oldest volcanoes on Earth (extinct, obviously), the Thousand Islands and the surrounding area are in a state of “post-glacial rebound,” which helps increase the flow of burgeoning watersheds and visiting waterfowl. Covered with just a bit of soil, the rock makes for gorgeous landscape mostly suitable for mining. (Wikipedia)

If you pull out an atlas, you easily can see the chain of islands dumping out of the Saint Lawrence. They are dotted with landmarks, state parks and island names. Regarding the Thousand Islands, most remarked that it is lovely or pretty or that there are many things to do. Indeed, there are castles, hotels, estates and homes, built or bequeathed by wealthy folks of old, a bit like what was established in Newport, Rhode Island. Singer Castle and Boldt Castle are well-visited Thousand Islands landmarks, and Wolfe and Wellesley Islands, too. It is also a place for hikers, vacationers, bird lovers and boaters.

If you are interested in shipwrecks, this is also the place for you. The Thousand Islands make for treacherous waterways due its many rocks and shoals and many wrecked ships are visible from the surface. Careful navigation is required despite clear waters made possible by the abundance of algae-eating zebra mussels, and nighttime navigation of the islands is not recommended at all. These Great Lakes sure do have their stories.

And, yes, it is true: Thousand Island dressing is said to have come from this very region. 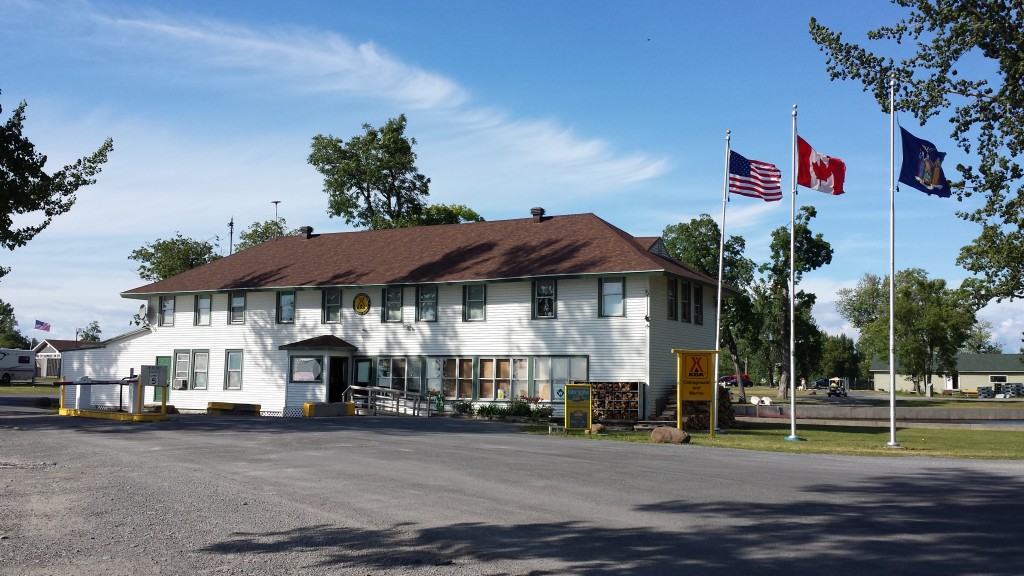 There were, of course, many camping options for us, but we needed an all-inclusive stay for this last romp on Lake Ontario as we were planning on extended camping. Scooter possibilities, lake access, laundry facilities, a pool and a strong WiFi connection, whether at camp or in town, were all on the list. If one is able to choose to stay on an island on Lake Ontario, one chooses 1000 Islands/Association Island KOA.

If there had been an alternate version of Dirty Dancing — you know the one shot in the Catskills — one that might have included a campground and a marina, it might have been filmed on 1000 Islands/Association Island KOA on eastern Lake Ontario in Upstate New York. Large, secluded and scenic, and dotted with old clubhouses, barns, lodging, a tennis court and shuffleboard area, pool and pool house, this KOA has an air of something glorious and romantic once. I can just hear Mickey singing, “Sylvia, how do you call your loverboy?”

On the map, the island dangles into the water. In person, Association Island is accessible by land bridge after a rural jaunt. It is surrounded by water that offers an almost constant light breeze that sometimes roars, as well as up front and personal views of sunrises and sunsets by traveling from one side of the island to the other. The campground is enormous and, for the most part, quiet. Overall, it made for a pleasant stay.

There were several upshots to staying at the 1000 Islands/Association Island KOA. One was that there were few neighbors in our section of the campground. On average, there were twelve empty sites all week long. Our site was located on the marina, and that, too, was quiet. The enormity of the island made for long walks or jogs next to Luna’s scooter rides. The pool was fun and a treat, and Luna played with lots of new kids, while I chatted with some new adults. The vistas were outstanding. Lake Ontario and its quietude continued to be breathtaking and fulfilling. We were happy to be so closely in touch with it again.

There were also a few peculiar downsides to this campground. Firstly, there was hardly a staff member to be seen. Occasionally we were visited by some young men, who picked up trash or recycling, or did a bit of yard maintenance here and there. No one ever came out to supervise, except the one time another young man came out to tell me that Luna needed socks on the jumping pillow. But the jumping pillow became a bit dangerous with so many unsupervised kids, especially during the hours allotted to little ones, and the socks actually made for slippery activity. We ended up avoiding the jumping pillow altogether.

Furthermore, folks and lots of kids driving golf carts and motorized scooters or mopeds kind of had their way with the long roads encompassing the campground. Too fast, too close and generally disrespectful toward pedestrian traffic, we found motorized traffic — other than towing vehicles — to be too much for this campground. Again, there was no one to monitor such events, so we just tucked in close to the sides of the road.

Word has it via this KOA’s site that Association Island used to be “a corporate retreat for GE, a YMCA and an Olympic sailing center.” The absent franchise owners converted the sixty-five acres of island to three hundred campsites and are still renovating the grounds, and some folks said that lots of changes are in store. The changes are evident and it certainly has its charm. In a few years, this KOA could be remarkable.

Our WiFi connection went in and out, so Scot had to work in the closest large town Watertown for a few days, but Luna and I had plenty to do, including laundry. Mostly, we played and swam and walked and talked on the island. Luna is working on her aquatic handstands and talking underwater with other kids. I am enjoying reliving some of my fun pool memories while watching Luna create hers. Camping and the time available to just be has bonded us more than ever. 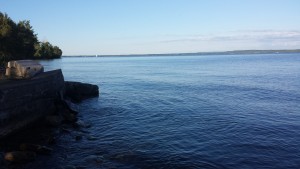 Pool Time is for the Birds. 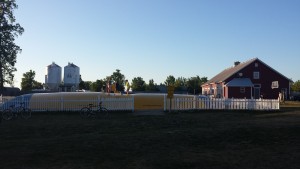 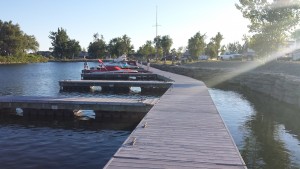 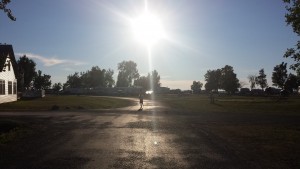 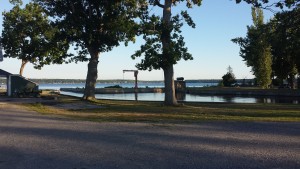 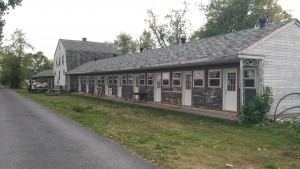 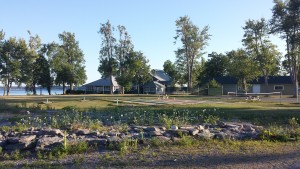 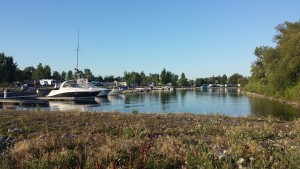 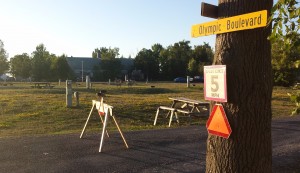 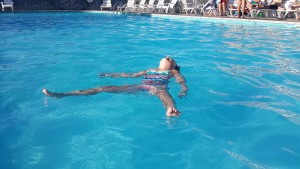 Complaints are few regarding this KOA. Despite many seasonal and transient campers, we really did feel as though we had the place to ourselves and certainly understood what has captivated so many about this Great Lake. Lake Ontario, with so many Canadian and American neighbors, creates a place of being, so it seems, and variety. I felt as though my brain and my insides received a little massage. Makes me want to hum a little bit.

5 comments on “A Final Stay on Lake Ontario in Thousand Islands, NY”